Many scuba divers pass through Bali for its wealth of tourism offerings. Here you can visit temples, trek along volcanic slopes, enjoy all manner of watersports including some great surf, and potter around the artisanal markets to find quality arts and crafts. Other popular Indonesian tourist destinations include Java, Lombok and Sulawesi.

Spanning 2 continental land masses across the Wallace Line, as well as bordering 2 oceans, Indonesia is a vast and diverse country. Made up of more than 13,000 islands forming 2 parallel chains, the country stretches along the equator from Sumatra in the west to Papua in the east. On land, there are vast equatorial rain forests with orang utans, cassowaries, birds of paradise, proboscis monkeys, tarsiers, sun bears, clouded leopards, fruits bats, and endangered animals such as the Sumatran tiger, Javan rhinoceros, and Bornean elephant. It is also home to the Komodo dragon – the largest monitor lizard in the world. 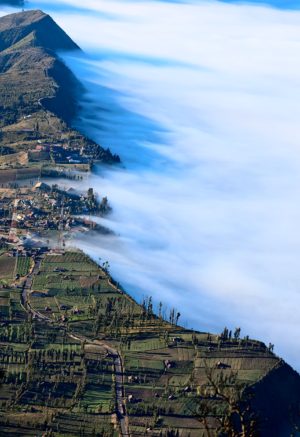 Being situated at the epi-center of the Coral Triangle, and hosting the Ring of Fire – a huge chain of volcanoes that constantly feed nutrient-rich lava in to the seas, the marine life of Indonesia is the most biodiverse on Earth. The seas are full of amazing creatures, many of which are endemic. Scuba divers will marvel at the vibrant coral reefs, populated by wobbegongs (carpet sharks), epaulette (walking) sharks, the blue-ringed octopus, Banggai cardinalfish, painted frogfish, devil scorpionfish, mandarinfish, pygmy seahorses, boxer crabs, sea apples, tiger shrimps, we well as being among the top places in the world for encounters with diver bucker-list creatures such as whale sharks, manta rays and sunfish. Many experienced divers will tell you that the dive destinations of Indonesia are the best in the world.

The people of Indonesia should not be forgotten either. The cultures of the archipelago are equally diverse, which reflect the ethnic diversity of its people, from the Asmat wood-carvers and Korowai hunter-gatherers of Papua, the Toraja of Sulawesi, to the Bajau sea gypsies and the Lamalera whale hunters of Lembata. Then there are the fascinating and ancient Hindu temples and traditions of Bali and Java, as well as Muslim, Christian, and Animist populations.

So much to see and do in this incredible nation. Tourism contributes almost 5% to GDP – a significant amount considering Indonesia is also rich in petroleum, natural gas, and being the world’s largest producer of palm oil. But the arrival of COVID-19 changed all of this. The first case of COVID was identified on 2 March 2020, and within 1 month the virus had spread to all 34 provinces of the country. From 2 April 2020, Indonesia denied entry to all foreign visitors. Despite this, to date there have been over 6,000,000 cases, which is the second highest in South East Asia, but also thought to be wildly understated. Reported COVID deaths stand at 155,000, the 9th highest in the world, but official deaths per million are way down at 558 – ranking the country at 124th worst. However, the reality tells a very different story. Excess deaths are well over 650,000 – more than 300% more than the official declarations, and which puts the country in the 50 worst-hit in the world. There have been big waves in July 2021 and again as recently as February 2022.

The government attempted to avoid a nationwide lockdown and instead implemented a red/yellow/green rating system to be applied to affected regions, and which marked a level of social restrictions to be enforced to each region. It responded well in declaring an IDR 405 trillion COVID-19 budget to protect against the expected economic crash by assisting small and medium sized businesses, as well as improve healthcare across the country. The government also responded pro-actively by introducing a stimulus policy, aimed at helping the tourism sector. All of this should be applauded, from a government that at least seemed to understand the likely impacts of the global pandemic on the livelihoods of its people.

To date, 58% of the Indonesian people have been “fully vaccinated” and this, together with the huge drop in cases in March, and the desperate plight of the people whose lives are closely tied to tourism, prompted the government to finally reopen its borders to tourists without quarantine requirements on 23 March 2022, after a successful 2-week trial run in Bali. Current requirements include proof of “full vaccination” and negative RT-PCR test results within a maximum of 48 hours before departure from country of origin. Non- or partially-vaccinated people must undergo 5 day quarantine with mandatory RT-PCR test on day 4. Full and latest details can be found on the visit the Wonderful Indonesia, Ministry of Tourism

Some operators in the scuba diving industry endeavoured to continue working through the pandemic by offering discounted packages to locals and expats, but the lifting of travel restrictions was greeted with great relief by all. Some liveaboards and resorts are already up and running, but most are targeting restart dates in April, May and June, choosing the Komodo liveaboard season to begin operations again.