Belize is one of the most popular tourist destinations in Central America. This small country used to be known as British Honduras during colonial days and its historic days are reflected in the country being the only one in Central and South America where English is spoken as a first language. Its protected rainforests are popular places for tourists to see some of its wildlife such as jaguars, monkeys and toucans. There are many ancient Mayan ruins hidden among the foliage. 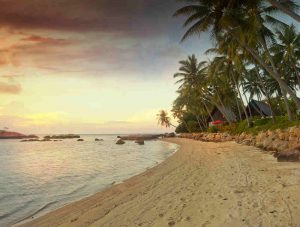 Running along the coastline are 450 offshore cayes and the Belize Barrier Reef – second-largest barrier reef in the world. Ambergris Caye is its most popular tourist location in the Caribbean Sea. It’s a great place from which to sample some local Caribbean culture. Turneffe is remote atoll with several dive resorts where you can enjoy some fabulous scuba diving, as well as explore its natural wonders, such as manatees, dolphins, and saltwater crocodiles. The more distant Lighthouse Reef is one of the most colorful reefs in the Caribbean, and nearby is the natural phenomenon known as the Great Blue Hole – a “must do” for every scuba diver.

Tourism has grown exponentially in recent years and now accounts for 45% of GDP in Belize. COVID was first identified on 23 March 2020 and a State of Emergency was declared on 30 March 2020 across the country, as well as a curfew. Its international airport was closed to all except returning residents and cargo, and this seemed to have the desired effect because total confirmed cases remained very low and have only reach 15,000 until now, and a total of only 350 deaths. There has only been one minor wave of cases over December 2020-January 2021. As a result, Belize had a phased re-opening of its borders on 31 May 2020 and remains open. All visitors are required to present a negative COVID-19 test result upon arrival. Further information can be found here: Belize Tourism Board entry requirements

. Roughly 17% of the population are currently fully vaccinated.

Often at the top of the wishes of divers that visit Belize is to dive at the Blue Hole. The best value for money option to dive here is to join a 1 week Belize liveaboard cruise. These tours depart from Belize City and spend time at the best dive location in Belize – Lighthouse Atoll. The reef is by far the best in Belize, it is very healthy and colorful, and has great marine diversity – both in terms of large and macro life. These cruises also visit Blue Hole and Turneffe Atoll.

A second option is to stay at one of the remote dive resorts on Turneffe Atoll. Eagle rays, turtles, dolphins, manatees and toadfish are just some of the species that are home here. The diving is good and there are some activities on the island, based on the wonderful nature, like kayaking etc. It is the more expensive option and all-inclusive packages have fixed twice-weekly start-end dates, and depart from Belize City. The resorts include a trip to the Blue Hole and Lighthouse Reef once per week.

You could also stay at a resort in Ambergris Caye. This is a bigger island and the main tourist center of Belize. There are more typical tourist things to do there. It has more economical accommodation options. but the diving is not as good as it is at Turneffe. The dive center tries to run day trips to Blue Hole/Lighthouse twice per week, but runs when there are enough guests. The journey time is a couple of hours each way.

Whichever option you choose, you’re sure to have a great time in Belize!