A New Discovery In The Great Barrier Reef! 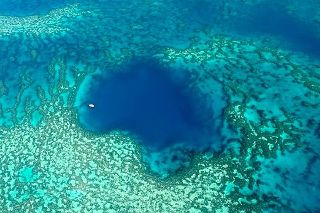 The largest coral reef ecosystem on earth, the Great Barrier Reef, has revealed a spectacular and previously unknown jewel. The sapphire-hued blue hole was discovered by marine biologist and underwater photographer, Johnny Gaskell.

Blue holes are underwater sinkholes. They are formed when carbonate bedrock drops deeper than the surrounding seafloor. Blue holes are characterised by their depth in relation to the surrounding limestone or coral reef bedrock and their spectacular deep blue tone. Notable blue holes are the Dragon Hole (a whopping 300m deep) and the 300m wide Great Blue Hole of Belize.

Gaskell, a resident of the Whitsunday’s, described his find on his Instagram account, “After spotting this deep blue hole on Google Maps we decided to head far offshore, out further than our normal Reef trips to see what dwelled within.” And what a find it was! At depths of 15-18m the divers discovered pristine colonies of giant birdsnest and unusually long Staghorn corals. 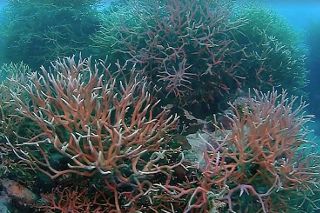 Gaskell added “The position of this deep hole within the lagoon walls has obviously protected these corals for decades.” This protection enabled the corals to remain intact despite the area being hit with a category 4 storm, cyclone Debbie, in March. He went on to comment, “We may very well be the first to ever dive Gaskell’s Blue Hole as it was so far offshore and hidden deep within one of the Great Barrier Reef’s biggest lagoons…”

The dive site co-ordinates are yet to be shared, however we are sure many an avid Ozzie diver is now perusing Google Maps. Time will tell if the self-proclaimed name, Gaskell’s Blue Hole will stick…. Irrespective, this is fantastic news that shows the world that the Great Barrier Reef has secrets to share and the picture painted by the media on the state of the reef is not as dire as some would like you to believe.