Australia is a country in Oceania, bordering the Indian and South Pacific oceans. It is comprised of its continental mainland, the island of Tasmania, and several small islands. It is the 6th largest country in the world, with low plateau deserts in the centre, tropical rainforests in the north-east, and mountain ranges in the south-east. Being such a large country, there are a number of attractions. City breaks are very popular, especially to Sydney, Brisbane, the Gold Coast, Perth, and Melbourne. Sydney is home to its iconic opera house building and harbor bridge, as well as famous beach areas such as Bondi and Manly. Melbourne is the cultural centre of Australia and its attractions include sporting events, art galleries, live music, festivals and fashion events. It has won many awards, such as the world’s most livable city … 7 years in a row. 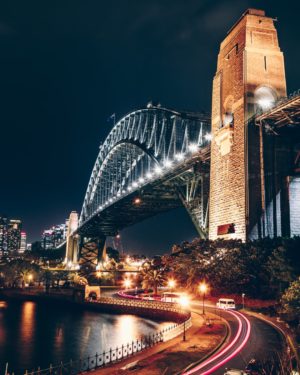 Regional attractions include Queensland and the Great barrier Reef – the world’s largest coral reef. Many scuba divers visit Australia to explore this astonishing natural wonderland. Uluru (previously known as Ayer’s Rock), Aboriginal tours, and the Australian wildlife are also popular choices. More than 80% of its plants, mammals, and reptiles are endemic. Some of its best known animals include kangaroos, dingos, wallabies, wombats, koalas, platypuses and echidnas. Then there is the Tasmanian devil, the kookaburra, cassowaries, crocodiles, and the country is renowned for its long list of poisonous snakes and spiders!

In recent years there were around 9 million international visitors to Australia, ranking it 11th in the Asia-Pacific region, and in the top 40 most popular countries in the world for tourists. Tourism normally contributes just over 3% to GDP. One of the main issues that Australia faces is its location – it’s a long way from Europe and North America, which means that domestic tourism is highly significant. The most common inbound arrivals come from China, New Zealand, the United States, the United Kingdom, Japan, and Singapore.

Perhaps the relatively low significance of international tourism to the national economy influenced the government’s decisions when COVID-19 was first detected on 25 January 2020. Australia followed a zero-COVID suppression strategy until late in to 2021. This included exhaustive and futile contact tracing which forced the economy in to its first recession in 30 years. In March 2020, the government declared a human biosecurity emergency and closed its international borders to all non-residents; many states followed suit. Returning residents were required to spend 2 weeks in supervised quarantine hotels. These measures led to tens of thousands of Australians being stranded overseas, leading to criticism from the UN Human Rights Committee. State governments closed “non-essential” services but outbreaks continued to occur and state governments continued to respond with more and stricter lockdowns.

Australia endeavoured to form a travel bubble with New Zealand, kits most important economic neighbour, allowing people to travel between the 2 countries. But further outbreaks in 2021 caused even this to close. Australia also opened several quarantine facilities where international arrivals, both foreign and returning citizens, were held. Draconian measures were also passed which allowed the forced internment at these centres of residents that tested positive through “track and trace”; these facilities were described as like prison camps.

The statistics to date indicate that cases were suppressed until late December 2021, when they spiked with Omicron, causing the government to accept its zero-COVID strategy failure. So far there have been just over 5,000,000 confirmed cases. After 2 small waves and the current wave, official deaths stand at 6,500, and a very low fatality rate, ranking 147 in the world. Excess deaths match the official COVID deaths very well. The vaccination roll out in Australia was heavily criticized as being very slow, but by now over 83% of the population has been “fully vaccinated”.

Now that the government has accepted that COVID is endemic, Australia announced on 21 February 2022 that is was re-opening its borders, much to the relief of all involved in travel and tourism. Vaccinated visitors do not need to quarantine, but unvaccinated travellers must do so in a hotel for up to 14 days at their own expense. For all the latest COVID entry requirements, visit: the Australian Department of Health website

Some of the scuba diving operators endeavoured to continue through the pandemic by offering discounted packages to residents, but their efforts were thwarted by the constantly changing lockdown rules and state border closures. But now our Australian liveaboards are fully operational and awaiting your visit.