Some big, powerful western countries could learn a thing or 2 from Belize. This developing nation is leading the way by placing its environment front and center and has announced bold legislation to stop oil exploration in all of its waters. 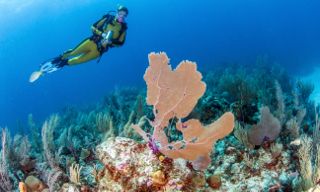 The small nation is choosing its reefs over oil. 10% of its gross domestic product (US$ 200 million) comes from its tourism industry. The reef is the country’s biggest tourist attraction and provides invaluable employment. More than half of the country’s livelihoods are supported by industry relating to the reef.

“Belize is a small country making a mighty commitment to putting the environment first,” says Nadia Book, a reef scientist with the World Wide Fund for Nature (WWF), an organisation that campaigned for the protection of the reefs. This spectacular natural resource is a 300 km long stretch of coral that forms part of the 900 km Mesoamerican Barrier Reef system. The Belize Reef was recognised by Unesco in 1996 when it was inscribed as a World Heritage Site. Belize not only offers divers the Belize Reef, the country can also claim 3 out of the 4 atolls in the Caribbean. The atolls include Lighthouse Reef, Glovers Reef (also a World Heritage site) and Turneffe Reef.

With such forward-thinking and commitment to conservation and a variety of diving destinations, Belize is sure to deliver. Whether you are interested in diving a natural wonder that can be seen with the naked eye from space, having encounters with dolphins, manatees or sharks, or witnessing migrating pilot or killer whales, Belize is the vacation destination for you.

If you are interested in experiencing Belize diving let us know and we will make it happen! send us an email.