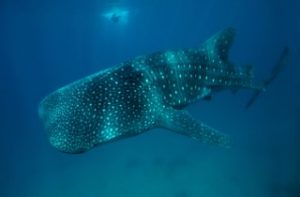 Whale shark in the Philippines

The whale shark is the world’s largest fish, capable of reaching 20 metres in length and living for over a century. They do however, grow slowly and reach maturity quite late (25–30 years old). This is one of the reasons why they are, and have been, subject to overexploitation, particularly in the Indo-Pacific. In the Philippines, the whale shark was hunted into the late 90s as demand for their meat and fins from East Asia increased. The butanding, as it is commonly known in Tagalog, suffered greatly from these fisheries, as well as from other targeted fisheries operating from Taiwan and China into the 2000s. The Philippines took early charge in their conservation, protecting the species in 1998 and setting a precedent that endures today.

The country now hosts the second largest known population of whale sharks in the world, across various hotspots in the country, one of which is in Pintuyan, Southern Leyte, where whale sharks visit seasonally to feed on plankton-rich waters close to shore. Scientists have tracked whale sharks moving between the Philippines and neighbouring countries including Taiwan, Malaysia and Indonesia. The species is highly mobile and can normally travel about 10,000 km a year! So their management and conservation is deeply dependent on collaborative work within countries and beyond their borders. 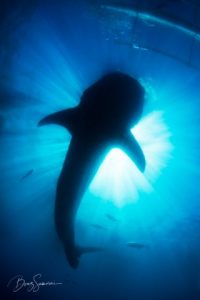 In 2017, the Philippines proposed to list the whale shark into Appendix I of the Convention on Migratory Species of the United Nations in an attempt to raise the profile of this Endangered species and prompt international collaboration. The most persistent threats to whale sharks include illegal targeted take and bycatch, vessel collisions that might lead to injury or mortality, and unsustainable tourism that might affect their habitat use (e.g. if they are feeding and aren’t able to do so in the presence of tourists). To tackle the latter one, the Philippines passed a Joint Memorandum Circular in 2020 by the 4 management ministries under whom the whale shark falls, to regulate all marine megafauna interactions including the whale shark. Steps like these highlight the Philippines as a champion for the species, not only regionally, but also globally. Did you know that Donsol in Sorsogon province was the first ecotourism site with whale sharks in Asia?

Much of the historical hunting took place in the Visayas and northern Mindanao, where whale sharks were known to occur on at least a seasonal basis. During an expedition trip

onboard the Atlantis Azores

, you will follow the journey of the whale shark from Negros Oriental, through Cebu and into Southern Leyte, and returning through southern Bohol. With luck, you will encounter these magnificent giants and marvel at their natural beauty, while always following the local code of conduct. The whale shark has many names in the Visayas, including tiki-tiki, tawiki, taloki and tiriki-tiki. Many of these are derived from the local house gecko, given their spotty appearance. The butanding is a source of national pride and admiration, and hopefully you will participate in this culturally and soul-enriching experience.

Categorized under: Philippines, Scuba Diving
Tagged under :
Published 5 May 2021