Swimming with the Largest Fish in the World

If you have been there then you know. If you haven't, then it is difficult to describe the feeling of sharing the water with this, the biggest fish in the sea. More like a whale than a shark, these fish are right at the top of most divers "To do..." lists. The best dives in the world for swimming with whale sharks have been visited by Dive The World and you could go there too. Find out more about these mighty creatures and make your dreams come true ...

While some people are intimidated by its size, this shark is actually a gentle giant keen to avoid confrontations and generally trusting of humans. As for etiquette when scuba diving with a whale shark, passive interaction is the best policy.

In fact, aggressive behaviour can drive them away so no touching or swimming after them if you're hoping for one to hang around you. They can be quite friendly. One of our satisfied customers said the encounter had demonstrated distinctly more mammalian than fishy behaviour. 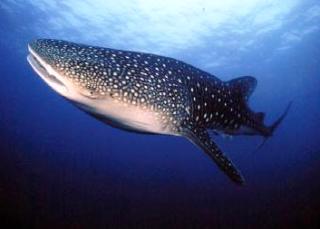 Considered the biggest fish in the world, the whale shark is a cold blooded cartilaginous fish like any other shark. It breathes through gills. Its tail is vertical and moves from one side to another when it swims, unlike warm-blood animals (mammals) which have parallel tails and breathe through lungs like the whale, dolphin and dugong.

Whale sharks can weigh over 9 tons and grow up to 12 metres in length, although there are questionable, unconfirmed sightings of specimens up to 18 metres in length. They can generally be found in the entire Indian Ocean in depths of up to 130 metres.

The whale shark is easily recognised by its immense size and a 2-tone pattern of light spots and lines on a dark brown dorsal surface. Unlike that of most other sharks its enormous mouth is terminal in position and can be opened wide to filter large amounts of water for small fish, squid, crustaceans, and other plankton organisms.

Their skin can be over 10 cm thick.

Not much is known about the habits of these animals. Adults tend to be solitary and nothing is known about how they find each other. Young whale sharks of less than 3 metres live in small groups, but are rarely seen. It is thought that they spend most of their time in the great ocean depths to negate their increased vulnerability. It is unknown what they eat during this time.

Encounters are virtually guaranteed in several parts of the world at the right time of year. In the Maldives sightings are a strong possibility throughout the year in places like Maamigili Beru, South Ari and almost guaranteed during the August to October period in the feeding spectacular at Hanifaru Bay which is found in Baa Atoll. July to December is known as 'whale shark season' in the Galapagos Islands and is obviously the best time to visit there to see the sharks, sometimes several on a single dive. Cenderawasih Bay in West Papua, Indonesia has superb encounters all year round. Djibouti too. Mexico's Pacific coast is another great place for encounters with these mighty fish. They are commonly spotted around Socorro Island and in The Sea of Cortez. If you are planning to dive Belize and whale sharks are high on your priority list then plan for March to June to maximise your chances. Your best bet for sightings in Thailand's Andaman Sea are at sites like Richelieu Rock between February and May.

Other worldwide locations include: the Philippines, off the Seychelles, Christmas Island, South Africa, Mozambique, Honduras and Western Australia.

These filter feeders eat plankton, krill, fish eggs, small fish, salp, jellyfish and coral spawn. Food enters the whale shark's mouth by being sucked in. The water is then discharged via the gills and plankton and other specks of food, anything bigger than 2 to 3 mm in diameter, are trapped against the dermal denticles. The denticles act like sieves, which only let water and very tiny particles through. Everything else is swallowed as food. Every now and again the shark coughs, an action scientists believe is to clear the dermal denticles of food build-up.

They are known as harmless fish and present no threat to either man or the fish that school around them. In fact, their small teeth play no role in feeding at all. The whale shark can take in water through forward motion with its mouth open, but can also gulp in water when it's in a stationary position.

Details about their reproduction and life cycle are few and sketchy. As recently as 1956 it was believed that they are oviparous because of the discovery of a solitary egg sack in Mexico. However, inside a pregnant whale shark that was killed by fishermen in 1995 in Taiwan, over 300 embryos where discovered, ranging in length from 40-60 cm.

Based on that discovery it was deemed that whale sharks are ovoviviparus, because although egg pouches are formed, they stay within the mother's body with no further nutrition from the mother, until they hatch and are born live. Because of this single individual, it is estimated that they reach sexual maturity in their 30's. But much remains a mystery, such as where they go to mate, how often they mate or reproduce, or where they go to give birth.

It's generally accepted that they can live to be over 100 years old.

Other than the ever present threat from man, the adult whale shark has no natural enemies.

What little is known about their migration patterns is known because of the tagging of a few individuals. Whale sharks are in pretty much a constant state of migration, presumably going where the food is, which spans a large area. In general, they prefer the tropical regions around the world with warmer waters between 18 to 30°C where plankton abound, although they have also been recorded to dive deeper than 980m to where the water is as cold as 10°C.

As yet, no mating sites have been found and scientist can therefore only speculate about such things as whale sharks being pretty much loners, only getting together when they mate.

Unfortunately, the planet's largest fish is on the verge of extinction. The World Conservation Union lists them as 'Vulnerable'. In Taiwan, documented catches have declined by 50 to 80% from the mid-1980's to 1990's. In Gujarat, India, 160 whale sharks were landed between January and May 2000 compared to 279 within the same time the previous year. In Thailand, sightings have also declined significantly.

Why is this so, you might wonder? Well, whale sharks are extremely vulnerable to over exploitation by man for several reasons. They have a slow growth rate, only reaching maturity at around 30 years old and living as long as 60 - 100 years. Their reproduction rate is also very slow - long intervals between pregnancies and producing around a few hundred pups at one time. Quite simply, they cannot populate fast enough to keep up with man's consumption.

Whale shark meat and fins are considered gourmet cuisine in some Asian markets where a single fin can fetch up to US$ 10,000. A restaurant in Beijing once sold 3 fins for over US$ 72,000 in November 1999.

A number of non-profit organisations have been campaigning tirelessly to protect the world's largest animal from overexploitation and the very real threat of extinction. Some of them are Wildaid, the U.N. Convention on International Trade in Endangered Species (CITES), and in Thailand, the Save The Whale Shark for the Thai Seas Conservation Club.

... Vic responded quickly and helped us with changes where necessary. Everything ran smoothly on quite a complicated itinerary. There are so many operators it is difficult to find a reputable one and Dive The World has established a good reputation. Brilliant website although I'd like to see more land based options ... -- Stephen Brown, South Africa.  [More customer reviews]