Your Guide to Diving in the Sea of Cortez

The Aquarium of the World

The Sea of Cortez, also known as the Gulf of California, is a 700 miles (1,126 km) stretch of water sheltered from the Pacific Ocean by the Baja California peninsula. As a result, the swells of the Pacific have little effect here meaning the seas are often flat calm.

Within the sea there are thousands of islands, pinnacles and rocks around which are countless liveaboard dive sites.

Underwater you can expect unforgettable scuba encounters with playful sea lions at sites throughout the area. Schools of hammerhead sharks and encounters with manta rays, breaching mobula rays and magnificent whale sharks are also headlining diving attractions of the Sea of Cortez. Cetaceans are commonly spotted and include vast pods of dolphins, porpoises, pilot whales, killer whales and even sperm whales and humpback whales.

Unlike some other dive sites on the Pacific side of Mexico, there are also plenty of smaller creatures to see as well as healthy reef scenes to experience. Reefs commonly feature colorful sponges and gorgonian sea fans and kelp, while you can keep your eye out for creatures like sea horses, nudibranchs and a variety of damsel fish and angelfish. So whether poking around in a hole in the reef or hanging in the water column, gazing out into the blue, The Sea of Cortez will keep you enthralled.


Dive Site Descriptions for the Sea of Cortez

One of the first spots to dive on a northern Sea of Cortez liveaboard cruise is Angel Island. It is a great site for sea lions that may swoop and swim around you like the playful puppies of the ocean that they are. When at the surface the smell from the bird droppings that cake the rock of La Vela, meaning 'the sail', encourages a swift submersion.
Show more

You will descend to the base of the rock which slopes to deeper than 30m. While the Gulf of California is famed for large animal encounters, it also delivers on a macro scale. That is what makes diving in the Sea of Cortez special compared to other locations on Mexico's Pacific coast. Here you can spot various different nudibranchs such as Chromodoris baumanni, Elysia diomedea, Flabelliina iodinea and Glossodoris sedna which is indigenous to the northern part of the sea, although it has been introduced elsewhere. Unlike other places, you might spot dozens if not hundreds of nudibranchs of any one species.

Look out for mobula rays, sometimes hard to miss when traveling in large schools. You may have seen documentaries featuring the Sea of Cortez's mobula rays breaching and soaring into the sky. There is no guarantee of such behavior here but these and other ray species can be sighted at La Vela.

Hundreds of boobies rest and ease their bowels atop Pedro Martir, another pre-dive delight to the senses in the Sea of Cortez. They seem to stare quizzically at these strange humans jumping in the water as they waddle in an ungainly fashion over the rocky land.
Show more

You will most likely drop in here in shallow waters and descend to between 8 and 10m before then making your way down a steep wall to deeper sections of the site at 30 to 40m. Throughout the shallows sea lions are likely to play joyfully all around you, darting this way and that with incredible ease. Particularly fearless and fun are the juveniles, of which there are many in August and September.

The wall can play host to jewel morays and Panamic morays. They are among 16 species of moray eel in the Sea of Cortez and they are often spotted, not only gaping from their holes but also free-swimming.

Divers may also come across seahorses here such as the Pacific seahorse in and around the wall where innumerable blennies poke their heads out, octopus skulk from crevice to crevice hunting, and swarms of little reef fish dance around. These can include Panamic sergeant majors, Cortez damselfish and Beaubrummel damselfish. Occasionally dense clouds of krill may be present bringing with them the promise of whales.

'Las Animas' is named after the church bells which ring to summon lost souls and 'El Lavadero' translates as "the washing machine". When diving "the washing machine of lost souls" it is easy to imagine that each of the thousands of schooling jacks represents a soul as their sheer mass of numbers surrounds you and blocks out the light. Hammerhead sharks and tunas join them in the blue, meaning there is always plenty of big stuff to look out for when diving here.

The topography consists of a pinnacle featuring a series of shelves and caverns that you can explore on the look-out for creatures as diverse as giant jawfish, sea horses and horn sharks. This site is a firm favorite among Sea of Cortez aficionados, yielding not only many different sightings but also being among the most colorful dive sites in the area.


How to Dive the Gulf of California 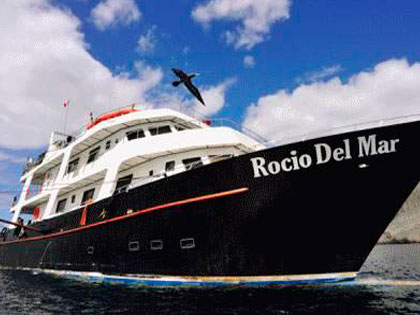 While many of the sites close to shore can be dived as day trips, liveaboards operate here and provide the best means of experiencing all that this wondrous stretch of water has to offer. For more information on the tour options, and all the travel information you might need to visit Mexico, read our Sea of Cortez liveaboard section.

Depending on the liveaboard you choose, you will either board at Puerto Penasco on the Mexican mainland along northern coastline of the Sea of Cortez, or Cabo San Lucas at the southern tip of the Baja peninsula.

There are not many diving safaris operating here so it is common for yours to be the only one in the area. Of course this means you can be sure of avoiding 'diver soup' even at the more popular, closer-to-shore locations where liveaboards can overnight and have you in the water before any daytrip boats arrive.

July to November is the Sea of Cortez liveaboard season, although shore diving is possible year round. Temperatures can vary from site to site and are usually in the range of 70 to 82°F (21-28°C), although thermoclines can make the temperature gauge in your dive computer work hard. For further reading on the climate and water temperature at Puerto Penasco on the Sea of Cortez, visit HikersBay

. Although generally a sheltered stretch of water with calm seas, the surface can become choppy especially when the wind picks up.

Whales sharks are commonly spotted throughout the year with juveniles more frequent between late September and the end of November. At this time they come to feed on the plankton blooms so do not expect great visibility. Large adults are known to show up in the spring months of April and May which is also a time that sees large schools of yellowfin tuna, and schooling scalloped hammerheads.

Sea lions are present all year round. August and September is a great time for scuba divers to play with curious juveniles. In the months prior to that you may witness the birth of this new generation. Gray whales are most commonly encountered between January and March when they seek sheltered bays to mate and give birth. Winter months are also the best time for blue and humpback whales, and between May and July for mobula rays.

Where is the Sea of Cortez and How Do I Get There?

Review our map below of Mexico, showing the location of the Gulf of California. Here, you will find information on how to get to the Sea of Cortez.

... The advice we got from Dive The World was very informative and the staff we spoke to were very helpful. Talking to someone who is experienced with the dive sites and liveaboard operators also helped a great deal. Overall we were very satisfied with the service ... -- Alexander Thrane, Norway.  [More customer reviews]