Your Guide to Scuba Diving in the Maldives

Although the Maldives are known the world over for the stunning beaches and azure waters that typify the tropical idyll, its life beneath the water's surface is becoming ever more respected by scuba divers in the know. The Maldive Islands have some good coral reefs, but it's the abundance of marine life throughout the country that sets it apart from other dive destinations around the world.

Most dives in the Maldives are drifts from liveaboards where you allow the current to move you along. Due to the myriad channels and passages between the atolls, the currents sweep and play throughout the island chain so that nutrients are always on the move. This accounts for the vast numbers of fish enjoying the passing feast and you can expect to see Napoleon wrasse, parrotfish, snappers, fusiliers, jacks and sweetlips at every site where the water flows.

2 main features you are likely to encounter at the dive sites in the Maldives are the current swept channels and the pinnacles that act like magnets for marine life. In the channels, you can explore the caves, caverns and overhangs where soft corals proliferate, and there is a riot of colourful sponges, invertebrates and gorgonian fans all profiting from the nutrient-rich water. There are also plenty of cleaning stations where cleaning wrasses and shrimps service the larger marine species.

Inside the atoll lagoons you often find pinnacles of rock vaulting up almost to the surface. They are known locally as 'Thilas' and are often bejewelled with sessile life forms. These formations bring water up from the ocean floor against their walls, feeding the sponges and soft corals that cling to its sides as well as creating an environment that supports a plethora of crustaceans and schools of resident fish.

Slightly removed from the reefs, you are likely to spot the pelagics that frequent the Maldives, including manta rays and eagle rays and a variety of sharks including the mighty whale shark. Wherever you look there is likely to be something of interest going on and for many it is in the shallows where the best of the action takes place. Here the clear water, brightly illuminated by the sun's rays and playing host to great numbers of fish, provides an ideal environment both for photographers and fun divers alike.

During the El Niño of 1998 some shallower areas of the coral reefs were adversely affected by bleaching. However the accepted view is that while the reefs are returning to their former colourful glory, the larger marine life of the Maldives Islands has never dwindled and indeed many believe it has increased in numbers over the past few decades, at least partly as a result of the nation's recognition of the need for conservation.

This area was one of the first to be discovered for its scuba diving delights and comprises some of the oldest and most popular dive sites in the Maldive Islands including Gaathugiri, also known as Banana Reef. You can expect breathtaking topography with magnificent rock faces, numerous caves, steep drop offs and precipitous overhangs. The marine life is just as awesome with sharks, manta rays, trevally, black snappers, grouper, schooling bannerfish, large morays, squirrelfish, soldierfish and Maldivian grubfish.

This atoll features 6 main channels where marine life thrives. Although the coral is better elsewhere, there are plenty of schools of fish and big pelagics like grey reef sharks, whitetips, eagle rays and manta rays in South Male. There is also an interesting and colourful wreck, Kuda Giri wreck which has been completely colonised by orange, yellow and red sponges and with myriad fish life inside and outside the structure.

These atolls that lie to the north of the central atolls region and both regions can be dived together on central and northern atoll itineraries. They include Baa, Lhaviyani, Noonu and Raa Atoll. Baa Atoll is home to the famous Hanifaru Bay where mantas and whale sharks feast on plankton blooms from March to December. This area has a lot fewer liveaboards than the central atolls where some of the most populated sites in Maldives diving are. Coral coverage is great in some places, not so great in others, but everywhere seems to boast an impressive variety of fish and plenty of large schools.

These outer atolls to the far north are very sparingly visited by liveaboards, so you can really feel like you are getting away from it all. This area is so far from Male that a domestic seaplane is required for far north Maldives diving. There are some fantastic colourful reefs here boasting pristine hard and soft corals. Shark species include leopard sharks, whitetips and blacktips, plus manta rays, giant trevallies and more. The main atolls visited here are Haa Alifu atoll and Haa Dhaalu atoll. The seas in the far north are normally calm and warm, making it great for diving throughout the year except for the months of June and July.

These atolls lying just south of the central region include Laamu, Meemu, Thaa and Vaavu atolls. They are sometimes included on liveabard routes together with central atolls sites, and sometimes as a distinct region. Typically here you can expect to see a good number of sharks, rays, jacks and tuna on channel drift dives, swimthroughs, caves and caverns. Large schools of fish are guaranteed and sightings of whale sharks and hammerheads are also quite common. The Deep South Atolls such as Addu, Huvadhoo (Gaafu), and Foahmulah have some fantastic shark action including more rarely seen species like thresher sharks, tiger sharks and oceanic whitetips.

The best channels for diving in the Maldives with reef sharks are at - Lhaviyani, North and South Male, Vaavu, Meemu, Laamu and Gaafu (probably the best). Elsewhere the channels are too deep to dive. The best areas for whale shark encounters are Ari Atoll, and Gaafu and Thaa atolls in the south. For mantas, the best locations are Ari, Addu, North Male, Haa Alifu and Haa Daalu, and Baa Atoll. For hammerheads, plan a visit to Rasdhoo Atoll in North Ari, or Fotteyo Kandu at Vaavu Atoll. Thresher sharks and tiger sharks can be found at Foahmulah Island all year round.


How to Dive Maldives 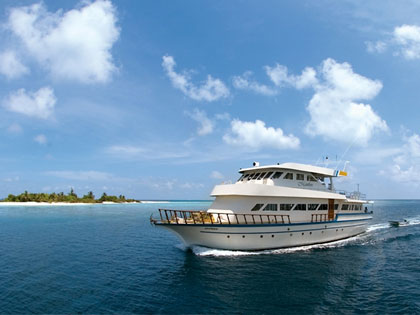 Some resorts have good dive sites nearby but if you wish for the greatest marine diversity and a variety of sites then liveaboard diving is king. For more information on the charter routes and all the other travel information you might need to visit Maldives, read: Central Atolls, Outer Atolls.

These cruise vacations are very popular and you need to plan ahead to make sure you get the trip you want. We recommend that you book at least 6 months in advance during the Maldives high season as many trips become fully booked prior to the departure date and last minute availability is almost unheard of.

As a general rule of thumb, the northern areas tend to have healthier reefs and better macro life, whilst the southern areas have more sharks. Since the islands are scattered over a large area, and the best diving is found inside and outside the atolls' lagoons and in the channels in between, the best way to see the region is by liveaboard.

The recommended months for confirmed liveaboard departures are from November to May but the Maldives scuba diving holiday season runs all year round. If you wish to come outside of November to May it may be more difficult to find a departure date that suits you.

The northeast monsoon (winds from the northeast) runs from the end of December to May. At this time of year the skies are blue and the lack of wind means the seas are calm. The visibility on the eastern side of the atolls is good at 20-30+m, and 15-20m on the western sides. The eastern atolls generally have the best visibility during this time too, and December to March normally enjoys the best overall visibility. This is because the currents flow through the atoll channels from east to west. Reef sharks gather in large numbers at the channel entrances on the eastern side of the atolls; whereas mantas are drawn to the western sides because plankton flows out of the channels into open sea on west at this time. The current is strongest at this time of year too.

June to November is the southwest monsoon and the above process is reversed: currents from through the channels in an easterly direction; mantas to the east, reef sharks and better visibility to the west. It is at this time when the skies are cloudier, the winds are stronger and seas a little rougher, although the season does still get nice, sunny spells. Surface swells can reach 1-2m, particularly during the rainy season in June/July, when rain falls on average 3-4 hours per day, and during the monsoon transitions in late May and early December.

Water temperature are fairly constant throughout the year at 26-29°C, except in the far south where the water temperature can drop to 24°C during the northeast monsoon. For more on the climate and sea temperatures in the Maldives, visit Climates To Travel

Having said all that, like most places in the world, the seasons in the Maldives have become less predictable in recent years.

Mantas, whale sharks, turtles, reef sharks and hammerhead sharks are found in the Maldives all year round; if anything, manta rays are found in even greater numbers in the southwest monsoon. As for the other big creatures, diver encounters are dependent on non-seasonal factors: whale sharks are more frequently sighted at high tide, and hammerhead sharks ascend to shallower water at sunrise.

The exception to this is at Hanifaru Bay, usually between May and December, when hundreds of manta rays and some whale sharks gather on the eastern side of Baa, where vast plankton fields accumulate. The area has been declared a marine reserve and current regulations permit snorkeling only for a maximum of 60 persons at a time.

Where are the Maldives and How Do I Get There?

Review our map below of the Maldive Islands and their location in the world. Here, you will find information on how to get to Maldives.

... [The sales person] did the whole booking correspondence with me. I was impressed by how quickly he always responded to my emails. That is definitely a strength if you get a quick reply ... -- Simone, Germany.  [More customer reviews]