Tiger sharks are among the most sought after, and feared of, sharks. The impressive sight of a muscular, striped tiger shark coming into view makes any dive more exciting. The excitement is heightened by their fearsome reputation as a potential ‘man-eater’. They are second only to great whites in attacking people.

Does it deserve this reputation as a creature to be dreaded? What else might this macro-predator eat, other than you? Where can I dive with this denizen of the deep? Read on for all you ever wanted to know about the tiger shark, but were too afraid to ask… 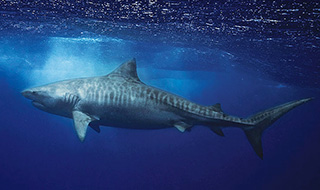 The most obvious feature is the presence of dark ‘tiger’ stripes down each side of the shark’s body. These are darker among juveniles and fade with age. Tiger sharks are capable of reaching up to 5 metres in length (typically 3-4.5m) and weigh in usually between 400 and 600 kg, but large females have been recorded at up to 900 kg.

Their bodies are bulkier looking than other more streamlined, ‘pointier’ sharks. Unlike other sharks the tiger has a wide, near terminal mouth, not set back far below the tip of its snout. Sharp sideways pointing teeth help it slice easily through flesh, bone and turtle shells. Their teeth are constantly replaced by new rows.

The tiger shark’s counter-shaded skin ranges from blue to light green above, to white or light yellow below, camouflaging it when viewed from above and below.

Tigers swim slowly and are well camouflaged against dark backgrounds. They are capable of sudden bursts of speed when they approach their prey. They visit shallow reefs, harbours and river-mouths; all places frequented by humans. This helps explain why they are second only to great whites for attacks upon humans. In fact, considering the amount of human-tiger shark interactions, the bite rate is very low.

So their fearsome reputation is perhaps undeserved. They have even been successfully handled by experienced shark divers at Tiger Beach, Grand Bahama, and Umkomaas, South Africa. As a diver you would still be well advised to treat them with caution and maintain eye contact when sharing the water with a tiger shark.

Electro-receptors called ampullae of Lorenzini detect electrical impulses helping them to locate prey. They also have a sensory organ called lateral line detecting minute vibrations in the water, allowing them to hunt in low light conditions. Like other sharks the tiger has a nictitating membrane, a clear eyelid that can cover the eye. It also has a reflective layer behind the retina allowing for some vision in low light conditions, where it thrives as a hunter. 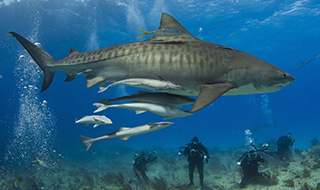 The tiger shark hunts alone, usually at night and close to land. Acute sensory organs, excellent vision and the ability to detect small traces of blood all assist this apex predator to locate its prey. They have a widest range of prey of all sharks. That long list includes: crustaceans, fish, seals, turtles, dolphins, dugongs, sea snakes, squid, sea birds, jellyfish, seals, sea lions, rays and other sharks, including other tigers.

A group was documented killing a struggling humpback whale. Dolphins and dugongs are known to vacate areas when tiger sharks show up. Turtles are easy prey and a favourite tiger shark food, and their populations, such as those at Cocos Island, decline dramatically upon the arrival of tigers. As a scavenger they are known to feast on dead whales and have been documented doing so alongside great whites.

Terrestrial mammals have also been recorded in the stomachs of tiger sharks including horses, goats, sheep, dogs, cats, brown rats and flying foxes. Less tasty stomach contents commonly found include license plates, tyres, oil cans and even condoms. They will swallow anything!

Mating occurs only once every 3 years. Using his teeth to hold the female stil,l the male inserts one of his claspers into the female cloaca. Often the bite hold causes nasty injuries. The tiger shark is unique in its family in that it is ovoviviparous. Its eggs hatch internally and the young are born live when their development is complete, usually after 16 months.

Each litter can be from 10 to 80 pups. They are between 51 to 90 cm. Immediately after birth the pups need to fend for themselves. Their lifespan is not definitively known but is estimated at normally between 12 and 50 years.

Tiger sharks do not have many predators but among them are other tiger sharks. They have also been documented being attacked and killed by groups of orcas.

Tiger sharks are nomadic and found mostly in tropical and subtropical waters all around the world. In the Pacific they are found as far north as Japan and as far south as New Zealand. Areas include: California, Hawaii, The Caribbean (especially the Bahamas), the Red Sea, The Gulf of Mexico, India, Australia, Indonesia, Fiji, South Africa and Cocos Island, Costa Rica.

They are known to stay closer to the equator in colder months but venture further north and south when the waters are warmer. They have been recorded as deep as 900m, and in very shallow coastal waters.

The tiger shark is considered a near-threatened species, according to the International Union for the Conservation of Nature. The infrequency of reproduction and short life span mean that intense fishing can have a devastating effect.

It is captured by humans for its fins, meat and liver, which is high in vitamin A and used in the production of vitamin oils. It is also caught for its skin and for ‘fun’ by big game fisherman.

To date, other than the protection they receive off Australian waters, there are no specific conservation measures in place for the tiger shark. There are several conservation organisations which are working to save our sharks worldwide. These include Sharklife

, The Shark Trust, Bite-Back, Save Our Seas Foundation and the Shark Research Institute.

There are many great destinations for diving in the presence of a tiger shark:

... Great service from Dive The World. Did their due diligence to help me find the best scuba diving shop at that time. They were great because I was late in finding openings on boats the week before the trip to Fiji. Followed up with me afterward to lock down a time and place and pickups, etc. ... -- Colin Zhu, USA.  [More customer reviews]