Is it a Napoleonfish or a Maori Wrasse?

An exquisitely patterned fish, the giant yet gentle Napoleon wrasse is a favourite fish to encounter for divers in many regions of the world. This is because, in areas where they are still not wary of humans, they seem to actively seek out tactile interaction, and have even been known to form bonds with individual scuba divers whom the wrasse recognise and seek out.

Most often they will approach divers, using their constantly roving eyes to follow and scrutinise their movements. Look into its eyes and you can not help but be struck by this fish's obvious intelligence and awareness. They seem to enjoy being stroked and will lean against the pressure of your hand. Sometimes it will even give a diver a gentle nudge or a brush, just like a dog acts when it wants to be petted. 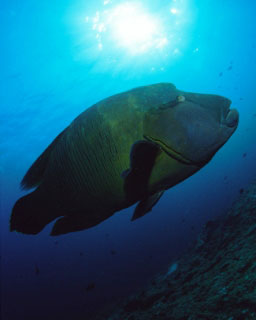 The Napoleonfish can instantly be recognized by its size, colour and shape. It is one of the largest reef fishes in the world and is the largest member of the wrasse family. They can grow up to 230 cm and weigh 190 kg. They have fleshy lips and a hump over the head that is similar to a Napoleon hat. The hump becomes more prominent with age.

Colours vary with age and sex. Males range from a bright electric blue to green, a or purplish blue. Mature males develop a black stripe along the sides, blue spots on their body scales, and blue scribbles on the head. Juveniles can be identified by their pale greenish colour and 2 black lines running behind the eye. Females, both old and young, are red-orange on the upper parts of their bodies and red-orange to white below.

Maori wrasse, like all other wrasses, have protrusible mouths, with separate jaw teeth that jut outward.

Humphead wrasse spend most of their time feeding during the day. Adults are usually solitary, spending the day roaming the reef and returning to particular caves or ledges to rest at night.

In some areas they are very inquisitive, but in others where they are hunted they are very shy. In the Red sea it is a very curious fish, where the fish have been fed with boiled eggs. Nowadays it is forbidden to feed Napoleon wrasse with eggs due to the high level of cholesterol that were found in dead specimens in the area.

Napoleon fish are carnivorous and eat during the day. They can be seen feasting on shellfish, other fish, sea stars, sea urchins and crabs, crushing the shells to get at the animal within. They also crush large chunks of dead coral rubble with peg-like teeth to feed on the burrowing mussels and worms.

Napoleon wrasse are one of the few predators of toxic animals such as sea hares, boxfish and crown-of-thorns starfish, and are therefore an important part of the marine food chain in maintaining a balanced and healthy coral reef.

Pairs spawn together as part of a larger mating group that may consist of over 100 individuals. The planktonic eggs are released into the water, and once the larvae have hatched they will settle out on the substrate. Adult females are able to change sex but the triggers for this development are not yet known.

Napoleon wrasses are extremely long-lived, known to survive for at least 30 years, and take around 5 to 7 years to reach sexual maturity, meaning they are extremely slow to increase populations.

With the exception of large sharks, there are few predators could tackle an adult Napoleon wrasse. As with most other marine creatures, humans are their biggest threat.

This species is found throughout the Indo-Pacific oceans, from the Red Sea and the coast of east Africa to the central Pacific, south from Japan to New Caledonia. It is very rare in South East Asia thanks to the Asian restaurant trade and illegal fishing, but is very common in the Red Sea and the Maldives due to park ranger control.

The Napoleon wrasse is mainly found on coral reef edges and drop-offs. Juveniles can be found among branching corals in shallow lagoons, while adults prefer the upper margins of clear lagoon pinnacles and steep coral reef slopes to a depth of at least 100 metres, but occasionally up to 160 metres deep.

They move into shallow bays during the day to feed, and tend to move into deeper waters as they grow older and larger. Adults therefore, are more common offshore than inshore.

Although the Napoleon wrasse has a widespread distribution, it has never been common in its range and recent reports have revealed a worrying decline in numbers. Its life cycle traits make this species extremely vulnerable to exploitation and the population can only endure light levels of fishing. Cyanide is typically used to catch this fish because live fish are difficult to take any other way. It is a practice that devastates coral reefs.

The fish is on the World Conservation Union (IUCN) 'Red List of Threatened Species', and is listed for protection on the Convention on International Trade in Endangered Species (CITES).

The IUCN Groupers & Wrasse Species Specialist Group is working to collect data on populations and to raise awareness of the issues involved with protecting this creature. Trade restrictions are particularly important as this species cannot be reared in captivity, and all the individuals that you see in restaurants and fish markets come from the wild.

Traditionally, the flesh of this fish has been highly prized, and more recently it has become one of the most highly sought species in the luxury food industry that has undergone an increase in popularity in many eastern Asian countries.

The Napoleon wrasse is most often seen forlornly swimming about in small aquariums in seafood restaurants in Hong Kong, where it can fetch up to US $100 per kilogram or up to US$ 400 for a set of lips. As their numbers dwindle the rarity of the species is likely to increase the price further.

There are many destinations for diving in the presence of these memorable creatures:


Dive The World Recommendations: the Maldives, Red Sea and Bunaken.

... Prompt professional service throughout. Vic at Dive The World ensured that all information was available to ensure that our travel arrangements were water tight. The website is clear, factual and easy to navigate. I will defiantly use Dive The World to book my next scuba adventure ... -- Alan Dickson, UK.  [More customer reviews]