Mysterious Denizens of the Deep

Diving with sharks is a popular pursuit but not all shark dives are the same. One of the most awe-inspiring sights has to be diving with the hammerhead shark. Often seen in huge schools, no-one could forget the vision of so many of these incredible looking creatures weaving their way slowly against the current. Learn more about scalloped hammerheads before you too are witness to this amazing sight ...

It is thought that the hammer is used for gathering data since the shark's head swings as it swims. Previous assumptions were that the shape of the head prevents 3 dimensional vision, however researchers from Florida Atlantic University, have dispelled this myth and claim that hammerheads have "human like vision" with excellent stereo vision and depth perception. They can also see above and below them at the same time, giving them a unique advantage as predators. The drawback is that they have a large blind spot directly in front of their heads. Whatever the pros and cons, the advantages of the hammer shape must outweigh the drawbacks, since these sharks are widespread and can be seen in huge schools particularly where deep sea meets islands and sea-mounts. 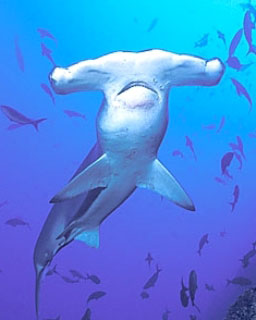 Averaging about 10 feet (3 metres) in length for mature adults, their name is derived from the notches or "scallops" that appear along the front edge of the hammer. These are missing on other hammerheads. Another typical characteristic is the free end tip of the second dorsal fin which nearly reaches the tail fin.

Where scuba divers find scalloped hammerhead sharks, they may also come across 9 other related species which can be distinguished quite easily by appearance, mostly on the basis of the difference in their hammers.

Great hammerheads are one of the largest flesh-eating fish in the world and can reach up to 7 metres in length. Its hammer lacks distinctive scallops on its T-shaped head which has 1 central notch. The smooth hammerhead, has a smooth edge to its flat head and a whitefin hammerhead shark, found only off the Ivory Coast, has white fins, believe it or not. Equally surprising is that the smalleye or golden hammerhead has small eyes and a golden hue on its body. The scalloped bonnethead hammerhead shark differs from the scalloped hammerhead most notably with its arc-shapped hammer.

Most often, scalloped hammerheads will be seen in large schools, sometimes numbering in the hundreds of individuals. They spend most of the day close to shore moving into deeper waters at night in the search for food.

Although the schooling has sexual reasons, it also operates as a means of protection, particularly for the younger sharks. They tend to be allocated the upper regions of the school, closest to the surface. Some species of hammerheads migrate during the warmer months of the year in the search for cooler water, particularly the shallow water sharks like the scalloped hammerhead. Great hammerheads on the other hand prefer to remain in deep waters.

Scalloped hammerheads have a very sophisticated navigation system, using the environment as a map.

Normally scalloped hammerheads pay little attention to divers and exhibit no aggression or changes in behaviour. Occasionally divers report some threat postures when approaching the sharks, such as arching of the back and sudden accelerated swimming.

When the feeding habits of the scalloped hammerhead shark are examined then the uses for its hammer begin to emerge. It is dotted with small electrical sensors called "the ampullae of Lorenzini" which, at close range, can detect the weak electrical fields generated by all animals. This helps greatly with feeding on fish such as sardines, herring and mackerels, occasionally also on invertebrates such as octopuses. Large scalloped hammerhead sharks also eat small-sized shark species such as the Atlantic sharpnose shark or the blacktip reef shark, they are also occasionally cannibalistic.

Incredibly, they also use this important sensory ability to detect magnetic fields underwater, both from the North and South Poles and those created by volcanic activity. The result of this is a type of 'highway' system on the ocean floor - a natural GPS, shark-style!

Generally speaking humans have nothing to fear from hammerheads although on rare occasions larger sharks have attacked people. While you shouldn't agitate any marine life, including sharks, it is some comfort to note that this shark's uncommonly small mouth is more suited to eating fishes than people! The great hammerhead shark is the only one that is considered at all dangerous to humans.

Mating is one of the reasons that these sharks form such enormous shoals. Females position themselves in the middle of the shoal since males know that, size being important to scalloped hammerhead sharks, the larger and more desirable females will be at the centre. Females outnumber males 6 to 1 so the organization of the shoal allows the males to find big healthy females in the centre of the shoal that can bear more young than the less robust females that keep to the shoal's fringes.

In the evening, amorous couples pair off as the shoals disperse and the mating begins. Tenderness is not really at the forefront of the males mind during the act. The male wraps himself around the female grasping hold of her with his teeth. The female sharks then bear these visible mementos of intimacy on their sides for years.

Pregnancy lasts between 8 and 10 months. Around the March to August period, female sharks travel to shallow, protected waters to give birth. Hammerheads are viviparous and the pups (normally between 12 and 50 of them) are born live, which is unusual for sharks most of whom lay eggs.

As with other sharks, parental care ends at the time of birth. However, young sharks enjoy safety in numbers, staying within a large school. Females grow more rapidly than males and therefore reach sexual maturity earlier. There is some evidence that this may be because males are found in much shallower sections of the school than females. Here they have access to less food, when growing, than the females.

Larger sharks will prey on a small or injured scalloped hammerhead shark, while there are no major predators of the adults of this species.

Hammerheads, particularly the scalloped variety, are found in all tropical and warm temperate seas, from coastal areas near continents to oceanic islands far offshore.

As a general rule single sightings tend to occur more frequently near to the shore whereas oceanic islands and sea-mounts are really where you want to be to experience a school in all their glory. Cocos Island off Costa Rica, the Galapagos Islands, Socorro in Mexico, Madivaru Corner in the Maldives, and the coast of Malaysian Borneo which features oceanic islands and deep water atolls such as Layang Layang, are among the best dive locations for sightings. Komodo is also an area where nutrient-rich deep sea upwellings mean big pelagics such as the hammerhead shark are regular visitors.

Without much natural predation in the oceans, the greatest threat to hammerhead sharks comes from the fishing lines and nets dangled from above. The schooling pattern makes them easy prey for fishermen targeting large catches.

The odious business of shark-finning to feed the destructive desire for shark fin soup in places like China and for the Chinese populations of countries such as Singapore, Taiwan and Malaysia, accounts for most commercially caught hammerheads. To see this beautiful creature's population totally decimated worldwide for nothing more than a superstitious belief is a very real and modern tragedy.

Scalloped hammerheads are listed on Annex I, Highly Migratory Species, of the UN Convention on the Law of the Sea. Although states are urged to cooperate over the management of this species, no such management yet exists. They are in danger of becoming extinct and are categorised as "endangered" on the IUCN Red List of Threatened Species. You can do your bit by finding out more and signing up to join the Stop Shark-finning Campaign at www.sharktrust.org.

... I was very pleased with the whole booking procedure, extra questions I needed answering and the correspondence with all the staff who helped me with my booking. I had no trouble or problems. You were all very polite ... -- Ling Luong, Hong Kong.  [More customer reviews]