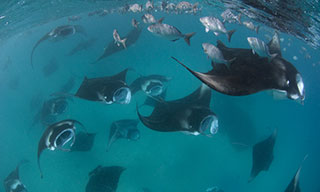 Hanifaru Bay in Baa Atoll, Northern Maldives, is famous for being a nursery ground for grey sharks, and sting rays. It is also one of the very few places in the world where whale sharks congregate to mate. However, it is best known for its concentration of the enigmatic, graceful, inquisitive and charismatic reef manta rays (Manta alfredi).

Hundreds of these large, graceful, cartilaginous elasmobranch fish congregate to gorge themselves in the plankton rich waters of the bay. Not surprisingly, another species flocks to Hanifaru to snorkel in its amazing bay - underwater photographers.

When time and tide align, fortunate snorkelers get to observe and capture a roiling, whirling feast. Generally manta feeding is akin to a coral-reef ballet. However, due to the confined space and sheer numbers, the status quo is all but forgotten. Their natural feeding patterns are replaced by feeding frenzy behaviour which results in a disorganised, bumper-car like performance.


What’s so special about Hanifaru Bay?

Hanifaru in Baa Atoll, is an uninhabited island of the Maldives with a small, enclosed, underwater bay approximately the size of a football field, locally known as ‘Vandhumaafaru Adi’.

Observing the manta feeding freezy in Hanifaru Bay is a spectacle to behold. Guy Stevens, a British marine biologist and director of the Manta Trust, shares his experiences, “Just after high tide you’ll see a few manta rays turn up, then poof, a whole group will move in, and you’ll get as many as 200 feeding for 2 to 4 hours in a bay no bigger than a soccer field”. This small area coupled with the rich plankton-filled soup has altered the natural feeding habits of these graceful creatures whose wingspan can reach up to 3.5m.

Mantas are usually observed feeding in a sedate, patterned behaviour which includes barrel rolling and swimming near the surface to funnel their microscopic meal via their cephalic lobes into their wide mouths which is filtered and the water is then passed back out through their gills. Tourists flock to this confined soup bowl, to observe mantas ‘cyclone feeding’. During mass feeding, of 50 or more mantas, the head of the line catches the tail and the chain spins into a vortex.

If the number increases to over 100 mantas they spiral out, the chain breaks down and chaos feeding ensues. These stately creatures are observed bumping into each other as the veritable feeding frenzy unfolds. There can be no doubt, witnessing this spectacle can be considered a once in a lifetime experience.

Between May and December each year, during the South West Monsoon, a lunar tide also occurs which results in a massive build up of plankton in the bay. This high concentration draws in hundreds of filter feeders and it is not unusual to see up to 200 manta rays accompanied by whale sharks.

The History and Management Efforts 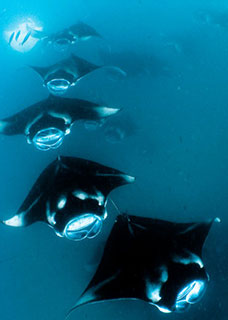 Nowadays Hanifaru Bay is considered to be the world's largest manta ray feeding station. For hundreds of years Hanifaru has been known to local fishermen who used to hunt the whale sharks that also frequent this site. More recently the site is frequented by scuba divers; the first dive operators ventured up into Baa Atoll in the mid 1990s. Such a spectacular site would not be kept secret for long and soon up to 14 boats were crammed into this small area on a daily basis in anticipation of spectacular filter feeder encounters.

In a dramatic turnaround in 2008, the Fisheries Ministry (which is empowered by the Fisheries Law to establish special sanctuaries), agreed to lease Hanifaru to a private party on a long term basis, to be developed for industrial purposes. Furthermore, the island was not put to tender, and no Strategic Environmental Impact Assessment (SEIA) was done, neither were any clauses included to ensure the lessee respects the wildlife in the contracted area. Bluepeace and other interested parties took action and successful protests put a stop to the industrial development on Hanifaru.

The Maldives is a party to the Biodiversity Convention, Cartagena Protocol on Biosafety and UNESCO Convention Concerning the Protection of the World Cultural and Natural Heritage. Under these treaties, the Maldives has obligations to ensure the conservation and protection of habitats and species in both national and international context.

Realising that the bay had turned into something of a circus and the situation would affect the sustainability of the area, a proactive stance was taken and the bay was declared a Marine Protected site in 2009 by the Maldives government, in recognition of its importance in the ecosystem. In 2011 it was also declared a core-protected area within the newly designated UNESCO World Biosphere Reserve that encompasses the entirety of Baa Atoll.

Limitations on Visitors and the Future

A limit was set at to a maximum of 5 boats and 80 divers or swimmers at any given time. Subsequently all scuba diving has been stopped in the bay and tourists have been confined to snorkeling only. It was touted in 2011 that the ‘last’ swim with whale sharks and mantas in Hanifaru Bay would be in 2012, however, the tourist dollar is just too strong and tours to visit the world famous bay to swim with whale sharks and mantas are still being sold today.

Divers can experience the spectacular scuba diving at the northern atoll dive sites of Baa Atoll which includes 2 protected marine sites, one being Hanifaru Bay (on the eastern side of Baa Atoll). Diving is now prohibited in the bay, however your snorkelling permit can be arranged by the liveaboard operator ahead of your trip to ensure that you will be one of the lucky few to witness this incredible spectacle between the months of May to December.

Several Maldives dive liveaboards feature Hanifaru in their schedules. Don’t delay, book now while you still have the opportunity to visit Hanifaru Bay, who knows what decisions will be taken in the future which may prevent further visits to this amazing bay?

... Always on-time, professional, dependable, courteous, helpful. Very reassuring to work with, especially when on a dive cruise vacation in a foreign country. I would recommend Dive The World to anyone. ... -- John Charney, USA.  [More customer reviews]