Your Guide to Diving in Cenderawasih Bay

The best known diving in the West Papua area is Raja Ampat, an archipelago surrounding the 4 main islands of Misool, Salawati, Batanta and Waigeo. However, there is much more to this remote area of Indonesia as liveaboard operators and adventurous scuba divers are beginning to discover.

As liveaboard routes venture further east, the underwater treasures of Cenderawasih Bay reveal a great diversity of diving and a real sense of the pioneer spirit - of going where few others dare. Cenderawasih's marine diversity has earned it the name "The Galapagos of Indonesia's reefs" by none other than Dr Gerald Allen. As an indicator of biodiversity, the bay has 4 species of turtle: green, hawksbill, Pacific ridley and leatherback, as well as much sought-after marine mammals such as dolphins and dugongs. A vast array of reef fish and a wide variety of dive sites are further reasons why this region is up and coming at high speed. 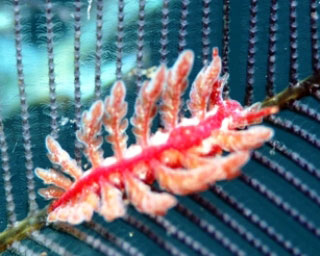 In Cenderawasih Bay the main drawcard is the presence of numerous whale sharks. Their behaviour here is unlike anything you may have seen elsewhere. Where whale sharks are normally seen on their own, mouths agape to filter feed on plankton, Cenderawasih Bay whale shark encounters are completely different. Here they gather together below fishing platforms, dining on the small fry that slip out of the fishing nets or are otherwise discarded by the fishermen.

Some of the photographic opportunities such behaviour offers to scuba divers are stunning. Imagine several whale sharks in your field of vision, from small juvenile to colossal mature adult, some hanging vertically in the water to access the fry near the surface. Spectacular!

It is not all about the marine megafauna in Papua Province and West Papua. There is no shortage of fascinating dive sites for those who prefer to nose around the substrate for the minute and marvellous. Cenderawasih also has its fair share of excellent macro with pygmies, tiger prawns, nudibranchs and sea snakes giving divers plenty of smaller stuff to marvel at.

Special mention should also be reserved for the World War II wrecks that Cenderawasih Bay also plays host to. The bay at Manokwari was a safe anchorage for the Japanese while allied forces held nearby Biak Island. So it is little wonder that many ships and planes met a watery fate. It is likely that many remain as yet undiscovered and several that have been are still rarely dived.

In conclusion, the Cenderawasih region is a remarkable dive destination for large animals, small animals, beautiful reefs bursting with life, and historical WWII wrecks. It is little wonder that such a reputation is making the area a must-visit destination for so many scuba divers.

There is quite a difference between being one of a few dozen snorkellers chasing after a single shark and being one of only a few lucky scuba divers surrounded by whale sharks near the surface in clear water as they feed from below the local fishing platforms. An incredible experience for divers of any experience level. The best action is often in early morning when, below the fishermen's 'bagans' (platforms) several whale sharks often gather for an easy meal, an all-you-can-eat breakfast. Apparently the fishermen considered their presence a good omen and began offering them baitfish which also helps to prevent them disturbing the nets of sardines.

The fact that they are not being fed solely to provide entertainment for divers goes some way to assuage any guilt about human interference in the natural food chain. The whale sharks are very much focussed on the delicious bounty that the humans on the surface provide but are also aware of humans sharing the water with them. They seem to swim around avoiding contact with the divers and sometimes seemingly enjoying their bubbles rippling against their bodies. Breakfast and a free massage!

If you talk to anyone who has been on a trip to Cenderwasih they will almost certainly confirm that the dives done here with whale sharks are unrivalled by anything else they have experienced. In terms of the number of whale sharks, their proximity to you, the clarity of the water and the length of time you have to marvel at them, it is difficult to imagine how the experience could be improved upon.

Near the town of Manokwari on Cenderawasih's west coastline, there are several World War II wrecks lying in various depths. Some of the wrecks can easily be dived within normal recreational limits, others are much deeper or in locations where conditions can make it tough for all but the most experienced wreck divers.
Show more

The Shinwa Maru is a 120m Japanese transport ship which sank off the coast of Marsinam Island. The name translates as 'friendly spirit' but there was not much friendly about the 2 large blast holes in the starboard side that consigned the Shinwa Maru to a future on its side at depths of between 16 and 34m.

The wreck is still in pretty good condition and has become at one with the ocean, being home to colonies of sponges and hard and soft corals colourfully masking its metal bulk. Although it is home to a variety of life including jacks, moray eels and nudibranchs, it is more noted for the cargo scattered around. Dishes, beer bottles, batteries, sake bottles and chopsticks are among the cargo you can check out.

There were 2 old-fashioned diving helmets which were great photographic subjects but someone decided they would look better on their mantelpiece and they have not been seen since.

Although most of the talk of Cenderawasih centres around the impressive whale shark dives and the World War II wrecks, you will also dive sites which focus neither on the big nor the historical. Sungei Omiand is one such location and it is more like something you would expect to find in Indonesia's Lembeh or Ambon, or Milne Bay in Papua New Guinea.
Show more

This is a muck site where you dive with your nose inches from the sea bed of black volcanic sand, poking in an around the rocks and clusters of coral, looking for the weird and wonderful. An eagle eye can be rewarded with sights such as pygmy seahorses, sea snakes (and snake eels), frogfish, tiger prawn, cuttlefish and various nudibranchs. You might also spot a blue-ringed octopus if you are lucky.

There are many such sites in Cenderawasih Bay, near to villages, although the rubbish that human settlements create can be rather off-putting, a problem common to many shallow sites throughout Indonesia. You might well be too busy marvelling at the amazing array of marine creatures scuttling over or burrowing in the back sand, to notice.


How to Dive Cenderawasih


At the time of writing, liveaboards are the only viable option we recommend to visit the dive sites of West Papua and Cenderawasih Bay.

Note that it is also possible to combine a visit to Cenderawasih with a visit to Raja Ampat on the same cruise. This would be ideal if you want to visit both of these world class diving destinations of West Papua but do not have the time for 2 separate safaris.

For more information on the charter routes and durations, and all the other travel information you might need to visit Indonesia, check out our Cenderawasih Bay liveaboard section.

Some Indonesian liveaboards visit Cenderawasih Bay from June to October. During the months of July to September, strong winds and rain can cause rough seas in the open areas of West Papua such as Raja Ampat. Liveaboards use this change in the weather to focus on more sheltered routes such as Cenderawasih. The famous whale sharks are present in the bay throughout the year.

The Papua provinces of Indonesia experience 2 wet seasons: - November/December and July/August, however, it might rain in Papua at any time, not only in rainy season. Water temperatures are relatively constant, varying from a low of around 27°C from May to October, up to a high of 30°C between November and April. For more on the climate and sea temperature in Biak, Cenderawasih, visit the Weather Atlas

Where is Cenderawasih and How Do I Get There?

Review our maps below of Indonesian Papua, showing the location of Cenderawasih Bay, and its host country Indonesia. Here, you will find information on how to get to Cenderawasih.

... I would have to say the best part of the Dive The World service was the options of packages that were presented when trying to select where to go, it allowed us to get the best bang for our bucks ... -- Hugh Rowand, Australia.  [More customer reviews]