Wisdom of a Cephalopod

It is normally a case of love at first sight. There you are gently gliding over the reef when you see before you a blob that is hovering atop the corals. As you get closer you begin to distinguish the rhythmic wafting of its frills, its pulsating skin and intelligent eyes. Unlike most of the relatively simple marine life you are likely to encounter, here you are watching something with seemingly as much curiosity as it has in watching you - a cuttlefish.

Common throughout the Indo-Pacific region, Europe, Africa and beyond, the cuttlefish is a mollusc from the class of cephalopods, a cousin of the octopus and not a fish at all. It is a fascinating creature that can swim at great speeds over short distances, camouflage itself instantly, confuse its predators with a blast of foul ink and enrapture its prey with an incredible display of visual hypnotism.

Invertebrates make up 95% of all animals and cephalopods are widely believed to be the most intelligent of the world's invertebrates. Experiments show that cuttlefish have swift learning curves with many scientists being of the opinion that they can learn by observation. 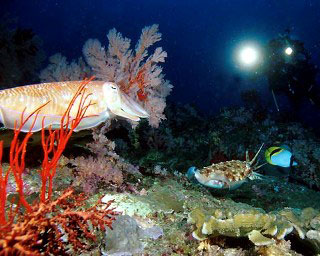 This creature is so named because they have a bone in the middle of their bodies, known as a 'cuttlebone', filled with gas, which is used as a buoyancy control device. Averaging about 30 cm in length (giant cuttlefish can grow up to 100 cm), they have 8 arms and 2 prehensile (capable of grasping) tentacles around their parrot-like beak.

Like the octopus, cuttlefish have chromatophores on their skin which they can change instantaneously both in colour and texture making them among the best camouflage experts in the animal kingdom.

Their eyes are remarkably similar in construction to human eyes and there is an unmistakable feeling that you are dealing with a creature of intelligence when you find yourself in a staring contest with a cuttlefish. Why they have W-shaped pupils remains a mystery, but some experts believe it allows them to see backward and forward at the same time.

The cuttlefish is a bottom-dweller which often lies in ambush for smaller animals such as crabs, shrimp, fish and small molluscs. Stealthily a cuttlefish will sneak up on its prey. Often this gradual movement is accompanied by a light show over its skin where bands of colour pulsate along its body causing its prey to freeze, seemingly entranced. Then it splays its 8 arms wide and fires out 2 long white feeding tentacles that grab the prey and pull it back into the crushing beak. It is such a dramatic attack that fascinated scuba divers often witness and then chatter about it endlessly after their dive.

Mating pairs align their bodies head to head so the male can transfer a sealed package of sperm into a pouch beneath the female's mouth. The female then scurries off to a quiet place where she draws eggs from her cavity and passes them over the sperm, thereby fertilising them. In the event of there being multiple sperm deposits, it is the one at the back of the queue, i.e. the last to deposit, who wins the day.

The eggs are often then distributed in clutches coated with sepia both to act as an adhesive force and also possibly to camouflage them with their surroundings. Cuttlefish can lay around 200 eggs in clutches often nearby those of other females. After between 2 and 4 months the young hatch as tiny versions of their parents with a supply of yolk that nourishes them until their first kill.

Unlike their squid and octopus cousins, baby cuttlefish are already highly developed and independent straight from hatching. They immediately begin trying to track down small crustaceans and instinctively employ all their natural predatory armoury.

Despite their incredible range of mechanisms for both defence and attack and their obvious intelligence, cuttlefish do not live for a very long time. They live for somewhere between 18 and 24 months and the females die shortly after spawning.

Their main predators are sharks, fish and other cuttle-fish. Dolphins also attack these cephalopods but strangely eat only the heads. Their first form of defence would likely be to try to evade being spotted by predators by employing their remarkable camouflage which can make them look like coral, rock or sea bed in the blink of an eye. Similar to its other cousin the squid, a cuttlefish can squirt ink into the water, enveloping its would-be predator in a disorientating cloud of foul tasting blackness.

They are widely distributed according to species. For example the European common cuttlefish is found all along the eastern Atlantic from Scandinavia to South Africa and the Mediterranean. Most other species, such as the flamboyant cuttlefish, are found in Asian waters and in Australasia. They are not found in American waters.

Generally speaking these molluscs are not high on the lists of endangered species and there is not a great deal of data on their population numbers. However commercial fishermen in South Australia catch up to 71 tonnes during the mating season both for human consumption and use as bait. Because of their short life span and spawning only once in a lifetime, the threats of over-fishing are obvious. Currently there are no management restrictions in place to limit the numbers that can be taken but there is pressure to add the giant cuttlefish to the endangered species list.

There are many great destinations for diving in the presence of these fascinating creatures:


Dive The World Recommendations: Burma, Lembeh Strait and Bunaken Island in Indonesia, and Lankayan in Malaysia.

... The added value of Dive The World is the quick response time to any queries and the good advice provided. The most important aspect is the peace-of-mind which comes with being able to trust Dive The World to make all the arrangements ... -- Mathias Eick, Germany.  [More customer reviews]