Open any coffee table book of underwater photography and you are almost certain to see a few pages dedicated to the majestic frogfish. One of the critter kings, anglerfish are often photographed for a number of reasons - their various contrasting colours, textures and camouflages, their incredible hunting tactics and of course their down-turned mouths and muppet-like faces. Of course, the fact that they remain absolutely motionless for 90% of the time also helps the happy-snappers.

Few creatures are more fun to spot underwater, usually perched in a squat position in or on a sponge whose texture and colour is identically matched by this stealthy angler; 2 diamond-studded eyes keeping watch for the next victim of its lethal, split-second gulp.

There are any number of reasons why frogfish, in all their shapes and sizes, fascinate and entertain human visitors to their watery domain ... 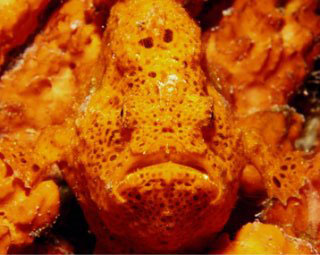 Frogfish, so named due to their squat resemblance to the common amphibians, range in size from around 5cm to the giant frogfish's colossal 40cm. They also resemble frogs in that their fins are more like legs, which they use to walk slowly over the sea bed and atop sponges and corals to lie in wait for their prey.

Colour is often not much help in identifying different frogfish since some have many different colours to allow them to camouflage themselves within their environment. Depending on the species, this colour change might take seconds or weeks. Some frog fish's skin is also adorned by bumps, flaps, hairs and tassles which further allow for mimicking the nearby seabed, corals, sponges or weeds. This also explains how divers can often cruise straight past, oblivious to their presence.

There are not many other fish that you might mistake for a frogfish but it can be exceptionally difficult to distinguish between the sexes or species. Short of getting out your scalpel, there is no way to tell male from female. Since colouration is a useless method of identification for all but the most rare species, you should be looking out for species-specific features such as what form the lure takes (mimicking perhaps a worm or fish), the number of eye spots and the number of spines.

It is the feeding approach of anglerfish that makes it such interesting creatures. Perfectly camouflaged, it lies in wait for its prey. The lure may be used to attract prey in a variety of different ways, depending on the species. They also employ a chemical attractant so sometimes they just lie in wait for some unfortunate to venture too close. When the prey is within grasp the blitzkrieg attack takes place. The frogfish expands its oral cavity engulfing the prey with a reflex that instantly sucks it in by creating suction pressure inside the mouth. Taking no more than around 6/1,000 of a second, it is the fastest 'gape and suck' of any fish. Frogfish have also been seen stalking their prey by sneaking towards their target along the sea bed.

They eat mostly small fish but also shrimps and crabs, with their prey sometimes being up to twice their own body size. Being toothless the frogfish swallows its prey whole, allowing digestive juices to do the rest. The prey can often be seen twitching and writhing against the walls of the its stomach in the throes of death.

Not a great deal is known about the reproduction of frogfish and in the wild it is a very rare sight to witness. During the process the female will fill up with so many eggs (up to 180,000) that her body becomes enormously distended and buoyant. The male will nudge the female's abdomen as they make their way to the surface where spawning takes place.

Some species jealously guard their eggs, while for others parental duties end with mating; the thousands of eggs being released as a drifting egg raft. After up to 2 months the eggs hatch into juveniles, which are smaller versions of adults but some show special defensive colours.

There is very little empirical data about the life cycle of a frogfish. Most of the available data on marine animals comes from fisheries - not a place where many anglerfish are to be found. It is difficult to imagine that they live beyond a few years. Certainly their life span in captivity is only a matter of a few years. In the wild, with the uncertainties of food sources and parasites, it is unlikely to be much longer.

Frogfish do not have any lightning responses other than for feeding because they have very little to fear in the way of predation. What eats anglerfish? Other frogfish. The gulper may become the gulped. However considering that they are designed more to catch fish swimming in the water column, this is a rather rare phenomenon. Moray eels have also been witnessed eating frogfish, but again, this is an uncommon sight.

It is possible that other opportunistic predators would devour anglerfish, particularly when they are still young. Indeed in some cultures, man would happily lift some floating sargassum and take the sheltering frogfish home to be eaten.

More often than not, however, the anglerfish are the hunter, not the hunted.

Frogfish are found throughout tropical and subtropical waters. Most species live in relatively shallow waters although some species are deep dwelling. Recreational divers in Asia are most likely to spot certain species including giant, clown and painted frogfish.

Estimates of numbers of frog fish are difficult to obtain but they are not believed to have suffered a significant drop in numbers in recent times. Aside from the obvious habitat destruction there seems to be little danger posed by man. Perhaps the greatest of the frogfish's human irritants is the constant flashing of photographic strobes, such is the love underwater cameramen have for these fascinating fish.

There are many great destinations for diving in the presence of these fascinating creatures. Frogfish are common in the dive destinations of Indonesia, Malaysia and Burma, with some of the best being:


Dive The World Recommendations: Sulawesi (Lembeh Strait and Bangka Island) in Indonesia, and the Mabul - Kapalai region of Malaysia.

... Thanks once again for another great trip booked with the assistance of Dive The World. I didn't see everything I had hoped to see, but still a great trip. Dive The World was very responsive to all questions and requests. Also able to assist changing itineraries at the last minute ... -- David Probert, USA.  [More customer reviews]