Misunderstood Terrors of the Oceans

No creature on earth evokes the same response in people as the great white shark: fear, reverence and awe. Our perception of this misunderstood species has been tainted by their media portrayal as monsters. The film Jaws, although it inspired many to learn about the species, didn't do the great white any favours among the general public. Human fear of the deep and of ‘man-eaters' remains very strong.

Thankfully the notion of these elusive predators as indiscriminate "killing machines" is beginning to change due to the accumulation of research. Many shark attack incidents can be attributed to them ‘sample feeding'; bites are not intended as an attack, and once the shark determines that the victim is not its preferred prey, generally they move on. Some courageous explorers have free-dived with great white sharks, and such bold experiments have shown that these majestic, yet intimidating, creatures are actually not predators of man.

So what do we know about these great sharks? ... 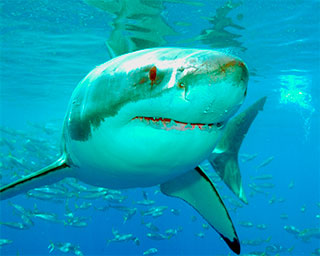 Great whites are the largest predatory fish in our oceans. They belong to the Lamnidae family which includes the mako and salmon sharks. They are also known as white pointers and white sharks. The females are larger than the males. Their average size is between 3.8 to 5m long and weigh approximately 2,300 kg. The largest on record was 7m long and weighed a whopping 3,200 kg!

The great white shark has a torpedo-shaped body, blue/grey on top and has a white underbelly. Their skeletons are made of cartilage, a tissue more flexible and lighter than bone. They have a pointed snout and a fearsome looking mouth that contains up to 7 rows of teeth, numbering 3,000 at any one time (when a tooth is lost, it is replaced from the row behind). 5 gill slits are positioned in front of each pectoral fin. It has 3 smaller fins (the pelvic fin, the second dorsal fin and the anal fin; males have claspers). The larger dorsal fin and the caudal fin (upper part of the crescent shaped tail) are visible when the shark is near the surface; it is a streamlined swimmer, reaching speeds of up to 24 km/h.

Great whites swim in a stiff-bodied, tuna-like fashion, unlike the sinuous whole-bodied swimming strokes of most sharks. Both hammerheads and great whites rely on ram-ventilation – that is, their forward swimming to push oxygen-bearing water through their mouths and over their gills – this begs the question: do they sleep at all? The 'Central Pattern Generator' that co-ordinates swimming movements in sharks is not located in the brain, but in the spinal cord. Thus it is possible for an unconscious shark to swim. Scientists even consider the possibility that the sharks' fore, mid and hind brain shut down in sequence, resulting in the marine equivalent of sleep walking.

They are one of a few shark species that engage in 'spy-hopping'. A behaviour which is characterized by the shark regularly lifting its head above the water's surface to 'look around'. It is theorised that they partake in this behavior as they can smell better when they are out of the water. An unusual characteristic of the great white shark is the ability to maintain parts of their body (swimming muscles, stomach and brain) at temperatures above that of the surrounding water, which classifies them as endothermic or warm-blooded, like mammals.

Great whites have 6 highly refined senses: smell, hearing, touch, taste, sight and electromagnetism. These highly refined senses make them superb hunters. Their hunting modus operandi is to strike from below. Their colouring and incredible speed are well suited to this hunting style. They search for their prey at the surface of the ocean while swimming below.

Once they have their prey in their line of sight, they use a burst of speed to ram it whilst simultaneously biting. Their multi-rowed, triangular, sharp serrated teeth can result in a single bite being fatal. Despite being on the top of the food chain, great whites often receive injuries from their prey; many have been observed with deep scaring on the head from the teeth and claws of elephant seals and sea lions.

These sharks are an important component of oceanic eco systems. They keep the oceans clean by eating carrion such as deceased whales. Up to 8 sharks have been observed whilst feeding on a single carcass. They did not display any aggression, despite often bumping into each other. They did, however, display a social hierarchy, with the largest sharks getting the choicest blubbery parts of the whale. The smaller members lingered back and grabbed pieces of drifting blubber. They are more frequently filmed breaching the surface whilst eating turtles and marine mammals such as sea lions, seals, dolphins and small whales.

Males mature at 26 years of age and females take 33 years to reach sexual maturity. Great white mating is a secretive affair. The gestational period has yet to be confirmed, but is thought to be 12 month and that females take a year 'off' before mating again.

Development of the pups is ovoviviparous. Meaning that eggs are retained within the body of the female in a brood chamber where the embryo develops, receiving nourishment from a yolk sac. This is the method of reproduction for 'live-bearing' fishes where pups hatch from egg capsules inside the female's uterus and are born soon afterwards. Litter sizes vary between 2 to 10 pups and they are approximately 1-1.5m long at birth.

Despite being the apex predator, baby great whites start their life in peril. As soon as they are born, they swim away from their mother as they are merely viewed as another meal to her. Many pups do not survive their first year. They are prey for larger sharks and orcas. Juveniles look and act like mini adult versions and instinctively hunt fish and rays to survive, they remain relatively close to the coastline where they are caught in safety nets that protect swimming beaches. Once they reach approximately 450 kg they begin hunting marine mammals. Great white sharks can get quite 'long in the tooth', living up to 70 years.

They sit at the top of the food chain and have few threats in the ocean, only orcas and larger sharks pose a risk; the only other risk to these creatures is human interaction.

Great whites are widely distributed in oceans that have a water temperature between 12 and 24°C. One of the densest known populations is found around Dyer Island, South Africa, where the majority of shark research is done. They frequent this area because of its resident seal population. There is also a high concentration in Mexico, Australia, California, Japan, Oceania, the Mediterranean and South America.

Traditionally they were considered a coastal species, however they have been recorded at depths of up to 1200m. A great white was tagged off the coast of South Africa and was tracked while it swam to Australia and back within a year! Research is making scientists re-think their traditional migratory theories of this magnificent species.

Unfortunately, the top predator, man, actively seeks them out for sport fishing as well as to sell their jaws and fins for large sums of money. A great white shark carcass on the black market can fetch over $20,000, an amount that provides enormous incentive for illegal fishing. Shark numbers are also depleted due to 'by-catch' - a term which refers to any species which are caught accidentally while fishing for other 'target' species. The daily catch of sharks world-wide is estimated at 27,300 animals, the threat to this species is real and ominous. Research has shown that massive depletion of sharks has cascading effects throughout the oceans' ecosystems.

Their long lifespan makes this species far more vulnerable than other species to pressures such as overfishing and environmental change due to their late maturity, low reproductive rate and slow growth. Their ancestry dates back more than 400 million years (older than the dinosaurs) - it could be said that they are one of evolution's greatest success stories, yet in less than a 100 years their numbers have been depleted to a couple of thousand individuals.

The great white is listed as 'vulnerable' by the IUCN Red List and is on the cusp of being labeled endangered due to overfishing. Their population is estimated at 3,000–5,000, which is considered by many as an over estimation. Great white sharks are a global species and saving them will take a global effort. South Africa, Namibia, New Zealand, Israel and Malta have fully protected white sharks in their national waters. How can we help conserve this magnificent species?

Dive The World supports the South African conservation group Sharklife; we make annual charitable contributions, and you can too by joining as a member

When booking a shark cage diving expedition, ensure that it is with a reputable operator who is associated with a shark conservation initiative and that your booking will benefit the organization. The shark cage diving operators promoted by Dive The World have strong ties to conservation initiatives. MV Sea Escape and MV Southern Sport operating in Mexico (Socorro and Guadalupe Island) are partnered with Fins Attached

It is vitally important that we all do what we can to ensure that these creatures are seen as a valuable resource globally, worth many times more alive than dead.

A unique destination to observe great white sharks is Guadalupe Island (located 350 km from Ensenada, Baja California, Mexico). Guadalupe is considered to be the world's best location for viewing, photography and video of these sharks. The visibility is approximately 30m and water temperatures are 18-22 degrees. The seasonal population of 140 sharks can be observed between August and November each year.

Rodney Fox, a great white attack survivor, and his team in South Australia have made significant contributions to understanding white sharks and share their knowledge through documentaries and ecotourism adventure trips. Fox pioneered great white shark cage diving here over 30 years ago; he was the first to design and build an underwater shark observation cage providing sports divers a unique experience to observe these intelligent specimens in their natural environment. You can benefit from their years of experience as well as knowledge of individual sharks when you book a trip on their liveaboard, the Rodney Fox. Non-divers participate in surface 'cage dives' and certified divers can enjoy the thrill of ocean floor cage dives.

... Using Dive The World was great. Easy to search the site and look at different options for a particular location. Details on the boats and itineraries were pretty good. Booking was easy enough... Pip was super helpful in confirming details and getting the trip booked. The best part was the response to e-mails, from initial enquiry to booking confirmations and follow up ... -- Susan Wilson, UAE.  [More customer reviews]