The largest monitor lizard in the world, the Komodo dragon was unknown in the west until 1910, when local stories reached the ears of the Dutch colonialists about a "land crocodile". A couple of years later, a paper was published that identified it as a monitor lizard, and it was given the scientific name Varanus komodoensis. The Dutch and local rulers quickly realised that the species was rare, and protection plans were made in 1915. A recent estimate puts the number of individuals at between 4-5,000 - rare indeed.

Naturally, the Komodo dragon is not something you will see cruising the reefs (although they can and do swim). But you will get the chance to see these land-bound giant reptiles during Komodo liveaboard trips. All dive cruises in the area will include a land excursion in the Komodo National Park for guests to see these prehistoric giants, known locally in Indonesia by the name 'Ora'.

Park rangers lead visitors on guided walks to view the dragons in their natural environment. It's an easy walk with some great views and you may also see other wildlife such as wild pigs, deer and birds. 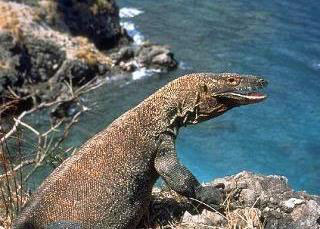 Their ancestors date back over 100 million years.

Komodo dragons are very big indeed. In Asia one gets used to seeing small lizards sunning themselves and geckos racing around the ceiling trying to catch a tasty insect. In some places you also see monitor lizards which can be up to half a metre in length, but the dragon is the king. The average male adult is about 2.5 metres in length and weighs in at around 50 - 70 kilograms. The largest ever recorded Komodo dragon was well over 3 metres long and weighed 166 kg! The huge variation in weight may be due to the fact that these creatures can eat up to 80% of their own body weight in a single meal. They walk on bowed legs, sliding their tails back and forth to help with balance.

Just like other lizards, dragons are covered in rough scales which resemble armour. These scales are connected to nerves which help in their sensation of touch. Juveniles have multi-coloured hues of yellow, green, brown and grey; with a speckled skin. These colourings provide camouflage during their early life which they spend living in trees. Adult colours vary from earthen brown to dark grey and black, the older and more mature they are, the darker the colour.

Komodo dragons have large sharp claws for holding onto prey and digging burrows. Their sense of smell is very pronounced allowing them to smell carrion up to an amazing several kilometres away. Like other lizards, they use their tongue to both smell and taste their prey and have a forked tongue, which is necessary for chemoreception. Their sight and hearing however are not so acute.

They have around 60 frequently-replaced, razor-sharp serrated teeth which are specially designed for tearing and slicing meat, much like sharks teeth. They have very strong maxillary bones and a flexible skull which allows them to swallow large pieces of meat that would otherwise be too big.

The Komodo dragon is usually a solitary animal except during the mating season but they can and do form groups for hunting and feeding. Despite their bulky size they are agile and can easily climb trees. They can move quickly and run at a speed of up to 20 kilometres per hour. They are also good swimmers and have been known to swim from one island to another within the Komodo National Park. They may swim to another island to hunt prey or find a mate.

Being cold-blooded, these lizards use burrows to keep warm during the night. When dawn breaks they drag themselves out of bed and laze on the open earth in the baking sun, as if recharging their batteries. Being reptilian they are more active during the afternoon, after they have warmed themselves up.

The Komodo dragon is powerful and agile, but surprise is still the method of choice for capturing larger prey. It will eat almost anything from its own eggs and those of turtles, to pretty much any animal within its domain, including deer, buffalo, boar, snakes, you name it, even wild horses and monkeys. Despite this variety, human attacks are rare and usually due to "getting in the way" rather than the dragon's attempt to feed. Locals give them the care and respect that such a powerful animal deserves, but do not fear them.

The tall grass on the islands provides good cover for dragons, and most attacks occur from ambush when prey passes within strike range. A small adult Komodo, weighing 40 kilograms can kill a much larger Sunda deer at around 90 kilograms. By striking quickly and knocking the deer off its feet, the Komodo dragon begins tearing it to pieces using its claws and large, serrated teeth. Animals that survive this attack are quite likely to die from infection, as the lizard's saliva is particularly nasty, containing as many as 50 strains of bacteria. This bacteria causes blood poisoning that can kill an animal in about 3 hours.

For smaller prey, dragons may just strike directly for the neck and kill their victims instantly. They will also eat carrion - they have an amazing sense of smell, and can detect carrion from several kilometres. They have strong stomach acid to digest raw and rotting meat.

There are at least 3 males for every female in the wild so it can be difficult for a dragon to find a mate. However, Komodo dragons have been known to be monogamous and form long-term pair bonds which is a rare behaviour for lizards.

Mating takes place from May to August and during this period males may fight for a female and territory. Dragon males fight on their hind legs and try to pin their opponent down. The winner then flicks his tongue at the female and scratches her across her back with his claws. The female resists during the early phase or courtship but when she eventually submits copulation takes place and lasts about 12 minutes. The male inserts one of his hemipenes, the paired copulatory organs of lizards, into the female's cloaca - the posterior opening that hides her intestinal, reproductive and urinary tracts.

Females generally lay their eggs in September. The nest site is usually a sandy area where she can dig a hole. She will lay around 20 eggs, in a pile called a 'clutch'. Once a female lays her eggs, her parental duty is over and she rarely comes back to check on them.

Recent research has shown that female Komodo dragons can lay fertilised eggs without having any sexual relation with a male. This rare form of asexual reproduction is called 'Parthenogenesis'. In every case the off-spring are males. This reproductive adaptation may occur to allow a single female that lives in an isolated environment, (such as an island) to establish a sexually reproducing population as reproduction with her parthenogenesis-produced male offspring can result in both male and female young.

Dragon eggs are rubbery and tough and expand as the baby lizard inside grows. Often they are 50% bigger when the baby hatches than when they were laid. It takes about 8 months for the baby dragon in the egg to develop so hatching occurs in April. The baby hatches out by using a special sharp tooth called an egg tooth which falls out as soon as the lizard breaks free.

Young Komodo dragons spend their first few years of life in trees, hiding from their only predator; cannibalistic adults. It has been estimated that as much as 10% of an adults diet is made up of juvenile dragons. When a young dragon must hunt prey, it will roll around in faecal matter or in the intestines of eviscerated animals to deter hungry adults.

A Komodo dragon takes about 3 to 5 years to mature, and reaches sexual maturity at 8 or 9 years. They typically live for 30 years but can live for up to 50 years.

Most dragons dwell on the Indonesian islands of Komodo, Flores and Rinca, with a few on Gili Motang and Gili Dasami. They live in hot dry grasslands near areas of volcanic activity where there are high temperatures and little water available throughout the year.

Within the Komodo National Park, the population is reasonably well monitored. It is quite clear however that numbers around human habitation are falling.

Dragons have no natural enemies and are tertiary predators, i.e. at the top of the food chain. The greatest threats they face are from other dragons - they are cannibalistic - and from human beings through forest clearing and loss of habitat.

This is a vulnerable species and it is found on the IUCN red List. There are only approximately 4,000 to 5,000 Komodo dragons now living in the wild.

Numbers have dwindled due to habitat destruction from increased human population, volcano activity and fire. The Komodo National Park was established in 1980 to protect both the dragon and its habitat on several islands including Komodo and Rinca. Later, the Wae Wuul and Wolo Tado Reserves were opened on Flores to aid with their conservation.

Komodo dragons are one of nature's giants, one of the leftovers from the era of the dinosaurs. We've all heard of them, but due to their limited distribution and numbers, not many people get to see them. By joining a liveaboard cruise to Komodo, you not only get great diving, but have the chance to see a living fossil, one of the world's most famous and unique animals. You will also be directly contributing to their future protection through payment of the national park entrance fees.

Where to find them?

... The best part of the service was the speedy and friendly responses that I received via e-mail. It was something that was important to us when choosing someone to book our trip and one of the reasons that we chose Dive The World. Thank you again for the great service and we will surely be booking with Dive The World again! ... -- Karen Roden, Canada.  [More customer reviews]