Can this Shark Change its Spots?

The leopard shark is a fantastic animal to encounter on a dive. Its grace and beauty in motion provides an exhilarating experience. They are docile sharks that you can admire and photograph safely in close proximity, as they are often seen resting on the sea bed and are easy to approach.

They are not aggressive and are harmless to divers if they are not disturbed. By using a couple of simple diving techniques, you can extend your fun without spoiling the fun for other divers and the leopard shark too: 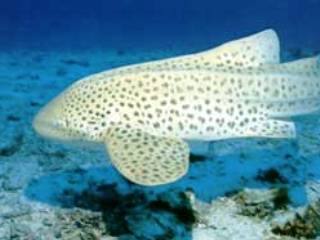 The only member of the Stegostomatidae family, stegostoma fasciatum should not be confused with Triakis semifasciata, whose common name is also the leopard shark. This benthic shark inhabits the temperate Eastern Pacific coastal waters of North America from Oregon, USA to Baja California, Mexico.

Leopard sharks can grow to a maximum length of 235 cm and, like their African namesakes, are sandy coloured with black spots. They belong to the order of carpet sharks and are easily recognisable; the most striking feature is an elongated caudal (tail) fin, almost as long as their entire body, with a deep sub-terminal notch.

The Leopard shark has a cylindrical body with a flat belly, large rounded pectoral (side) fins, and 2 close-set, long, low and spineless dorsal (back) fins. It is a slow-moving species that has 5 small gill slits (slits 4 and 5 overlap) and 2 distinctive ridges running down the upper sides of the body from head to tail.

The shark's snout or nose is large and rounded, with small barbels (whiskers). The barbels hang from the nostrils, close to the front of the snout, and they help the shark to sniff out prey. Its mouth is small and transverse, located in front of the eyes. It has nasoral grooves connecting the mouth with the nostrils. The eyes are tiny and located on the sides of the head. Its spiracle holes, which bring water to the gills, are located directly behind their eyes.

Often leopard sharks will be seen accompanied by suckerfish near the mouths or on the noses, picking off dead skin and parasites. This fish is called a Remora.

The leopard shark is a loner, has a docile nature and is generally considered harmless to divers and snorkellers; however, it may bite if provoked.

Leopard sharks are strictly nocturnal. They are rather sluggish during the day and disposed to what appears to be nearly continuous slumber in sheltered areas, often seen lying on sandy bottoms. By night they become active and can be found slowly foraging on the reef.

This shark is able to actively pump water over its gills, which means it does not need to swim to be able to breath, unlike many other shark species. This means that during the day, leopard sharks can usually be spotted resting on the ocean floor around coral reefs; they sit with their mouths open facing the current. It is believes that this behaviour helps the shark breath while resting.

The leopard shark diet consists of gastropod snails and bi-valve molluscs, sea snakes and crustaceans, such as crabs and shrimps. On occasion they also eat small bony fish.

It feeds at night, squirming through narrow reef cracks and crevices in search of prey, which it sucks into its mouth. It has small but powerful jaws, and teeth designed for crushing and holding, not particularly for cutting.

Like all male sharks, male leopard sharks have a pair of tube-like organs called claspers, along the inner part of their pelvic fins. The claspers are inserted into the female's reproductive tract during intercourse. These exchanges often involve lots of biting, and it's common to see females carrying flesh wounds after a passionate session. 4 years old, or 1.7 metres, is the minimum breeding age for the sharks.

Leopard sharks are oviparous, meaning the young pups develop outside the mother's body, inside thin leathery egg cases. During January to February the pregnant female lays up to 4 purple/black 17 cm long egg cases on the reef. These cases have tufts of hair-like fibres that help them anchor to the sea bottom so that they don't float away.

Each pup receives food inside the egg case from a yolk sac. After the shark pups fully develop at a size around 20-26 cm, and after around 170 days incubation, they hatch from their egg cases.

The first thing that you'll notice about a 25 cm leopard shark is that it looks nothing like its adult version. Juveniles are dark brown to purplish or black, with white or pale yellow bars and blotches; hence their alternative name of 'Zebra Sharks'. It is currently thought that juvenile leopard sharks form loose aggregations in shallow coastal waters for protection.

Their bold striped coloration will change and the banding will fade as it ages and grows to between 50-90 cm. Sharks over 90cm sport their leopard livery and live further offshore in deeper waters. They reach maturity once they grow to 1.7 metres and reach 4 years old

With the exception of some other large sharks, few predators could tackle an adult leopard shark. As with other sharks, humans are their biggest threat.

This is an Indo-Western Pacific shark. They are found to the west in South Africa and the Red Sea, across the Andaman Sea in Thailand and Burma, South East Asia in Malaysia, Indonesia, Vietnam and the Philippines, Australia to the south, Japan and China to the north, and Palau, Tonga and Fiji to the east.

The leopard shark is a bottom-dweller, usually found on sandy floors in depths between 0-65 metres. They are frequently found on coral reefs, in lagoons and passageways, preferring rugged terrain that provides shelter, but may be found lying relatively exposed in a depression or crevice.

Leopard sharks are classified as 'Vulnerable'. Fishermen catch them for their meat, which is eaten fresh or dried salted. The rest of the body is made into fishmeal. The oily liver of this animal is used to make vitamins. Its fins are used for shark fin soup or in the traditional Chinese medicine trade.

Sharks play a crucial role in reef and ocean ecosystems. They prey on weak and diseased animals. Human choices and interference have caused their numbers to decline. FAO (Food and Agriculture Organization of the United Nations) member countries have been working for about a decade to create a plan of action for the conservation and management of sharks throughout the world. Many participating countries have been successful in their efforts. However, the vast size of the ocean and the lack of law enforcement in many areas has lead poor conservation records and management of sharks globally.

There are many great destinations for diving in the presence of a leopard shark:


Dive The World Recommendations: Phi Phi Islands, Phuket and the Similans in Thailand, and Burma.

... The reservations process was thorough and helpful. Pip did a good job of making me confident that I had chosen a good booking company and what I needed to do to find the shop/boat etc ... -- Dave Brown, USA.  [More customer reviews]