The Most Colourful and Charming Fish in the Sea

Dusk is the moment when one of the most fascinating events in the marine world occurs; the mating of mandarinfish. And sitting on a chair watching the sun set is a no-no for keen divers, especially if you find yourself in somewhere like Kapalai or the Lembeh Strait!

Scientifically known as Synchiropus splendidus, the mandarin fish, is also one of the most stunningly beautiful and interesting fish in the ocean. They could well be the most distinct patterned creature you have ever seen when you dive.

The mandarinfish is a popular photographic subject due to its striking beauty and interesting habits. An extremely small and shy tropical fish, it can be a tricky photographic subject, coming in and out of view, appearing only briefly at dusk to mate and seemingly wishing to avoid any bright light. 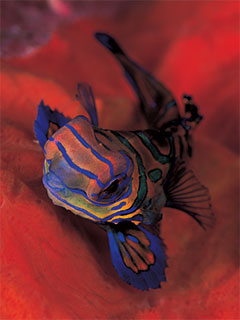 Why mandarinfish? Actually, the name comes from its bizarre and extreme coloration, which resembles the robes of an Imperial Chinese officer (mandarin). The standard colours of the fish are a blue background with wavy orange lines. Although it is dominated by blue, yellow, orange, purple and green are also present on the body of this fish, which seems to have come from the imaginative mind of a child with colouring pens. These fish are also sometimes called psychedelic fish due to their rather bizarre hues which have to be seen to be believed.

They are highly reclusive during the day, but may be seen perched on or hopping between coral branches. They swim with a rapid pulsating of their fins which tends to make them look like they are hovering much like a humming bird.

It is an easy task to distinguish the mandarin fish from their cousin species, mainly by the coloration. Closely related to them is the spotted mandarinfish (Synchiropus picturatus) which has a green background with orange, blue and black spots on it. Another similar-looking species is the picturesque dragonet (synchiropus picturatus) whose body is greenish to light brown, covered with large dark spots ringed with orange and green, and blue-green band markings around its eyes.

Mandarinfish eating habits represent another similarity to birds, meaning they usually study their food before they eat. They are fussy, careful, slow eaters and therefore are not a strong contender in finding food. They feed mainly on small worms, protozoans and small crustaceans such as isopods, mysids and amphipods. If you have a chance to come face to face with mandarin fish, look closely at one of its most remarkable features: their big outward-set eyes. This pair of eyes is an ideal adaptation for food hunting and feeding in the dim light environments underwater, which offers a wide variety of tiny invertebrates suitable for their diet.

Just before the sun sets, 3 to 5 females will make their way to a particular region of the reef and gather where males visit and display courtship behaviour, hoping to attract the females. The visiting males may tour around various sites in one evening spreading their sperm among a number of different females. Lucky guys!

A successful male will then be joined by a female that will rest on his pelvic fin. The male and female mandarinfish will align themselves belly-to-belly and together, slowly rise about 1 metre above the reef. Once they are at the peak of their ascent, they will release sperm and a cloud of eggs (usually up to 200 eggs). The fish then disappear in a flash. The fertilized eggs are from that point at the mercy of the current and normally take around 18-24 hours to hatch into 1 mm long larvae. For a period of up to 2 weeks, they will remain plankton with no parental involvement before finally settling on the reef and choosing an appropriate habitat where they will live for the next 10 to 15 years.

With only a small number of active females in a group's population, competition among the males is high. In the world of mandarinfish, size does matter! The bigger and stronger males tend to be favoured by females and mate more often than smaller males. Due to the lower chances of mating, the smaller males have developed a rather desperate compensating measure. They are known to rush up to mating pairs and release sperm with the hope of random fertilization. Thankfully this behaviour is not often seen among the human species except in some 'special interest' movies! (which may be downloaded from the website at ...)

For any semi-serious diver, this unique mating ritual is certainly a must-watch event. It is known that mating occurs for several months each year, so there are no excuses for not having a ringside seat at this most intimate of displays.

The mandarinfish is one of the few marine fish which does not have scales. As a protective compensation to its lack of scales, the mandarin fish is protected by a mucous-coated slimy and smelly skin, which not only protects them from most parasitic skin diseases, but also discourages predators due to its horrible taste. Their bright vivid coloration also serves to give out warning to predators of their nasty smell and taste.

There is little information on specific predators of this species, although scorpionfish are known to lie in wait to attack an unsuspecting mandarinfish, normally during the mating ritual.

Mandarinfish are shy and mostly passive. Normally they are found inhabiting broken coral rubble beds or under dead coral. They are so shy that any heavy breathing or movement will scare them away back to their shelters. They are usually found in groups or in pairs on reef crests and slopes in sheltered lagoons throughout much of the Western Pacific and in the Coral Triangle of biodiversity, which includes Malaysia, Indonesia, the Philippines and Australia.

The species is threatened by overfishing, destructive fishing methods and destruction of habitat. Unfortunately, due to their strikingly beautiful coloration and cute movement, mandarin fish are highly sought after by the aquarium trade and many are specifically targeted for removal from their marine habitat to satisfy this demand. Since they are notoriously fussy eaters and are also very picky about the water condition they like to inhabit, they are not really suitable for the aquarium trade and many die in such conditions.

There are several great destinations for scuba diving in the presence of these colourful creatures:


Dive The World Recommendations: Banda Islands and the Lembeh Strait in Indonesia, and Mabul and Kapalai in Malaysia.

... The honesty and the fine delivery where Dive The World delivered more than what I expected. For the weakness I can only say a bit of delay because of time difference. It would be good if you had a 24/7 chat service only if you are expanding worldwide ... -- Meshal Al-Omar, Kuwait.  [More customer reviews]