Tawny nurse sharks are quite commonly encountered by divers. You may see them lying on a sandy floor or huddled together in their favourite cave or crevice during the day, or witness them hunting on a night dive. Nurse sharks are easily recognised by their elongated caudal fin (tail) and barbels (thin, fleshy, whisker-like organs on the lower jaw in front of the nostrils that sense taste and touch).

But how much do you know about this gentle bottom dweller? Why is it called a nurse shark? How are tawny nurse sharks different to other nurse sharks? Does it have any teeth? Let’s answer all these questions and more… 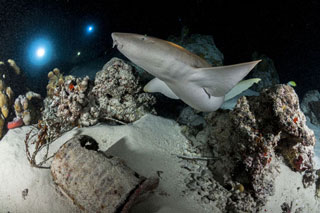 
This unassuming shark is the only surviving member of carpet sharks in the family Ginglymostomatidae. ‘Carpet shark’ is the common name for the group of 39 Orectolobiformes sharks. They have acquired this unique colloquial name as many species resemble ornately patterned carpets. They are often described as ‘bulky’ with the longest specimen on record being 3.2m. They are grey-reddish-brown in colour but are chameleon-like, in that the individual has the ability to modify their colour according to their background.

The tawny has a cylindrical body with a broad, flattened head, with a squarish snout and tiny eyes. They are quite similar in appearance to the nurse shark that is found in the Atlantic and East Pacific. The tawny nurse shark has a couple of features that distinguish them from other nurse sharks. The most obvious is their sickle shaped pectoral fins. The less apparent anatomical difference, unless a diver touches the shark, is their soft skin. Their Greek name ‘Nebrius’ can be translated to ‘skin of a fawn.’

Tawny nurse sharks have barbels, powerful jaws and sharp comb-like teeth that overlap. They have approximately 30 rows of teeth in their upper jaw and 27 rows in their lower jaw. They range in colour from yellowish, reddish, to greyish brown on top, and off-white on their belly. There are no ridges present on the body. Their caudal fin (tail like) is moderately long, measuring over a ¼ of the total length of the shark.

During the day, these sharks are gregarious, generally found in a favourite crevice or cave, together in large groups of up to 2 dozen individuals. They are often seen piled inertly across or on top of one another. When resting, they are extremely sluggish. They breath via buccal pumping (their cheek muscles pull water into their mouths and over the gills), therefore they can remain motionless for long periods of time.

The tawny nurse shark has a more calm disposition compared to other nurse sharks and adventurous scuba divers have been known to touch them. A few non-fatal attacks have been recorded. These occurred when they were being ‘handled’ by divers. Due to their large size and strength, the tawny nurse shark should be regarded as potentially dangerous and treated with respect.

They are hardy and thrive in captivity which unfortunately sees them kept in aquariums across the globe, where they are often handfed. They can be feisty when on the end of a fishing line and have been known to ‘spit’ water in the faces of their hunters. Tawny nurse sharks are one of the few species of shark to produce sound. When threatened, and out of their natural aquatic environment, they make grunting sounds between ‘spitting’ streams of water.

Their diet includes a variety of bottom dwelling lobsters, crabs, sea urchins, reef fishes (including surgeonfish and siganids), octopus, other invertebrates and occasionally sea snakes. They are known to return to the same area in the morning to rest during each day.

Tawnys are nocturnal feeders and have short home ranges, they prowl slowly around searching for prey at night. They capture their prey in an unusual manner; they move along the bottom and explore depressions, holes and crevices in reefs. When they detect prey, the shark positions its small mouth very close to the victim, and uses its large pharynx as a powerful suction pump to rapidly inhale their meal.

Another tactic used by this species is brute force. A 3m tawny nurse shark was filmed extracting a speared fish from under a coral head by wedging its body under the bommie and lifting its head and body to raise the entire coral structure! The shark continued this behaviour until it was able to get close enough to suck the fish from the coral head. The bommie was estimated to weigh in excess of 450 kilogrammes! Dive The World obviously does not condone the tactics used by the film maker, however it does illustrate the strength and tenacity of this shark.

Sexual maturity is determined by length in this species of shark. Males are sexually mature at approximately 2.5m and females at 2.3-2.9m. They have low reproductive rates and the frequency of reproduction is unknown.

Despite its abundance and being kept in captivity, little is known of its reproductive processes. Female tawny sharks have one functional ovary and 2 functional uteruses. They are aplacental viviparous. Their embryos ‘hatch’ inside the mother, from chondrichthyes. These egg capsules, are sometimes referred to as a mermaid’s or devil’s purse.

The tawny shark embryos are oophagous, unique among carpet sharks, meaning that while they are still inside the mother’s uterus they feed on eggs produced by the ovary. Generally 1 to 4 pups are born (however up to 8 live young have been recorded) and each measures about 40 cm. Juveniles can be distinguished from adults by the presence of small dark spots on their skin.

Little has been documented about the life of young tawny nurse sharks. Large females have been observed in the Chagos Archipelago (about 500 km south of the Maldives) in the company of a single juvenile (less than 1m long) which may be a year old pup of hers. Juveniles are known to rest on their pectoral fins, which are rolled under their bodies. It is thought that the space under the bodies of these predators may be mistaken for a home by a shelter-seeking fish or shrimp, unfortunately for the poor unsuspecting individual they become the tawny's next meal.

Tawny nurse sharks have few natural predators if humans are not included. If they are unfortunate, they may fall prey to other sharks such as bull sharks, great hammerheads and tiger sharks.

There are 5 species of tapeworms documented in the spiral intestines of the tawny nurse shark taken from the waters off Australia and French Polynesia.

Tawny nurse sharks are found on sandy flats, rocky and coral reefs, seagrass beds, bottom substrate in lagoons and in the surf zone. They have been known to be in depths that range from intertidal water that barely covers their body, up to 70m. However, they are most frequently found between 5-30m.

They occur across the Indo-Pacific region. Their habitat is vast, it includes areas from KwaZulu Natal in South Africa up to the Red Sea (including Madagascar, Mauritius, the Chagos Archipelago, the Seychelles) as well as the Persian Gulf, India and the Maldives. They are also found in the western Pacific, from southern Japan, China, Philippines, Malaysia, Singapore, Vietnam, Papua New Guinea and Indonesia, as well as northern Australia. This widespread species is also known to occur in New Caledonia, Samoa, Palau, the Marshall Islands and Tahiti.

Their natural habitat occurs in inshore areas that are heavily fished. Reef habitats and local food environments have been damaged from dynamiting and poisoning in portions of its range. They are victims of commercial fisheries across their habitat, except Australia where they are only victims of bycatch. They are frequently caught in demersal trawls, floating and fixed bottom gill nets and via hook and line fishing.

Tawnys have contradictory behaviours, being both docile on the ocean floor during the day as well as being nocturnal active-swimming predators with a fighting spirit. This characteristic coupled with their large size makes them a target for sports fishermen.

The tawny nurse shark is heavily fished commercially. The meat is used as fishmeal, its liver is rendered for oil and vitamins, and fins are sought for the oriental sharkfin trade. Their skin is thick and ‘hide-like’, and is used for the manufacture of purses.

The International Union for Conservation of Nature (IUCN) is a global union of states, governmental agencies and non-governmental organisations in a partnership that assesses the conservation status of species. The tawny nurse shark is classified as vulnerable (VU) on the IUCN Red List.


Dive The World Recommendations: the Maldives, Burma and The Red Sea.

... It was easy to find the information. The booking went fine, very good and helpful contact from Pip and the others. You had a lot of patience with us, because we forgot to mail sometimes, and kept on contacting us. ... -- Graziella Eckert, Netherlands.  [More customer reviews]