Due to their intelligence and playfulness, dolphins have always been very popular with humans. We have been fascinated with them for as long as we've known they exist and some cultures even worship and revere them. 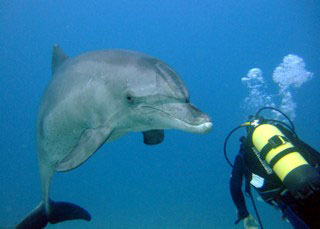 It is on many peoples must-do list to swim, snorkel or dive with dolphins and those who have done it are all in agreement that it is an amazing and sometimes life-changing experience. During a dolphin encounter people often feel that they are the ones being studied!

The dolphin family are mammals that are believed to have evolved from hoofed land animals around 50 million years ago. The Orca, also known as killer whale, is not a whale at all but actually the largest species of dolphin. They can grow up to 9.6 metres long and get their name from the fact that they have been known to occasionally hunt whales - "killer (of) whales".

The best known and most loved dolphin species is the bottlenose - made famous by aquatic shows, films and the 'Flipper' TV series. Bottlenose dolphins grow up to a length of 2.8 metres.

Dolphins are classed as cetaceans. This describes the family of mammals that have adapted to living in water and includes dolphins and porpoises as well as whales. Oceanic species of dolphins number 32 and there are also 5 species of river dolphins which are a closely related family.

Like all mammals, dolphins are warm-blooded with a body temperature similar to humans - around 36°C. They have a very thick layer of fat under their skin, known as blubber, which maintains the internal temperature. They have no hair, unlike most other mammals, and smooth, thick, glandless skin.

Dolphins have lungs and breathe air which means they have to rise to the water surface regularly. Their nostrils are located at the top of the head and are known as 'blow holes'. Dolphins usually stay under the surface for a just a few minutes at a time between breaths.

The size of dolphins varies according to the species. The smallest are the tiny Maui dolphin and the largest are the huge killer whales, or Orca. Shape and colouring vary between species but most are a shade of grey often with a lighter underside and contrasting markings.

The head of all dolphins contains the 'melon' which is a round-shaped organ that is used for echolocation. Most have elongated jaws that form a distinctive beak and some species like the bottlenose, have a smiling-shaped mouth. Dolphins have very good vision both in and out of the water although they don't see colours very well.

Dolphins use echolocation like radar to find food and let them know where the fish are. They eat a variety of fish which includes snapper, tuna, bream, whiting and mullet. They also eat invertebrates such as squid, octopus and cuttlefish. In the wild, their diet can depend upon the area they are living in and the time of year.

The quantity a dolphin needs to eat depends on the type of fish and its fat content. Fish with a higher fat content provide more energy and therefore a lesser quantity is needed. Studies show that most dolphins need to eat a third of their body weight each day.

Dolphins are social creatures and live in life-long groups. These groups vary in size, from 2-40 animals known as pods, to huge groups numbering up to several hundred called herds or schools. 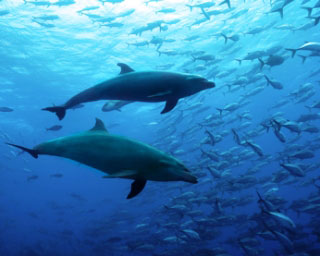 Often dolphin groups will have a power hierarchy with one or two individuals dominant over the others. All types of pod and herd groups are skilled in co-operating together in activities such as hunting for food, defence, giving birth and caring for the young. There are often strong social bonds between members.

A technique called echolocation is used by dolphins to make sense of their environment, navigate and find food. The dolphin emits a series of sounds or 'clicks' through its blowhole which are of a very high frequency. The sound waves bounce off objects in their path and part of that signal is reflected back to the dolphin. The signal is received through special tissue in the lower jaw and carried to the inner ear where it is converted into tiny nerve impulses and sent to the brain. In this way dolphins are able to identify objects without touching or seeing them.

Dolphins spend a great deal of their time in sexual play and don't just have sex for reproduction; they enjoy it. They are not monogamous and my mate several times during a short period when aroused, and not always with the same female. Dolphins will mate no matter what the age, size or family relationship is of the other dolphin, and homosexual behaviour has been documented.

Courtship is an important part of dolphin mating and can continue for days. The male and female will swim together petting each other with their fins and making elaborate calls. Copulation is very brief in comparison and only lasts a few minutes but may be repeated several times within a short period. Dolphins mate all year round and up to 50 times a day.

Female dolphins reach sexual maturity between 7 and 12 years old depending in the species, males at between 10 and 15 years. However, most dolphins become sexually active before reaching sexual maturity. Females will give birth every 3 to 5 years throughout their life to 1 calf at a time.

A pregnant female gives birth after a gestation period of between 10 and 12 months, depending on the species. The birth is assisted by another dolphin who acts like a midwife and the rest of the pod will surround the mother to protect her during labour.

When the baby is born the mother will gently lift the baby to the surface to take its first breath by swimming beneath it. Like other mammals, baby dolphins are nursed from mammary glands and this will continue for between 12 to 18 months. The mother is very protective of her young and the calf will stay by her side for up to 5 years.

Dolphins can live up to 35 years but some species live to only around only 17 years.

The only natural predators of dolphins are the larger species of sharks such as bull sharks, tiger sharks, dusky sharks and great white sharks that prey on babies and the smaller dolphin species.

The biggest threat dolphins face is from human beings and despite our love for them, humans kill more dolphins annually than any other animal and dolphin populations have been decimated around the world.

The future is very uncertain for some species of dolphin. Several river dolphin populations have been decimated due to man-made factors such as damming, pollution, development of the shore-line and boat traffic. 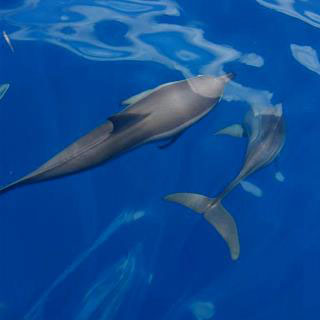 Sadly there are even more species that are vulnerable but there is not enough scientific data to include them on the list.

Industrial Fishing - Tens of thousands of dolphins are killed annually through fishing technologies. The most notable methods are purse seine fishing, drift nets and gill nets.

Traditional Food Source - Throughout the world thousands of dolphins and also small whales are still hunted for food and products such as fertiliser and oil.

Japan is the largest consumer of dolphin meat and the annual dolphin harpoon hunt in Taiji has received international criticism for its mass slaughter of over 20,000 dolphins.

Many dolphin deaths are also caused by the ingestion of objects such as balls, bits of plastic and nets. Death due to boat collisions with boats and in particular propellers is also common.

Toxic Marine Habitats - Toxic pollution of the marine environment may be the greatest threat to the future survival of dolphins. Toxins such as mercury and other heavy metals, PCBs, pesticides, plastics and radio-isotopes are dumped into our seas, rivers and estuaries every day and often in uncontrolled amounts.

The toxins are absorbed into organisms low down the food chain. As dolphins are high up the marine food chain they receive a large concentration of the toxins. Many of these toxins do not break down and are known to damage the reproductive organs and weaken immunity.

Dolphins live all around the world and can be found in waters off every continent - Europe, Africa (including the Red Sea), Asia (including Indonesia and Thailand), Australia, North and South America (including Cocos Island) and Antarctica. They live in cold, deep off-shore waters and warm, shallow coastal waters too.

Some dolphins live in the same area all the time while others migrate in search of food or following weather patterns.

Every year between May and July off the coast of South Africa, the great 'Sardine Run' occurs where thousands of dolphins of many different species can be found. This is high-up on most dolphin lovers must-do list.