Playful Puppies of the Sea

Out of all the marine creatures you can encounter while diving, few seem to have as much fun in life as sea lions do. 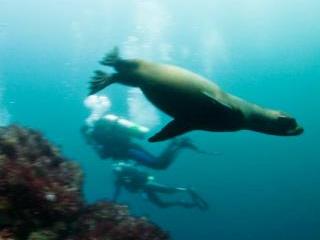 The Galapagos and California sea lion is frequently encountered by scuba divers and despite being fierce predators, these intelligent mammals are curious and playful in the presence of divers.

It is a delight to watch their acrobatic underwater displays, as despite their bulk there are very quick and agile in the water. They seem to love to play with each other, other marine creatures and even divers themselves!

Sea lions belong to their own subfamily 'Otariinae'.

Sea lions have the ability to walk on all fours, have external ear flaps and short, thick hair - all features that can distinguish them from other similar marine creatures. They have transparent coverings over their eyes that reflect light and therefore have excellent underwater vision.

It has recently been established that there is no difference between the subfamilies of seals and sea lions as scientists discovered that the northern fur seal is genetically more closely related to sea lions than to other fur seals.

These mammals are highly intelligent and consequently are used both for entertainment purposes at circuses and water parks, and also by the US military to 'deter' divers. 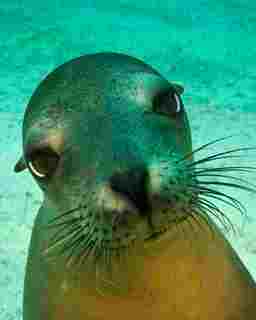 Their natural habitat is sandy beaches or rocky shorelines where they will lay around together in close proximity. In some parts of the world, for example in the Galapagos Islands, they are used to humans and can be seen on jetties, moored boats and even park benches. They are naturally very playful and both Galapagos and Californian sea lions will approach divers and even try to imitate them by blowing bubbles!

Sea lions also play together and play tag or use 'toys' such as starfish or pufferfish. They have also been known to play with marine iguanas but can easily hurt them as they don't seem to know their own strength.

Attacks on humans are rare and only seem to occur when there is dead fish in the water or when they are protecting territory or young pups. However, males should be avoided especially when they're acting aggressively. It is the females that tend to interact with humans and, like dolphins, have been known to help out swimmers in difficulty in the water until help arrives.

Sea lions are efficient hunters feeding on all types of fish, particularly groupers, grunts and snappers. Galapagos sea lions also eat large amounts of salema but they have a particular liking for sardines.

Copulation occurs both in water and on land and can be regulary witnessed on shore in the Galapagos Islands. Gestation takes around 9 months, similar to humans, however the fertilised egg is not implanted for about 2 months after having sex.

The mother normally carries just 1 pup and she will stay with it constantly during the first week to bond. After that the mother will feed during the day and return at night to nurse her pup.

The young pup will learn to swim at just 1 or 2 weeks old in shallow protected pools. The baby coat, or 'lanugo', starts to shed at 5 weeks old when the sea lion begins to look like a small adult.

Pups will stay and feed in the open water with their mother for 2 years, only after this time period will they feed alone. Female pups often remain in the same harem when they reach maturity, however males are forced out by the age of 7 when they will then go looking for their own harem. The bulbous hump on the males head becomes large as he matures identifying him from younger males. Average life span is 20-30 years.

Sharks are the only predator sea lions have and young pups can be susceptible to attack. In the Galapagos they are particularly vulnerable to Galapagos sharks and blacktip sharks.

Mostly found in tropical and subarctic regions. The main species groups include:

Man-made threats to sea lions can be fishing practices as they can become caught on long lines and in nets. They are also at risk from catching distemper from domestic dogs and other diseases from species that are not native.