What Is The Great Pacific Garbage Patch?

The media caught onto the idea that there is a floating island in our oceans back in 2002 when it was highlighted in Yann Martell’s novel, ‘The Life of Pi”, which received the Man Booker Prize award. 10 years on, the movie adaptation was showered with accolades by the cinematography industry and brought international attention to the themes and concepts proposed in the novel. Pi’s island is floating, carnivorous and inhabited by meerkats - it has relatively little in common with the Great Pacific Ocean Garbage Patch; which is not an island, does not technically float and, strictly speaking, not carnivorous – it is however, as hazardous as Martell’s fantasy island. 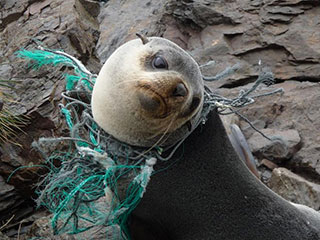 This gargantuan mass spans the waters from the west coast of North America to Japan. The ‘patch’ is made up of the Western Garbage Patch (located near Japan) and the Eastern Garbage Patch (positioned between the coasts of Hawaii and California). These 2 areas comprise of spinning debris; which are also referred to as the Pacific Trash Vortex.

The majority of the debris comprises microplastics that are created by the process of photodegradation (in the ocean, the sun breaks down the plastics into ever smaller pieces). An ‘aquatic highway’ connects the areas and allows garbage to flow between the 2. This ‘highway’ is the North Pacific Subtropical Convergence Zone, located a few hundred kilometres north of Hawaii.

The discovery and size estimate of the patch

In 1988 the National Oceanic and Atmospheric Administration (NOAA) of the United States published a paper hypothesising that a great garbage patch existed in the Pacific Ocean. During the Transpac sailing race in 1999, Charles Moore, discovered this garbage soup. (He is the founder of the Algalita Marine Research Foundation

. The initial estimates of the area covered in plastic garbage was double the size of Texas – or in numerical terms – over 1,390,000 square kilometres!

With today's technology and satellite imagery one would presume that it would be relatively easy to estimate the size and position of this island of shame. Unfortunately it is not visible from the air as the majority of it lies slightly below the surface and it is at the mercy of the oceanic currents and prevailing winds and thus it does not maintain a specific nautical position. The garbage patch primarily comprised of microplastics that are almost invisible to the naked eye and the actual depth of the debris is also problematic to estimate over such a large area.

In an effort to monitor the situation, Algalita has developed a Plastic Ocean Index; which will be launched in July 2016. This tool, according to the organisation, will combine the present in-depth information about the presence of plastic in the world’s oceans and will provide an effective on-going surveillance tool for both the organisation as well as a global online accessible educational resource for students, educators and scientists. We wait with trepidation for the new estimates on the size of the world’s largest garbage dump.

How was it created?

The North Pacific Subtropical Gyre surrounds the Great Pacific Ocean Garbage Patch. National Geographic Encyclopaedia explains an ocean gyre as "a large system of circular ocean currents formed by global wind patterns and forces created by the Earth’s rotation. This gyre is created by the interaction of the California, North Equatorial, Kushiro, and North Pacific currents. These 4 currents move in a clockwise direction around an area of approximately 20 million square kilometres".

The following example is provided to explain how the world’s plastic arrives in a specific area in our oceans. "The area in the centre of the gyre tends to be very calm and stable. The circular motion of gyre draws debris into this stable centre, where it becomes trapped. A plastic bottle discarded off the coast of California, for instance, takes the California Current south toward Mexico. There, it may catch the North Equatorial Current, which crosses the vast Pacific. Finally, the bottle travels westward on the North Pacific Current. The gently rolling vortexes of the Eastern and Western Garbage Patches gradually draw in the bottle".

It is estimated that boaters, offshore oilrigs and large cargo ships are responsible for 20% of the debris that make up the Great Pacific Garbage Patch. About 705,000 tons is made up of fishing nets, however some more unusual items have also been discovered, such as Lego and computer monitors. A hefty 80% comprises land-based trash from North America and Asia.

What does the future hold?

Take a moment to look around you, count the number of items that contain plastic. Now consider the following:

Considering the above, it would not be surprising to learn that less than 5% of plastics are recycled worldwide and enough plastic is thrown away each year to circle the earth 4 times!

This paints a bleak picture, however it gets worse… How does our modern, consumerist society impact our home, the very planet that sustains us? This garbage patch affects the entire food chain in our oceans. It blocks sunlight, thus limiting the growth of autotrophs, more commonly known as algae and plankton.

During the process of photodegradation, harmful colorants and chemicals are leached into the water. Simultaneously, plastics can absorb PCBs and will enter the food chain when these microplastics are eaten by marine life, poisoning them and those that consume them (yes, that includes you and me!). It is estimated that hundreds of thousands of sea turtles, whales and other marine mammals and more than 1 million seabirds die each year from ocean pollution and ingestion, or entanglement in marine debris.

What can we do in our daily lives?

Should we all throw our hands up in the air and say "we are doomed", so let’s continue killing our planet? No country is responsible for the area in which the Great Pacific Ocean Garbage Patch is located and no country certainly wants to take on the crippling clean up cost. But there is hope ...

We can all adjust our daily habits, change our consumerist lifestyle. Just watch 'The Story of Stuff'

- it will surely make you rethink the choices you make). Have a voice and influence policy-makers and we can empower the next generation to be ambassadors for a healthier planet.

What can we do about the Great Pacific Garbage Dump? 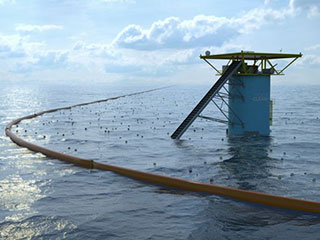 So what can be done about the world's largest garbage dump? Up to now, almost all clean up proposals have not gone past the theory stage as they will also result in yet more losses to marine life.

Enter 20-year-old Dutch entrepreneur Boyan Slat, who combines environmentalism, creativity and technology to tackle global issues of sustainability. He was crowned 2014 'Champion on the Earth', the United Nations’ highest environmental award. His invention has been recognised as Design of the Year by the London Design museum. Slat’s project is part of the non-profit he runs, Ocean Cleanup

His plan to clean the world's oceans focuses on a 3-pronged approach – Extraction, Prevention and Interception. He has devised a system of floating plastic barriers that holds a net-like device (which will not be harmful to marine life) and has the potential to remove more than 70 million kilograms of plastic waste in 10 years. His invention is not only removing waste, it is also breaking records – the 6,500 foot-wide apparatus has been labelled the longest floating structure to ever be put in the ocean.

What does the future hold?

Many have speculated that his invention and plan to clean the oceans will not work. In response the Ocean Cleanup Array has undergone a year-long feasibility study. This study was conducted with a team of over 100 scientists and engineers working with Slat and has found that such a device “is indeed likely to be a feasible means of cleaning up almost half of the Great Pacific Garbage Patch within 10 years.”

Many hold high hopes for the success of his invention which is set to be deployed near Japan in July 2016, and why wouldn’t we? What other potential solution is on offer?

Yet while the world watches to see if these giant ocean vacuum cleaners will indeed suck up our dirty mess of plastic trash, we will still need to focus on the top of the pollution chain. By reducing our own plastic consumption and urging manufacturer and policy-makers to tackle the issues where they begin, on land, there is hope for the future.

... No Hassles - everything was executed without any problems, very easy and your people are very friendly ... -- Mitchell C Warachka, Singapore.  [More customer reviews]