The Tiger of the Sea

Barracudas are perhaps one of the most feared marine creatures for non-divers but those in the know crave underwater encounters with these sleek and misunderstood creatures. However, many such divers might agree that their villain appearance could send a shiver down the spine. With a set of fang-like teeth, no wonder barracuda are considered brutal predators.

But the question is, are they really as dangerous as they are perceived to be? Well, despite their appearance and predatory success, reports of attacks on humans are very rare indeed.

In fact, this creature is more famous as a photographic model rather than as a criminal of the sea. Divers dream of being in the middle of a tornado of barracudas as they slowly circle around and around in a vortex. This can be one of the most memorable experiences in their log-books and scuba diving memories. So forget about their brutal legend and let's get to know this supposedly fearsome and undoubtedly interesting creature. 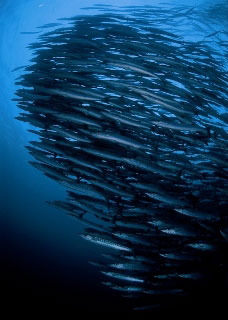 Barracudas are of the genus Sphyraena, which in Latin, means a 'pike-like' fish. They have developed a highly efficient body, perfectly adapted as a successful predator of the ocean. Their bodies are elongated and slender, perfect for sneaking through the reefs when hunting. They have large mouths and a pair of powerful jaws. The lower jaw juts out slightly and they have unequally sized fang-like teeth which have earned them the nickname 'Tiger of the Sea'.

Other distinguishing features are the 2 extensively separated dorsal fins and a forked tail fin which makes them fast swimmers. Like most fish, barracuda do not have eyelids. If you see one moving very slowly, it is possible that they are actually asleep. However when asleep, they are still alert for danger. You would be wise to avoid disturbing one from its sleep since it may react aggressively to such a rude awakening.

In terms of coloration, barracudas are normally grey or silver on top fading into white on the belly with whitish tips on their dark violet caudal fins. Their size varies depending on species.

Worldwide, there are 26 species of barracuda. It is normal for scuba divers to come across more than 1 species at certain dive sites, so it pays to be able to identify the different species.

To distinguish the great barracuda (Sphyraena barracuda) from other species, you could look for the black spots on the lower sides of its body. Additionally there are usually about 18 to 25 dark bars present on the upper side of each fish. The tail also has 2 dark bars or tips, 1 on the lower fin and 1 on the upper. It is the largest in the genus, usually about 1.5 metre long but may reach as much as 1.8 metres and weigh 50 kg. It is widely dispersed, being present in the Indian, Pacific, east and west Atlantic, and Caribbean Sea.

One of the species you may come across when you dive in places like Sipadan or Bali's Lembongan Island is the chevron or blacktail barracuda (Sphyraena genie), named after the obvious chevron markings on its body. A feature that distinguishes Sphyraena genie further from Sphyraena barracuda is their blackish caudal fins. At Barracuda Point in Sipadan, you have a pretty good chance of being in the middle of a swirling vortex of this species, definitely a highlight of your Sipadan dive experience. The fish lives throughout the whole Indo-Pacific region.

The pickhandle barracuda (Sphyraena jello) is another close relative and is distinguished by the presence on its body of dark marks resembling pickaxe handles. Unlike Sphyraena genie, most of its caudal fin is slightly yellow. This species normally grows to 1.5 metres long. These are Indo-West Pacific fish.

Another relative is the yellowtail barracuda (Sphyraena flavicauda), which has yellowish caudal fins and 2 brown yellow stripes. It is one of the smallest species of barracudas and grows to a maximum size of 60 cm. These are commonly found in throughout the Indo-West Pacific region.

Generally, adult barracudas are considered to be solitary when it comes to hunting. Most young juveniles tend to gather in large schools, sometimes in numbers up to hundreds or even thousands. Schooling offers the young fish protection from predators on the basis of safety in numbers.

Often, when a predator attacks a school, the school would form a confusing tornado, preventing any one barracuda being fixed upon as prey in the eyes of the predator. For hunting purposes, the many eyes of the school normally cooperate in finding food. Although a large school means a smaller division of food among them, it actually benefits the individuals both in terms of protection and food detection.

Barracudas usually associate with other fishes such as bar jacks, rainbow runners and big eye trevally (usually associated with Sphyraena genie). Perhaps, one association that these fish are addicted to is the cleaning performed by cleaner wrasse.

The larger species such as Sphyraena barracuda are solitary and not found in schools.

Hunting for food is a serious business for barracudas and thanks to their sharp eyesight and powerful jaws, they are one of a few predators towards the top of the food chain. Known to be extremely opportunistic, they often camouflage near sea grass to ambush unsuspecting prey, and move fast (over 40 km/h) through corals reefs hunting for food. When attacking they do so with a single clean bite of deadly consequence.

They are not fussy eaters at all and mainly feed on smaller fishes such as snapper, grunts, mullets and bream. That said cannibalism is part of barracuda culture. Their powerful jaws can also allow attack on larger fish since they will chop the bigger fish in half. So ultimately anything that seems edible may be fair game and end up in their bellies!

They are said to be attracted to reflective, metallic objects that resemble the types of silver fishes they most commonly eat, so divers might be wise to avoid wearing earrings or other jewellery in their presence if they want to avoid being mistaken for a light snack.

There does not exist a great deal of documented information about where and when the spawning occurs. It is believed to be between April and September. During the breeding season, the females spawn a few times, releasing about 5,000 to 300,000 of eggs each time. Like most fish, barracudas leave fertilised eggs floating in the open waters until they hatch.

Soon after hatching, barracuda larvae settle in shallow estuaries where vegetation offers both protection and food to the larvae for around a year, until they grow into juveniles. Upon entering adulthood, they move to deeper waters in areas with reefs and remain there for the rest of their lives.

Unlike males that mature sexually within the first 3 years of their lives, females take about 4 years. Interestingly, it is not possible to visually differentiate between the genders of this fish.

The age of a barracuda can be measured from the number of rings produced each year in its scales or in a tiny structure called an Otolith found in its ear. Barracudas can live up to 14 years.

Barracudas have adapted into the perfect predators close to the top of the food chain. However, younger barracudas are prey to any types of predators, including their own species. Upon achieving maturity, only eligible predators such as giant tuna, dolphins and sharks would have the guts (literally and metaphorically) to hunt them.

Barracudas are residents of tropical and subtropical waters. They are commonly found in the Pacific Ocean (Fiji, Malaysia and Indonesia), Indian Ocean (the Maldives, Thailand and Burma), the Caribbean and throughout various regions of the Atlantic Ocean. They inhabit shallow waters with reefs, mangroves and sea grass, as well as the open sea.

Aside from those marine predators higher up the food chain, human beings perhaps pose the greatest danger to barracudas. In addition to habitat destruction, climate change and pollution, another threat is 'sport' fishing. They are considered a game species and are much sought after because of the aggressive fight they put up. Sadly, sports fishermen's catch and release technique (banned in some countries that recognise the impaling of fish by hooks causes them extreme pain) normally results in a high number of deaths among the species which in fact are extremely sensitive.

Often compared to tuna and salmon because of their strong flavour, barracuda is eaten either as steak or fillet, smoked or used in soups. Some scientific reports however, have shown their flesh to contain high mercury and cadmium levels and have been linked to the ciguatera cases.

Ciguatera is a kind of food poisoning. The toxins come from several species of algae, which are eaten by marine fish in tropical and subtropical waters. These toxins will build up naturally in the bodies of fish, which in time will be hunted by the predators of the sea, including barracudas, where it becomes more concentrated. Ciguatera is passed to humans by direct consumption of fish meat. So this might be good news after all for the barracuda, if it results in a decline in the human demand for their flesh.

These fish can be found at all our dive destinations, so here we have selected those that offer the best encounters:

... I would certainly use Dive The World again. I found what I was expecting to find, good dive guide and dive instructor, good food and kind crew onboard. My arrival and departure was well arranged and the cruise was safe and pleasant. There's not much to improve on. Things worked well ... -- Paolo Pastore Stocchi, Italy.  [More customer reviews]