Gentle Giants of the Volcanic Islands

No other creature represents the Galapagos Islands more than the giant tortoise. There is a fascination with seeing such huge versions of a creature many of us are familiar with.

Galapagos tortoises display 'gigantism', a state presumably assisted by long periods of isolation where predation is almost absent and food sources are abundant. However, it is probable that it was to an extent a pre-adapted condition since large individuals would have a greater chance of surviving the journey despite osmotic water loss and an ability to endure the arid climate. Fossil giant tortoises from mainland South America support this view.

Estimates of tortoise numbers in Galapagos currently put them at around 25,000 which sounds impressive until one considers that at their height, numbers are thought to have been around 250,000 crawling all over the archipelago.

The species name is Chelonoidis nigra and there are some 11 or 12 sub-species, one of which is represented by a sole surviving individual named 'Lonesome George'. Before knowledge of these different populations became widespread, individuals were indiscriminately mixed in captivity. Resulting offspring showed they were sub-species not species, although the new, crossed generations exhibited lower fertility and higher mortality than pure-breeds. Captive tortoises also show a courtship interest only in members of the same sub-species. 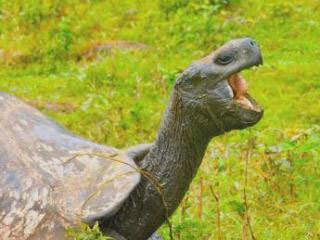 Galapagos tortoises live up to their title of 'giant' by reaching up to 400 kg and having a carapace length of 1.8m. In captivity they can become much bigger than in the wild.

They can be divided into, at most, 14 sub-species. Some have become extinct. Darwin was told by the vice-governor at the time of his visit to Galapagos that he could tell from which island any tortoise came simply by looking at the carapace. While this is a slight exaggeration there are many different features to carapaces throughout the archipelago, with 2 significant extremes: saddlebacks and dome-shaped.

A 'saddleback' comes from an arid climate where resources are limited. A contest between 2 such tortoises involves the giants facing off, stretching their legs and seeing which can stretch their head the highest with their mouths agape. The victor wins and so passes on his height genes. 'Dome-shaped' carapaces are lower and give their giant owner a more tank-like quality, useful in negotiating the dense undergrowth.

As ectothermic creatures (cold blooded), they must bask for an hour or 2 to absorb the heat of the morning sun before spending up to 9 hours a day grazing. On drier islands the tortoises migrate to greener pastures creating well-defined paths known as "tortoise highways". On more lush islands, domed tortoises often congregate in social groups, whereas saddlebacks on drier islands prefer a more solitary existence.

Mud and water pools are often filled with wallowing tortoises. This may help to protect them from parasites, mosquitoes and ticks. Dust baths in loose soil also help to counter parasites.

Giant tortoises are known to have a mutualistic relationship with particular Galapagos finches that remove irritating ectoparasites. The finch hops around in front of the tortoise's face to initiate proceedings. The tortoise raises itself up and extends its neck, allowing the finches to peck at its neck, legs and skin between the plastron and carapace.

Tortoises are vegetarians and are known to feed on over 50 plant species in the Galapagos, including grasses, leaves, lichens and berries. They eat between 32 and 36 kg per day, much of which passes through undigested.

The Galapagos tortoise can go for long periods without drinking water, up to 18 months. This is a great asset in nature but also one which made giant tortoises even more tempting prey for sailors. Compared to dried biscuit and salted pork, fresh tortoise meat was a great treat. The sight of upturned tortoises strapped to the decks and wriggling for months on end, clearly did nothing to affect their appetites.

When thirsty they may drink large quantities of water and store it in their bladders and in their pericardium (also making them useful sources of water on ships). In drier areas, the Opuntia cacti are a significant source of food and water. They have also been seen licking dew from boulders on drier islands, which have even resulted in depressions ion the rock.

Giant tortoises reach sexual maturity between 20 and 25 years and when the time is right the male will mount a female and reach under her shell with his long tail, which houses his penis. The underside of the male carapace is convex so he fits snugly onto the rounded dome of the female and does not slide off.

The male Galapagos tortoise is a noisy lothario and his coital grunts can be heard some 100m away. Hormone-filled males have been known to mount rocks mistaking them for willing females. Unsurprisingly, no records exist of this behaviour resulting in offspring.

Mating can occur at any time but normally between February and June. Females travel several kilometres to nesting areas on dry sandy coastal regions. Using her hind legs she will dig a deep cylindrical hole and deposit her eggs. Dome-shaped females dig 2 to 3 nests a year with up to 20 eggs per nest. Saddlebacks, living in harsher environments, dig 4 to 5 nests a year with an average of 6 eggs per clutch, to spread the risk. In each case she retains sperm from the 1 copulation and uses it to fertilise multiple batches of eggs.

The temperature of the nest determines the sex of the hatchlings, with warmer nests producing more females.

After between 4 and 8 months, the young emerge from the eggs and dig their way to the surface. They will stay in warmer lowland areas for their first 10 to 15 years. Provided they survive the early perils of intense heat, crevices, hungry sailors and Galapagos hawks, they will likely make it to old age.

The life span of a giant tortoise is another amazing aspect to their story. They commonly live beyond a century and it is believed that many live beyond 150 years. The oldest known tortoise was Harriet, who made it to at least 170 years old before her death in Australia Zoo in 2006.

The greatest predators the Galapagos tortoises have seen are undoubtedly humans. That their population today sits at only 10% of their estimated peak, speaks volumes as to the vast numbers killed for food and oil in the last few centuries. Their numbers hit a low of 3,060 individuals according to a 1974 census.

Early settlements of humans accelerated population decline when they were hunted and their habitats cleared for agriculture. The introduction of alien species was as damaging to the giant tortoises as it was for many other endemic species. Feral pigs, dogs, cats and black rats preyed on eggs while goats, cattle and donkeys trampled nests. In natural, endemic terms, only the Galapagos hawk preys on the tortoise and this only in its hatchling phase.

Adults seem remarkably robust and resistant to disease. As Charles Darwin himself recorded, "The old ones seem generally to die from accidents, as from falling down precipices. At least several of the inhabitants told me, they had never found one dead without some such apparent cause".

The best places to see them in the Galapagos are on Santa Cruz or Volcan Alcedo on Isabela Island. Each of Isabela's 5 main volcanoes has a relatively stable sub-species.

Beyond Galapagos, the Seychelles atoll of Aldabra has a huge population of giant tortoises (Aldabrachelys gigantean), some 10 times greater than all of Galapagos, living on a land area the size of the small Galapagos island of Floreana. Another isolated population of this species resides on the island of Zanzibar and other captive populations exist in conservation parks in Mauritius and Rodrigues.

Galapagos tortoises are currently considered 'vulnerable' by the International Union for Conservation of Nature and there are many initiatives underway to save the various sub-species. Dangers are still present and it is estimated that over 200 animals have been taken by poachers over the last couple of decades. With increasing human populations and tourist numbers, pressure continues to be exerted.

If you visit the Darwin Centre in Santa Cruz you can see the ecological efforts to preserve the species. Young are nurtured and reintroduced back into the wild to the islands where their sub-species belong. Slow growth, late sexual maturation and endemism to specific islands, mean that giant tortoises are particularly prone to extinction without the intervention of conservationists. As a result, this inspirational creature has become a flagship species for conservation efforts in the Galapagos Islands.

Where to Find them?

The precise picture with regard to the number of species is subject to change and scientific clarification but at the time of writing some 10 species of Galapagos tortoise are known to exist in the wild. They are one sub-species each on Santiago, Santa Cruz, San Cristobal, Pinzon, Espanola and 5 on Isabela. An 11th sub-species is represented only by the last of the Pinta tortoises, Lonesome George.

... Booking with Dive The World gives me peace of mind. Setting up a fairly complex international trip is made extremely simple with their help. Compound that with the fact that it is a free service, and you absolutely can't go wrong ... -- Graham Carssow, USA.  [More customer reviews]