In 1959 the Ecuadorian government formed the Galapagos National Park. In 1978 the Galápagos Islands were among the first group of sites that were added to the UNESCO World Heritage List. By 1998 the Galapagos Marine Reserve had been extended to its current area of 51,350 miles² (133,000 km²). By strictly regulating the use of these areas, the integrity and interdependence of the marine, coastal, and terrestrial ecosystems of the archipelago will be protected for future generations. 97% of the Galapagos archipelago is national park (See our map of the islands

Over 180 years after Charles Darwin brought the Galapagos archipelago to prominence, the Ecuadorian government has, in 2016, declared a new marine sanctuary around the Galápagos islands of Darwin and Wolf. This welcomed move will ensure that not only the 97% of the land mass that has been protected under the national park (less than 1% of the surrounding water was protected), now marine life will be further protected in an area of approximately 25,000 miles (40,000 km).

Under the terms of the new marine sanctuary, about a third of the Galápagos Marine Reserve will be designated as ‘no-take’ zones. This protection will ensure that fishing will not be permitted at all in the designated areas, and neither will commercial operations such as mining or oil drilling occur in the area.

Set up by the Ecuadorian government in 1968, the Galapagos National Park Service (GNPS) manages the conservation and resources of the national park and marine reserve. 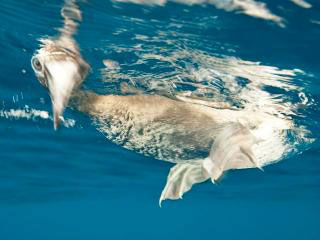 The GNPS protects and preserves the archipelago's biodiversity through a wide range of programs that have been laid out in its comprehensive management plan. GNPS works with the local community, promotes scientific research and creates strategies to address management problems in the islands.

The Charles Darwin Foundation (CDF), an international, non-governmental, non-profit organization, was founded in 1959 under the auspices of UNESCO and the International Union for the Conservation of Nature (IUCN). CDF conducts scientific research and advises the Ecuadorian government and the GNPS on the best ways to conserve the biodiversity of the Galapagos Islands. The foundation operates the Charles Darwin Research Station which has a team of more than 200 scientists, educators, volunteers, student researchers and support staff.

Together with governmental bodies, these groups help to protect the marine and terrestrial environments, keeping Galapagos biologically isolated and providing environmental education. The most important step in controlling introduced species is preventing them from arriving at the islands.

The inspection and quarantine system for the islands hinders the arrival of alien organisms to the islands by setting up a series of checkpoints. All cargo and luggage entering the islands is checked for food products, pests, plants and animals.

Strides have also been taken to eradicate species that have been introduced in the past to the detriment of native species. Dogs, pigs, rats, and goats are among those creatures which attack endemic species or their young or eggs, or simply compete for vegetation. Many islands have eradicated one or more of these introduced animal species.

Tortoises have proven particularly susceptible to danger from such species. Historians estimate that more than 250,000 giant tortoises once roamed the islands. Lonesome George’ was the ‘rarest animal alive’ according to the Guinness Book of World Records. He held this honor as he was the last surviving Pinta Island Tortoise. George passed away peacefully in July 2012. He is now the potent symbol for conservation in the Galapagos Islands.Today, because of over-exploitation, invasive species and habitat loss, tortoise populations have declined by more than 90%.

This reserve is the second largest marine reserve in the world and is the largest in a developing country. It covers an area of around 51,350 miles² (133,000 km²) and includes all the major Galapagos dive sites. 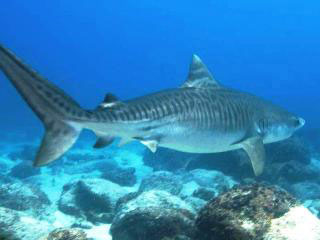 The reserve faces a number of environmental threats. Local sea cucumber and lobster fisheries are struggling and the risk of shark finning is ever present. Increased tourism and increasing local population are bringing further pressure to bear on protected areas.

In the Galapagos Islands some of the most important marine populations are being over-harvested while others are being caught in ways that harm many non-targeted species.

Although currently only small scale fishing is allowed (including spear-fishing!), industrial boats continue to fish illegally within the reserve's 40 nautical mile limit. These boats often use harmful practices, such as long-line fishing, which kill sharks, turtles, sea lions, albatrosses and other marine animals. In addition, thousands of sharks are purposefully slaughtered each year to supply overseas markets with shark fins for traditional dishes.

These and other potential threats to the marine population will possibly be reduced with the designation of the new marine sanctuary within the national park. In the words of Ecuador president Rafael Correa: “The Galápagos Islands have extraordinary ecological value, and also economic value. The government of Ecuador supports the creation of a marine sanctuary to leave an inheritance to our children and our children’s children; a wonderful world where as many species as possible are preserved for the enjoyment and knowledge of future generations.”

For everyone who visits the Galapagos Islands, there is an entrance fee of US$ 100 for adults and US$ 50 for children under 12. Your entrance fee will contribute to preserving the future of the islands and it is distributed as follows:

Note that you pay the park fee at the airport upon arrival so have the cash in US dollars for ease of payment.

Rules to obey when in the park

Strict guidelines exist to allow tourist visits without negatively impacting the wildlife or the ecosystems. These include:

Set in an area of 1,850 miles² (4,800 km²), the Galapagos consists of 6 principal islands, 12 lesser ones and over 40 outcrops too small to be called islands. Geologically speaking, the islands to the west, particularly Fernandina and Isabela, are the latest to arrive on the scene and still demonstrate some volcanic activity. This is no surprise since the islands sit above the intersection of 3 plates of the earth's crust. They are a fine example of an oceanic archipelago, unconnected to a continent.

The initial Spanish settlers named the islands from the word ‘galapago’, meaning a type of Spanish saddle of which the tortoise shells were reminiscent. One can only imagine their sense of wonder at the levels of endemism to be found here. Not only would they have marveled at the marine life, land creatures and the variety of bird life but they would also have not failed to notice that some 40% of the flora species are endemic to the islands.

The Galapagos were first named and detailed in 1525 but with no attempt to claim them. For centuries thereafter, passing soldiers and pirates would occasionally dock to allow time to rest and repair their ships, or to hide away prior to conducting coastal attacks on Peru or Ecuador. The whaling industry also saw the islands used as an important way-station until the late 1800's.

Only as recently as 1832 did Ecuador assert a territorial claim with the establishment, on Floreana Island, of a colony of exiled soldiers. A ship sailed past less than 3 years later and onboard stood a man whose observations and conclusions would change the world. Charles Darwin recorded notes on the flora and fauna he encountered and such notes became a cornerstone of his theory of evolution (read our articles on: On the Origin of Species and The Voyage of The Beagle).

How he must have marveled at the tameness of these ‘wild’ creatures. He soon concluded that timidity, so important in other ecosystems in avoiding predators, must not be necessary where there is a lack of predation. Hence the seemingly friendly, sociable behavior of many of the species found in the Galapagos.

Although the theory that complex organisms have developed gradually over time from simpler ones had been around for some time, Darwin made an incredible breakthrough. He gathered so much corroborative evidence and built on this initial premise with his explanation of natural selection that it was his work, supported by his eminence, that caused a seismic shift in the way people thought about the natural world.

In 1935, 100 years after Darwin's first visit, parts of the islands were decreed as wildlife preserves in a sign of what was to become the ultimate fate for the archipelago. The 2nd World War saw the U.S. Navy establish bases in the islands. In 1960 the Charles Darwin Foundation for the Galapagos Islands began operations and has been conducting vital survival and repair work for the benefit of the islands' ecology and animal inhabitants ever since.

Mass tourism in Galapagos - should you be concerned? 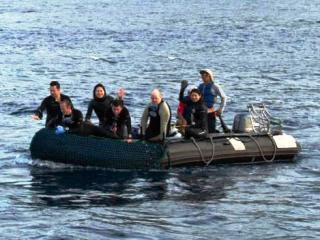 There are currently 6 liveaboards operating in the Galapagos Islands with apparently another 10 permits remaining to be taken up. This means that the number of liveaboards that conducting scuba diving activities is strictly limited. These boats are subject to a number of restrictions in activity:

By contrast there are dozens and dozens of land tour boats. Some can sleep over 100 guests. These are the operations responsible for the kind of mass tourism that can cause serious environmental degradation, yet they seem not to be restricted in number and are not subject to such limitations on activity as are the diving liveaboards.

How you can make a difference

Go to these websites: www.darwinfoundation.org

... When my trip was cancelled due to not enough people booking, Oor [Dive The World staff] was able to book another similar boat immediately, also there were no delays with email replies which is often the case and can be frustrating, so thank you Oor! ... -- Kym Beaton, Australia.  [More customer reviews]