The Voyage of the Beagle

The Galapagos Islands and Much More

Charles Darwin's 'On the Origin of Species' was a book that changed the way human beings think and is undoubtedly the greatest work of his, and arguably anyone else's, scientific career. However, the journey that gave birth to his great work was also recorded as a travel journal in the publication commonly referred to as 'The Voyage of the Beagle'. 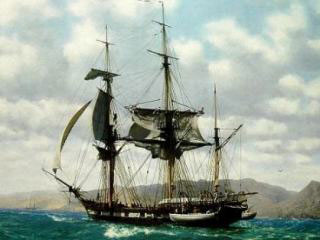 Setting sail from Plymouth, England on 27 December 1831 for a proposed 2 year journey, the Beagle would not return until 2 October 1836 after almost 5 years. The journal, first published 3 years later, with further revised editions following, hints at Darwin's future grand theory, but can also be read as the wonderful adventures of an enthusiastic and inquisitive young man experiencing the fascination of a world not yet well-traveled.

Although one tends to associate the voyage with Darwin's experience of the fauna of the Galapagos Islands, his travels encompassed much more than that. He records a broad range of scientific observations in the fields of geology, anthropology and of course, biology, for which a reading of his main opus is a necessity. 'The Voyage of the Beagle' however, gives more of an insight into the man himself and the world that was opening up to him through his many fascinating experiences in foreign lands.

In an early chapter Darwin embarks on a trek along the Portillo Pass in the Cordillera, which runs through Argentina and Chile. The high, cold ridges were clearly impressive to the young Englishman whose observations reveal his sense of wonder:

"On each side of the ridge we had to pass over broad bands of perpetual snow, which were now soon to be covered with a fresh layer. When we reached the crest and looked backwards, a glorious view was presented. The atmosphere resplendently clear; the sky an intense blue; the profound valleys; the wild broken forms; the heaps of ruins, piled up during the lapse of ages; the bright-coloured rocks, contrasted with the quiet mountains of snow; all these together produced a scene no-one could have imagined. Neither plant nor bird, excepting a few condors wheeling around the higher pinnacles, distracted my attention from the inanimate mass. I felt glad that I was alone: it was like watching a thunderstorm, or hearing in full orchestra a chorus of the Messiah".

Darwin displays not only a love of nature (and semi-colons) but also a gift for lyrical prose that fully conveys the beauty of his experience. The Voyage of the Beagle is heavy with detailed scientific data but to the layman, Darwin's personal touches are what make it such an interesting read. He is also deeply touched by the individuals he meets and their struggles to survive in sometimes very harsh circumstances. His journal is peppered with interesting anecdotes such as the following also from the same area in South America:

"In the Cordillera further southward, people lose their lives from snow-storms; here, it sometimes happens from another cause. My guide, when a boy of 14 years old, was passing the Cordillera with a party in the month of May; and while in the central parts, a furious gale of wind arose, so that the men could hardly cling on their mules, and stones were flying along the ground. 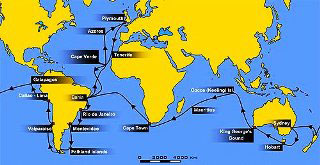 The day was cloudless, and not a speck of snow fell, but the temperature was low. It is probable that the thermometer would not have stood very many degrees below the freezing-point, but the effect on their bodies, ill protected by clothing, must have been in proportion to the rapidity of the current of cold air.

The gale lasted for more than a day; the men began to lose their strength, and the mules would not move onwards. My guide's brother tried to return, but he perished, and his body was found 2 years afterwards, lying by the side of his mule near the road, with the bridle still in his hand. 2 other men in the party lost their fingers and toes; and out of 200 mules and 30 cows, only 14 mules escaped alive. Many years ago the whole of a large party are supposed to have perished from a similar cause, but their bodies to this day have never been discovered. The union of a cloudless sky, low temperature, and a furious gale of wind, must be, I should think, in all parts of the world, an unusual occurrence".

One observation that we can, with hindsight see is pregnant with importance, is made when Darwin muses on the similarities of 2 sets of islands which, being located so very far apart, are home to such a different array of life. One can imagine the young Charles Darwin rubbing his chin as he sits at his cramped desk on the Beagle and staring out at the horizon as he pens the words:

"It is probable that the islands of the Cape de Verde group resemble, in all their physical conditions, far more closely the Galapagos Islands than these latter physically resemble the coast of America; yet the aboriginal inhabitants of the 2 groups are totally unlike; those of the Cape de Verde Islands bearing the impress of Africa, as the inhabitants of the Galapagos archipelago are stamped with that of America".

While it seems obvious to us now that this should be the case, one must recall the prevailing views of the time. If all creatures were designed by a creator then surely similar habitats would be home to similar inhabitants. To find 2 locations with such differing species, occupying the same niches suggests that other forces are at play, a view at odds with the religious world from which Darwin came.

More specifically it is clear that when in the Galapagos, the thousand little thoughts and musings he may have had in the past were becoming crystallized into what was described as "the best thought I ever had". Overwhelmed by the evidence present by the creatures of the Galapagos archipelago, Darwin's mind was left with nowhere else to go but in the direction of where it would fulfill its destiny:

"I have not as yet noticed by far the most remarkable feature in the natural history of this archipelago; it is, that the different islands to a considerable extent are inhabited by a different set of beings. My attention was first called to this fact by the Vice-Governor, Mr Lawson, declaring that the tortoises differed from island to island, and that he could with certainty tell from which island any one was brought. I did not for some time pay sufficient attention to this statement, and I had already partially mingled together the collections from 2 of the islands. I never dreamed that islands, about 50 or 60 miles apart, and most of them in sight of each other, formed of precisely the same rocks, placed under a quite similar climate, rising to a nearly equal height, would have been differently tenanted."

Towards the end of the book Darwin, with his sights set on his much-longed for return to England, includes his reflections upon his great voyage. Reading his words, it must be remembered that he had left England as a fresh-faced 22 year old with dreams of voyages to distant lands. He returned 5 years later having gained a wealth of experience, a mountain of scientific data and a world-view vastly different to that with which he set sail. From our modern point of view it is perhaps difficult to imagine the scale of the adventure he had undertaken. But a reading of his reflections can leave no room for doubt:

"Among the scenes which are deeply impressed on my mind, none exceed in sublimity the primeval forests undefaced by the hand of man; whether those of Brazil, where the powers of life are predominant, or those of Tierra del Fuego, where death and decay prevail. Both are temples filled with the varied productions of the God of Nature." 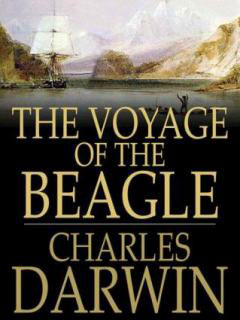 Given the enormity of the implications of Darwin's future work on evolution by natural selection, one must wonder about his reference to "the God of Nature". Is he referring to the view accepted at the time that God is the guiding hand behind all things, that a supernatural being is the force behind nature? Or is this line a tantalizing glimpse of the conclusions that would not emerge, until after many more years of personal torment, regarding the ultimate implications of an evolutionary process? If one reads it as the latter then nature is itself the god, the circumstance where time, change, adaptation and genetic inheritance together result in a world bursting with glorious bio-diversity.

In closing, the warmth and wisdom of Charles Darwin, pervasive elements of 'The Voyage of The Beagle' shine through. Considering the merits of travel and what recommendations he would make to any other naturalist embarking on a similar voyage, Darwin reveals that in addition to his great scientific discoveries, he had indeed learned as much about himself and humanity:

"In a moral point of view, the effect ought to be to teach him good-humored patience, freedom from selfishness, the habit of acting for himself, and of making the best of every occurrence. In short, he ought to partake of the characteristic qualities of sailors. Travelling ought also to teach him distrust; but at the same time he will discover, how many truly kind-hearted people there are with whom he never before had, or ever again will ever have any further communication, who yet are ready to offer him the most disinterested assistance."

And so it was that Charles Darwin again set foot on English soil. He may not have known it at the time, but his voyage had been a momentous occurrence in the history of the world. What would emerge as a result of his experiences, the evidence gathered and the workings of a keen scientific mind would change humankind's view of the world, of nature and of our place in both.

'The Voyage of the Beagle' was published in 1839 and brought Charles Darwin much local success as a travel/science writer. It would not be until 20 years later in 1859 that he would publish 'On the Origin of Species' one of history's most important books and one that would cement his greatness.

... Very helpful with the booking process. Helped to answer any questions we had in a very prompt manner. Service was very personal. Past experience with a different booking agent was so poor that I can't really identify any issues with Dive The World's service ... -- Ian Kerr, USA.  [More customer reviews]