On the Origin of Species

Much can be read into the full title of Charles Darwin's great work, which is 'On the Origin of Species by Means of Natural Selection or the Preservation of Favoured Races in the Struggle for Life'. It is effectively one long argument in support of his theory as to how and why species come about, resulting a huge leap in our understanding of the natural world and our role in it. 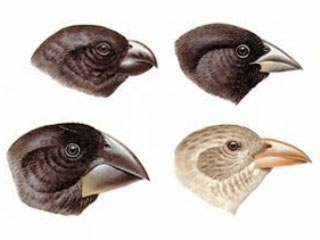 The Galapagos Islands are inextricably linked to Charles Darwin. If you join on a liveaboard charter here you will learn a great deal about Darwin's studies here. There is a Charles Darwin research center in Santa Cruz and his musings on tortoises, finches, marine iguanas and more are quoted everywhere. Had he been trained in scuba, he would undoubtedly have marveled just as much at the amazing abundance and variety of sea-life that can be witnessed when diving Galapagos!

Undoubtedly his travels contributed greatly to his work, but it is easy to overstate the role played by 'The Voyage of the Beagle'. While this may have been instrumental in broadening Darwin's mind and ways of thinking, there was no 'Eureka' moment as he stood on the rocky shores of the Galapagos Islands. We may love the thought of the young Darwin staring at some finch samples on board the Beagle and banging his desk with glee as everything fell into place in his mind.

However the truth is that it took Darwin many more years, deeper study and less glamorous scientific endeavor for his great work to become crystallized into the contents of 'On the Origin of Species'. A humble chalk bank in Kent, England near his home played a role as vital, if not considerably more so, than any of the stops on his exciting voyage on HMS Beagle.

"It is interesting to contemplate an entangled bank, gloved with many plants of many kinds, with birds singing on the bushes, with various insects flitting about, and with worms crawling through the damp earth, and to reflect that these elaborately constructed forms, so different from each other and dependent on each other in so complex a manner, have all been produced by laws acting around us."

In so writing he was unleashing a new view of nature. One is of which man was not made "in the image and likeness of God", but was simply part of the great tree of life. A father of 10 children, 7 of whom survived to adulthood, Darwin saw his human family as part of the mammal family and as an intrinsic part of the living world, and not apart from it. This conclusion was only arrived at following years of painstaking study and inner conflict, and was kept in a private notebook not to be shared with the wider world until the publication of his great work.

"Man in his arrogance thinks of himself as a great work, worthy of the interposition of a deity. More humble, and I believe true, to think him created from animals."

Such declarations were in direct conflict with the prevailing view of Victorian Britain, certainly the clergy and most notably, with the Cambridge professors who had inspired and educated Charles Darwin. How difficult it must have been for him to take a stand against those such as Cambridge Professor of Geology, the Reverend Adam Sedgwick. He was a fervent defender of the idea that the human race was directly created by God and was infinitely higher than merely a product of nature and stated that denying this "might brutalise it and sink the human race into a lower grade of degradation than any into which it has fallen since records tell us of its history." 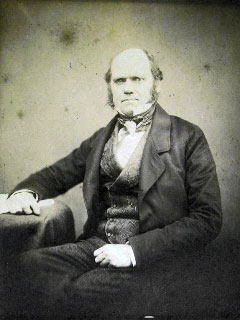 In early 1844 Darwin began to write an essay to prove to those such as Sedgwick that evolution was a reality. How he must have mused over his theories and the difficulties of persuading the men of cloth and tradition to part with old ways of thinking. One can imagine his mental machinations as he walked around 'The Sand Walk', a half kilometer path in the grounds of his house in Downe, Kent, kicking a stone of flint each time to mark his laps.

In the essay he would draw from his notebooks on transmutation. It was in these books that he first drafted the notion that life, in all its variety, must have all evolved from a shared common ancestry, accompanied by rudimentary drawings of the first 'Tree of Life'. The manuscript drew on many sources evidencing Darwin's utilization of a vast intellectual pool of thought including Milton, Erasmus and Lamarck.

It was from the unlikely field of study of economics that the closest thing to Darwin's 'Eureka' moment came. Thomas Malthus's 'An Essay of the Principle of Population' was picked up by Darwin more for amusement than anything else. It argued that, contrary to the thinking at the time, there were limits to the growth of humankind, where exploding populations would run short of food sources.

Darwin took this argument and applied it to nature. Death became a way of explaining life. So it became clear that all the myriad forms of life in the world were competing for food sources and that those with even the smallest advantages over their rivals would be victorious and live, rather than die, passing on their genetic characteristics to subsequent generations. The rest die.

"It at once struck me that favourable variations would be preserved and unfavourable ones destroyed. The result of this would be the formation of new species. Here then, I had at last got a theory by which to work."

Darwin's religious wife, Emma read the manuscript, and realized how it undermined the notion of humans being divinely created, noble, perfect beings. It must have seemed deeply heretical. Her great fear was that espousing such views would mean Darwin's soul would not be saved and that they would be apart for eternity.

When public uproar and outrage followed the publication of the anonymously written 'Vestiges of The Natural History of Creation', Darwin saw the type of reaction his work might receive. He was appalled and immediately realized his manuscript would need much more work to counter the allegations and dismissals of people like Sedgwick. It was a full 40 years later that Scottish journalist, Robert Chambers was identified as the author.

Intensely detailed studies of various species ensued. Darwin studied barnacles for 8 years, discovering how these apparently simple creatures were in fact highly specialized and wondrous animals. Such studies moved him away from the ideas of higher and lower life forms to the idea that all life forms are in some way perfect for the niches they inhabit. His studies also included bees, pigeons, ants and wild flowers.

After the death of his beloved daughter Annie, any lingering tendencies toward religious faith evaporated. "Disbelief crept over me at a very slow rate, but it was at last complete. I indeed hardly see how anyone ought to wish Christianity could be true. For if so, the plain language seems to show that men who do not believe will be everlastingly punished, and this is a damnable doctrine." 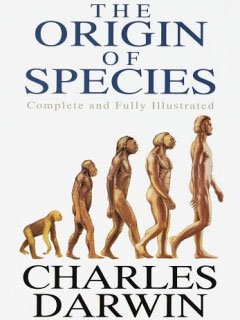 Darwin's slow, ponderous study was suddenly interrupted by the arrival of an unexpected letter from Asia: "My plans were overthrown. For suddenly in the summer of 1858, Mr Wallace who was then in the Malay Archipelago, sent me an essay on the tendency of varieties to depart indefinitely from the original type. And this essay contained exactly the same theory as mine."

Darwin was distraught although he realized his book, with its depth of study and analysis, might prevail where the originality of his idea might not. It was decided that essays by both Charles Darwin and Alfred Russell Wallace would be jointly present to the Linnaean Society in London. Surprisingly the essays caused little stir, but a re-invigorated Darwin was now intent on publishing his book as quickly as possible. This occurred in November 1859.

Years of controversy followed. Darwin and his work were, as expected, pilloried by those with too much vested in opposing points of view, such as the Reverend Sedgwick and others of his ilk. His wife Emma, despite her own personal point of view remained a devoted supporter of her husband. He described it as "his greatest work" and it has never been out of print.

Despite all of the hardships, heartbreaks, illness and worry associated with writing the book, there is a bold and glorious note of triumph in the final paragraph. A sense of hope rises out of understanding the unforgiving brutality of nature, the war of all against all. The hope emerges from the fact that the result is the majesty and beauty of the living world we see around us. All life today is victorious in the brutal war within nature.

"There is grandeur in this view of life, with its several powers, having been originally breathed into a few forms or into one; and that, whilst this planet has gone cycling on according to the fixed laws of gravity, from so simple a beginning endless forms most beautiful and most wonderful have been, and are being, evolved."

... Easy and quick arrangements that took the hassle out of trying to arrange it all myself. Had a great time, saw schooling hammerheads on the last dive of the trip which was epic! Thanks for helping me organise it all! ... -- Arianne Ford, Australia.  [More customer reviews]