Dinosaurs on the Shore

Endemic to the Galápagos Islands and found throughout the archipelago, marine iguanas are the only true marine lizard in the world.

They are much photographed on rocky shorelines sharing the space with sea lions, crabs, penguins and pelicans. Seeing them either on shore or, if lucky, in the water when on scuba, you are sure to include these iguanas as a highlight of your Galapagos diving trip.

They can grow to more than 1.5m in length and weight up to 13 kg. Marine iguanas are famed for their dining habits, which can include swimming down into the shallows and munching algae off the submerged rocks. 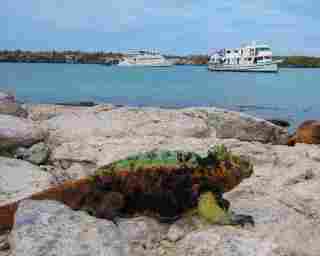 Almost black in colour, marine iguanas have short snouts and sharp powerful claws. Their teeth are protruding and tricuspid, ideal for closely cropping the fast-growing marine algae. Their black colour is useful to assist them with absorbing the sun's energy and is an effective cloak of camouflage among the volcanic rock, particularly for the vulnerable juveniles.

They share the same defence mechanism as geckos in that they can separate part of their tail to assist in escape when being pursued. Sometimes however, due to the thickness of the skin, the tail does not fall off, yet they will immediately begin to grow a new one. So it is not unusual to see a marine iguana with 2 tails, although the old one will eventually wither and fall off.

Most commonly, marine iguanas are seen lounging or moving slowly along rocky shorelines exposed to the sun. They normally lie flat on their stomachs, exposing as much of their skin as possible to the sun's energy-giving rays.

They boast the most effective desalination gland in nature, located behind the nose. This gathers salt which can then be ejected from the body by ejaculating salty water from their nostrils. This appears like a projectile sneeze and is accompanied by a little sneezing sound.

Marine iguanas often find themselves the unwilling toys of playful sea lions who, despite meaning no malice, sometimes cause them serious injury such as spinal breakage.

They can often be seen gathering in large clusters, particularly on cooler evenings. These clusters can mean that piles of iguanas on the shore line can be several creatures deep.

It is the sight of marine iguanas feeding that really catches the imagination. Juveniles and smaller individuals in general do not travel too far from the shore to feed. They prefer to graze on marine algae in rock pools or when exposed at low tide. Larger specimens, particularly big males, can swim through the surf and swell, diving to a depth of more than 10m. Here they cling on to the rocks with their powerful claws and graze the algae.

Although chiefly vegetarian, they will take carnivorous opportunities that present themselves. They sometimes feed on animal matter that comes their way, such as sea lion placenta left on the rocks after a new pup is born. Yummy. Even more delicious is the thought of a hungry iguana munching on sea lion excrement, as they occasionally do. As a visitor to the Galapagos you will soon realise there is no shortage of this foul-smelling delicacy.

Mating and egg-laying take place between January and March, the hottest months. On some islands the males display a deep red and sometimes also a turquoise colouration, displaying their readiness to rumble. Some females also turn red. Fights for dominance over territory (not individual females) are common among male marine iguanas and take the form of exhausting displays of wrestling with interlocking heads, much like fighting stags.

When mating, the male iguana grasps the back of the female's neck in his jaws and pins her down before inseminating her with one of his 2 penises. 5 weeks later the females are ready to lay.

Before laying, females seek out a soft area, normally sand, and they dig a hole for the eggs. Sometimes stronger females have been known to take over nearly completed holes and chase away the poor female who thought her work was almost done. They then lay 1 to 4 eggs. For a while, until the hormones subside, the female marine iguana will her burrow against other females. Some 3 to 4 months later the hatchlings emerge.

Studies reveal approximately only 25% of adult males will breed due to competition. They are very territorial and will protect the territory they won, usually populated by numerous females. Occasionally, a smaller male can sneak in undetected and successfully mate with females without arousing the suspicion of the large alpha male.

Recent records attest to the existence of a hybrid between marine and land iguanas in one place in Galapagos, South Plazas. They tend to live shorter lives and are mostly sterile although some females are believed to have reproduced.

Hatchlings emerge from the sand and instinctively run straight to the rocks where they can be better camouflaged. They will not go swimming until they are older and stronger.

They can live an average of 15 years and reach sexual maturity at around 2 years.

Annually, they shed their skin, a process which takes about 3 months. At the end they are assisted by mocking birds, sally lightfoot crabs and finches that nibble away at the loose edges. The finches are also known to remove ticks, particularly off those iguana populations that live close to human settlements.

They are preyed upon most dramatically by the Galapagos hawk. This master of the air can strike at any time, particularly when the prey is tired or weakened. This is the case when female iguanas are exhausted after digging and laying eggs. Against the sandy area the doomed reptile is completely uncamouflaged, making the hawk's work even easier. Down it will swoop and carry off the unfortunate victim in its talons to be devoured in a location of the hawk's choosing.

The marine iguana's eggs are vulnerable to cats, rats, and pigs on some islands, which root down into the earth to devour the eggs. Other heavier species of animal may cause the nests to collapse and destroy the eggs.

As young hatchlings, on the run to the sanctuary of the dark rocks, they can fall prey to the Galapagos hawk, frigate birds and mocking birds.

They are found throughout the main islands of the Galapagos archipelago, living on shorelines consisting of black volcanic rock.

Changing weather patterns cause disruption to the iguana's main food source, marine algae. Rising water temperature trends and incidents like El Niño can cause a drop in algal growth, which can be crippling to marine iguana populations.

Human impact was keenly felt in one recent incident when there was a petroleum spill in 2005 near San Cristobal. Spillage from the 'Jessica' oil tanker caused huge problems to the marine life. In addition to the primary impact on sea lions, birds and iguanas when in the water, the algae was suffocated. Many iguanas in the surrounding area perished for lack of food in the subsequent days and weeks.

Human population spread in the Galapagos is also a threat to local populations both through loss of habitat and degradation of their food source.

Where to Find Them?

... Dive The World is an excellent agency. Always answer the questions on the emails. Easy ways to pay and reasonable prices. Vic is known by the diving community to be very proactive. You guys are very good! ... -- Ricardo Oliveira, Brazil.  [More customer reviews]