Divers of all kinds just love these fish. Colourful and distinctive, small and delicate, motionless and elongate, they blend in so well with their surroundings that they are near-impossible to find and divers practically drool over sightings.

Pipefish are related to the seahorse and the harlequin ghost pipefish is probably the most beautiful of the family. Other family members include the robust ghostpipefish, banded pipefish and flag-tailed pipe fish.

This strange looking little creature can grow up to 15cm but hard to find as most of them are no bigger than your little finger. They are normally found living around crinoids, featherstars, gorgonian fans and branching black coral bushes. Here they live very well camouflaged by their complex colour patterns and body shape. Key to this effect is the fish's skin flaps, which mimic the 'feathers' of the host crinoid.

Anyone who really wants to find them will have to be very patient and fond of looking at featherstars for long periods or choose a dive centre with skilled divemasters who know where they are. 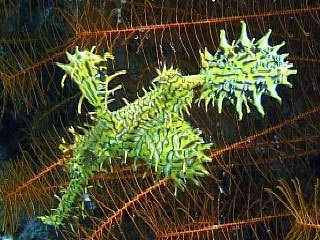 It is further distinguished by the presence of abdominal spinules, additional plates at the dorsal and anal-fin bases and the presence of nasal lamellae filling the nasal cavity of males.

Typical colour patterns include dark red with yellow and orange patches and yellow with lighter spots.

Ornate ghostpipefish are sexually dimorphic (2 distinct forms). The females are an average length of 130 mm; males, on average, are 37% smaller. The main difference between males and females is the presence of a ventral brood pouch in females. This difference is most noticeable in the margins of the pelvic fins which are apposed in females and free in males.

When breeding time comes around, a murky, muddy bottom or a coral reef is the habitat of choice. Here they change not only their colour, but also their shape in order to camouflage themselves even better.

Because they are relatively weak swimmers, rapidly fanning their little fins for propulsion, they tend to stay within very small territories. Even though the fins provide accurate navigation and precise positioning of their bodies, their range is extremely limited.

Harlequin ghostpipefish feed on tiny crustaceans, sucked inside through their long snout.

Ghostpipefish are external skin-brooding species. Embryos are enclosed in an envelope and attached to special epidermal cells called cotylephores. These cells occur only on the inside surface of the pelvic fins of females (the brooders in this species). The pelvic fins of females are expanded and connect to the body and to each other in order to form a brood pouch.

Females carry eggs in this pouch during the incubation period. This method allows the female to move her young to a site that is favourable for survival and also decreases the risk of predation during the developmental stage. It has been estimated that a normal brood size may be as high as 350.

Life as a Harlequin ghost pipefish starts as a larvae adrift on the currents of the oceans. Maturity is gradually reached during this stage, before settling on the sea floor.

At first, the fish will be transparent until it makes its way to the coral reef to reproduce. Here it will take on shape and colour to maximise its camouflage.

The ghostpipefish will take a mate and pair off, a union that can often be observed for days on end. Once fertilized, the female will carry around up to 350 eggs in her brooding pouch. These eggs will eventually be set adrift, restarting the cycle of life once more.

Harlequin ghost pipefish are normally found in shallow tropical and subtropical waters of the Indo-Pacific region, mainly near coral reefs, rocky drop-offs or seaweed beds. They are usually observed in 3-25 metres of water but you can find them to depths of more than 30 metres.

They have been observed at Thailand dive sites such as Richelieu Rock, as well as in the Burma Mergui Archipelago, Indonesia and also throughout Malaysia. They can also be found in the Red Sea, the Maldives, southern Japan, the Marshall Islands, New Guinea, off the east coast of Africa and off the east coast of Australia.

Coral bleaching, pollution and destructive fishing methods all impact on the habitat and the life cycle of the harlequin ghost pipefish.

The aquarium trade also negatively affect their numbers in the wild.

... It was a really GREAT diving trip and my wife and I appreciate your kind coordination for it. I think that the well-organized and informative website was the best part which made me choose you. All the available packages from each dive resort and price list is very helpful to plan the dive trip to Asia ... -- Soo Yong Lee, Korea.  [More customer reviews]