The Devil Firefish or a Turkeyfish?

One of the most photogenic fish you are likely to come across when scuba diving is the lionfish; a fish as beautiful as it is dangerous. Often found lurking in quiet areas of a reef or a wreck, the firefish has a very distinctive striped body, and a series of spines and fins that open up in a magnificent display of flamboyance.

Attractive yet poisonous, sought after but feared, the lionfish is confident in its own abilities and is often one of the first fish species that novice divers come to recognise. Let's learn more about this complex marine character ... 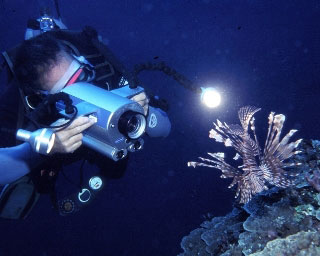 Lionfish can be aggressive, even engaging potential threats with a 'spines forward' approach; they should be treated with caution at all times. Scorpionfishes rank second only to stingrays in the total number of stingings worldwide, with an estimated 40,000 - 50,000 cases annually. Basic treatment includes immersing the afflicted area in hot water (to 45°C). Professional medical attention should be sought in all cases of firefish envenomation.

One should be aware of the numerous different names given to this fish, to avoid thinking that these names refer to a different species. It is alternatively referred to as the red lionfish, zebrafish, devil firefish, dragonfish, butterfly cod, peacock lion fish, scorpion volitans and even the drag-queen fish. They found mostly in the warm waters of the tropical Pacific, from Australia to French Polynesia to South Korea, but they do occur in Indonesia and Malaysia too.

Recent years have seen the common lionfish far beyond its normal habitat, roaming the Gulf Stream, and being the first recorded non-native ocean fish to successfully invade the North American Atlantic. It is not sure how they got there initially but it seems that they somehow made their way from salt water tanks into the ocean, and are living in rather deep water off the North Carolina coast, among other places.

The Indo-Pacific spotfin lionfish, or ragged-finned firefish, (Pterois antennata) bears a close resemblance to (Pterois volitans), but lacks connecting tissue in between the spines of its fin rays. The spotfin's pectoral fins are connected only a short way out from the body, and the dorsal fins are not connected at all. The spotfin has rounded fins coloured white to gold. There are other less obvious differences such as the pectoral ray count, scale shape and numbers of rows of scales, but examining such distinctions are beyond the abilities of the average diver.

The whitefin lionfish (Pterois radiata) has considerably longer spines and fins, which are more ornate. All the spines are lined in white, with solid red membranes between its pectoral fin rays. It also has 2 horizontal white lines at the base of its tail. Its range is Indo-West Pacific - the Red Sea southward to South Africa's Sodwana Bay, and eastward to New Caledonia and Micronesia.

The Japanese or Luna lionfish (Pterois lunulata) has no filaments above its eyes, and it has webbing between its pectoral fin rays covering about 2/3s of the length of the spines. It too is an Indo-Pacific species, from Mauritius to Japan and southwards.

The Hawaiian turkeyfish (Pterois sphex) is endemic to Hawaii, and is a dwarf version of the (Antennata).

Other members of this genus include the plaintail turkeyfish (Pterois russelii), which can be found from East Africa and the Persian Gulf, across to West Australia and New Guinea; the deeper water frillfin lionfish (Pterois mombasae), which has alternate wide and narrow dark body stripes and a dark cheek spot (Indian Ocean to Australia); the clearfin lionfish (Pterois Kodipungi), known only from Indonesia and northern Australia, which has frilled white pectoral ray spines with prominent and distinctive red webbing; and finally the most recently classified (2002) member, the Indian Ocean shortfin lionfish (Pterois brevipectoralis).

For the majority of their adult lives, lionfish are solitary and will fiercely defend their home range against other individuals of both the same or different species, using their poisonous dorsal spines. Males are more aggressive than females.

As their name suggests, they are fearsome predators. Hunting mostly at night, the lion fish will eat just about any crustacean or fish it can catch. Normally sluggish fish, they expend a lot of energy hunting and must therefore eat a considerable amount; so much of this fish's behaviour is dictated by hunger.

Although most of the lionfish's feeding is completed within the first hour of night, it will remain out in the open until daylight. When the sun comes up, they retreat to their shadowy homes among the corals, rocks and overhangs.

They tend to corner prey using their large fins and then use a lightning fast gulp to swallow it whole, much like the gulping attack of a frogfish. It is believed that they usually approach their prey slowly from below, their splayed fins shielding the movement of their caudal fin so that their prey will not be alarmed. Their bizarre striped coloration may be a very useful pattern to disguise it in a reef environment, which also assists in the hunt. However, much like the stripes of the African zebra, the true reason is open to conjecture.

When hunting for crustaceans, they glide over the substrate, vibrating their fin rays to encourage potential prey to emerge from safety.

Lionfish have also been known to adopt an entirely different hunting strategy. They hover in open water just below the surface, watching for schools of small fish jumping out of the water to avoid another predator. As soon as the smaller fish break the surface and re-enter the water, they suddenly find themselves inside the belly of a grateful lionfish.

While courting, a single male will form a group of between 3 and 8 with a number of females, and it will become particularly aggressive. When another male lionfish enters the territory of a courting male, the agitated male will approach the invader with widely spread fins, swimming back and forth, while pointing its poisonous dorsal spines forward. The courting male will charge and bite the intruder violently. Sometimes this clash can lead to either fish becoming impaled, but the action will only stop once the intruder has retreated.

Lionfish need not worry about interpreting body language to know when the time is right for mating, since the physical signals are obvious. The male becomes darker and their stripes are much less visible, and any female whose eggs are ripe takes on a much paler hue with many areas of the body becoming silvery white.

The male will sidle up the female and sit with her on the substrate, looking up at the surface and propped up on his ventral fins. After circling the female several times, he rises to the surface pursued by the now eager female. At the surface she will tremble her pectoral fins, and this rising and sinking process is repeated several times until she spawns and he releases his sperm to fertilise the 4,000 to 30,000 eggs.

They learn quickly and are useful swimmers and hunters of small ciliates within 4 days of conception. The larvae settle out of the water column after a period of approximately 25 to 40 days, at a size of 10-12 mm in length.

Lionfish very quickly bulk up and develop a large body size early in their life cycle. This makes them more likely to avoid attack by predators, and increases the chances of them mating successfully. Depending on species, they live from 5 to 15 years, but the vast majority do perish in the wild very early in life.

Aside from cannibalism of the young, there is not a great deal of information available about what eats lionfish. As yet undocumented predators might include sharks since many sharks are known to consume venomous organisms without suffering any obvious ill effects.

The devil firefish in the Red Sea is known to be preyed upon by cornetfish, which are thought to ambush and consume them from behind. Given the widespread nature of cornetfish, it may be that the local species of cornetfish would prey upon other lionfish species too.

They seem to prefer still waters shielded from current, in quieter and darker parts of reef and wrecks, where they hover almost motionless with their head titled slightly downward. They are also known to exist in bays, estuaries and harbours.

Lionfish populations are healthy and their distribution is growing, thanks mostly to human activity. This is causing some concern in the USA and the Caribbean, where such success of a non-indigenous species must presumably come at the expense of another species.

Possibly the greatest threat posed by man is the threat of a life of captivity, given the popularity of firefish to the aquarium trade. Since there have been no reports of successful captive breeding, the demand for extracting the fish from their natural environment remains high.

You can find lionfish at all of our diving destinations so here's a selection of our finest:


Dive The World Recommendations: Phuket and the Similan Islands in Thailand, Red Sea, Sulawesi and Bali in Indonesia, and the Maldives.

... I've booked with you twice. Everything is always delivered exactly as advertised. I definitely get the feeling of being personally taken care of, and that my trip is important to you ... -- Carol Cohn, USA.  [More customer reviews]