It's only a slug, right?

To those who have never dived, the idea of a small slug-like, bottom-dweller might seem like a boring prospect. However for divers, the picture is rather different. These little, riotously-coloured creatures bejewel the ocean floor, catching the eye like glinting diamonds in the rough.

It is little wonder that so many experienced scuba divers seem to love these unsung animals. With extraordinary colours and so many, varied and striking forms, nudibranchs seem so small and helpless, yet further study can reveal quite the opposite.

While there is always much excited chatter about huge whale sharks and manta rays, the humble nudibranch also has legions of fans who know that every now and again you may be lucky enough to find one that you have never seen before and may never see again.

To date there are over 3,000 known species and more are being found and identified worldwide each day. They each vary in size, colour, patterns and form, but as a general rule you can expect a nudibranch to have an oblong, soft and yielding body and ornate coloration. Yet there are many that have flattened bodies and are not colourful at all, but display the same dull grey or brown as their habitat.

When it comes to the incredible world of nudibranchs, general rules are hard to find. 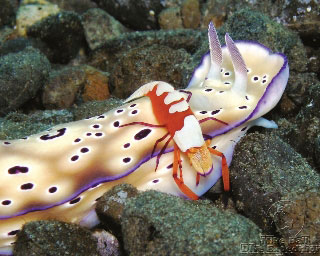 Nudibranchs are gastropod molluscs. They belong to the phylum Mollusca which consists of a large group of soft-bodied animals, usually with a shell, and having a characteristic gill shape. Note the pronunciation ends with a hard 'K' sound as in "noody-brank".

The physical forms of nudibranchs can be vastly different but most commonly they grow to between 4-10 cm in length. They have tentacles on their heads known as rhinophores which can detect taste, touch and smell. Their eyes are roughly a quarter of a millimetre in diameter, set into their bodies and can only deal with light and dark. They have secondary gills which are exposed and take the form of the branchus which sprouts from the dorsal region. 'Nudibranch' literally means 'naked gills'.

Larger species of nudibranch can grow to as much as 60 cm in length and weigh as much as 1.5 kg!

There are many different families of nudibranchs with over 30 in Australia alone. These families can be divided into 2 main types according to their gill structures:

Dorids breathe through gills that are located on their back end. Eolids have outgrowths on the upper surfaces of their bodies called 'cerata'. These appendages increase their body surface area and aid in respiration. Some nudibranchs have cerata that sting and they can also be an effective way of deterring predators. The exceptions are the families Phyllidiidae and Arminidae where instead the gills are secondary structures that are located down the sides between the mantle and the foot.

One of the most famous dorid nudibranchs is the large Spanish Dancer of the Hexabranchidae family which can grow up to 40 cm long. It is so-called because when it swims it makes a gliding motion resembling a flamenco dancers dress.

The Blue Dragon is a classic example of an eolid. Belonging to the Pteraeolidia family it grows to a maximum length of 13 cm, is usually blue and purple in colour and is easily identifiable by the bright purple bands on its rhinophores.

The most common activity for nudibranchs is eating and they dedicate most of their time to it, spending approximately 3-5 hours a day inactive. They are mostly found on the ocean floor and move on a flat, broad muscle called a foot, which leaves a slimy trail. Some can swim short distances by flexing their muscles. They move at a speed of around 10m per day.

Nudibranchs are carnivores and eat sponges, anemones, barnacles and sea slugs and their eggs Occasionally they have been known to feed on members of their own species too. They have a hard, toothed feeding aid called a 'radula' inside their mouth that helps them crush up food items.

Often they are able to take on the colour of their preferred prey, such as brightly coloured sponges, this can also serve as camouflage. Some nudibranchs are solar-powered, storing algae in their outer tissues and living off the sugars produced by the algae's photosynthesis.

'Nudis' have few predators and are at risk only from other nudibranchs, turtles, some crabs and humans. Over years of evolution they have discarded their protective shell and so rely on other forms of protection and defence to deter would-be predators.

One form of protection is camouflage to blend in with the background and avoid detection. Another is to exhibit bright or striking colours as a warning to predators that they are toxic. Some nudibranchs can emit chemical odours to deter predators.

Eolid nudibranchs have developed a stinging strategy that temporarily incapacitates the predator. They can swallow whole the stinging cells located inside an anemone's tentacles and store them in special sacs in the tips of their cerata. These stinging weapons are used to catch food as well as for defence.

Nudibranchs are hermaphroditic which means they have a set of both male and female reproduction organs. However, they cannot fertilise themselves. Mating couples often fight one another over who is the male and who is the female. Once fertilised, they are able to produce up to 1 million eggs which are usually deposited within a gelatinous ribbon-like spiral.

The fertile nudibranch lays the eggs very close to a food source so that the larvae will be able to feed when they emerge. The eggs contain chemical toxins to deter any predators. Once hatched, the growing larva move into deeper water where they develop into the adult form in all aspects except size. Now the nudibranch will continue to grow until it reaches sexual maturity. The average life expectancy is approximately 1 year, however some will only live for a few of weeks.

Nudibranchs can be found in all the world's oceans but they are more common in warm temperate and tropical seas. They can be found at nearly all depths but generally grow to larger sizes in shallow water. Believe it or not, there has been one species of nudibranch called the sea angel found on a dive near the North Pole!

Coral bleaching, pollution and destructive fishing methods all impact on the habitat and the life cycle of the nudibranch. In the sea, they are more or less confined within special micro-environments, providing them with specific food and micro-conditions so they do not handle being held in aquariums; often losing their shape and colour. On a positive note, this protects these fascinating creatures from being fished out for collectors.

The best way to see them is in their natural habitat - the ocean, and the only way to have one at home should be in a photograph.

... Dive The World were prompt with our queries and it was easy to pay via internet banking compared to a few years ago. The website is also very good with a lot of information ... -- Jenny Conway, Australia.  [More customer reviews]