The Wild Man of Borneo...

Playful, intelligent, and sociable, the orang utan is one of the most loved and most threatened of all the large apes. Found only in their natural wild habitat in South East Asia (on the islands of Borneo and Sumatra), they live mostly in the treetops where they build nests.

It seems strange that we should find such fascination in orangutans - who are genetically so close to humans and share many of our characteristics - yet our activity seems certain to cause their extinction in the wild within the next few decades. Deforestation means loss of habitat for these wonderful apes, whose cause for survival has now been taken up by many conservation groups and lovers of wildlife worldwide.

Let's find out more about these loveable primates ... 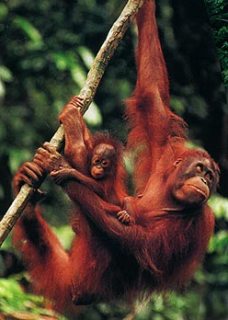 Orangutans have a large tailless body with a thick neck, very long, strong arms, short, bowed legs which are used much like a second pair of arms. Their name has nothing to do with the orange fur covering most of their body: 'Orang' means 'man' and 'Utan' means 'of the forest'. Their similarities to man are many: senses very similar to ours with 4 fingers and an opposable thumb on each hand. However their feet also have an opposable big toe unlike man (except perhaps in Alabama). Their arm span too is beyond man's being 2.3m (7.5 feet). Males weigh around 90 kg (200 lb) and females around 50 kg (110 lb).

Males develop large cheek pads and a laryngeal pouch. The Borneo male has a square-shaped face and much larger cheek pads and pouch than the Sumatran male who has a more diamond shaped face. They have huge, strong jaws and large flat cheek teeth designed for tearing and grinding.

Orangutans spend their lives in the tropical rain forest canopy 7-15 metres above the ground. About 5% of their time is spent on the forest floor and this is usually to move from one group of trees to another or to take a dip in a pool of water.

Their movement through the trees is agile and graceful albeit slow and they have a large range in which they search for food. It is thought that staying high in the trees is a behaviour that was adopted to keep them safe from predators such as tigers and leopards when they roamed the forest in large numbers.

An orang-utan builds 2 nests a day from branches with leaves on them, about 12 to 18 metres above ground. The first nest is a sparse one for taking a short nap while the other is stronger for sleeping the night. New nests are built daily and if there is heavy rain they will make a cover from large palm fronds to keep themselves dry. Babies and juveniles will sleep with their mother in her nest.

Adult orang-utans on the island of Borneo tend to be solitary animals and forage and travel independent of one another. Social relationships are formed by individuals that have regularly overlapping ranges but there is little social interaction between them when they meet. They will usually sit apart and leave alone after eating. Sumatran orangutans, on the other hand, behave more socially toward one another. They will travel together and occasionally bonds will form between low-ranking adult males although male relationships are usually competitive.

An adult male will make a long booming call several times a day that carries over a kilometre through dense forest. It is thought that this call warns other males to stay away. If 2 adult males meet it usually results in a violent and aggressive display or actual fight. They are very vocal and make several different noises besides the long call. One of the most well known is the "kiss-squeak and grumph" sound they make when disturbed. They also make softer sounds to each other that are difficult for humans to hear. Babies and juveniles will whine when they need their mother.

Orang-utans are omnivorous feeding mostly on fruit, seeds, leaves and flowers but are also known to complement this with a few insects, birds and even small mammals. They often wash this down with some rainwater gathered in small pools in the canopy of the rainforest.

Females become sexually mature at the age of 10 and will remain fertile for the next 20 years or more; however they usually don't start reproducing until they are about 15 years of age. Females with infants under 4 years old do not tend to mate. Males become sexually mature at the age of 12 and begin to develop the cheek pads and throat pouches that are so impressive by about the age of 20. It has been observed though, that a young orangutan male's cheek pad growth may be inhibited if there is a dominant male within his sensory range.

A female that is ready to conceive will go in search of the local dominant adult male; this prevents younger males from mating with her. In this situation courtship is cooperative and mating time can vary from a few days on Borneo to several weeks on Sumatra. However, forced copulation also occurs - about 50% of the time in Sumatra and up to 90% of the time in Borneo as there are more lone females on Borneo. Inbreeding is minimised because males tend to emigrate long distances away from their mothers and sisters.

Research has shown that hormone levels in females are strongly influenced by their nutrition. If there is a good supply of fresh fruit, the female's hormone levels increase raising the chances of conception.

After a gestation period of between 8 and 9 months, the female gives birth to a single baby. The average time between births for an adult female orang-utan is 8 years and as a result only 3 or 4 offspring are born during her lifetime.

A baby weighs about 1.5 kg at birth and is unable to do anything for itself. Its mother will carry the infant orangutan continuously for the first year and it will sleep in its mother's nest until it is weaned at about 3 years old. An will remain with its mother for an average of 8 years while it learns to navigate through the dense forest and forage for food. Adolescents become completely independent by the age of 10.

In captivity Orang-utans can expect to make it to 50 years of age or more but in the more testing and perilous conditions of the wild their life span ranges between 30 to 45 years - most skeletons found in the jungle display evidence of bone fractures and breakages from falls.

Orangutans are Asia's only great ape and live in the tropical rain forests in northern Sumatra, Indonesia and in the forests of Borneo - both in Sabah, Malaysia and Kalimantan, Indonesia.

Although these 2 groupings of Borneo and Sumatra have evolved separately, they are not separate sub-species. They may be distinct from each other but are still capable of interbreeding.

Predation is not really the issue for the orangutan - unless you consider man blindly and rapidly destroying their habitat to be predation. In 1900, there were somewhere in the region of 315,000 orang utans. Now, fewer than 50,000 are believed to still be living in the wild. What is worse is that many of them are divided into small, pockets of population. This means many of these groups are already not biologically viable and therefore have no chance in the long term.

If you take a flight over Sabah for much of the time the landscape below what was once dense Borneo rainforest is now acres and acres of palm oil plantations. Local businesses have been keen to use the land for producing palm oil primarily for cooking and cosmetic use. Now, with palm oil based bio-diesel being potentially the next generation of fuel for an energy hungry world, expansion seems to be everyone's agenda with potentially catastrophic consequences for orangutans which need the rainforest habitat for survival.

Some statistics suggest that within the next 10 years the only habitat that will be remaining will be in the forests of Kalimantan, Indonesian Borneo - an area which will doubtless also be fully plundered for its natural resources. Indeed Indonesia has recently announced plans to create the world's third largest plantation there.

Logging is also an obvious threat with illegal logging taking place in areas where the removal of the habitat spells doom for the orang-utan as well as innumerable other species of plants, insects, mammals and birds. Hunting, forest fires and the illegal pet trade also contribute to their unhappy lot and as females only produce 3 or 4 offspring in their lifetime any loss impacts the species as a whole, with devastating effects.

Orangutan conservation efforts are growing due to the increasingly desperate plight of the animals. At this rate we will be lucky if we end up with any orang-utans at all in a couple of decades. Even then, this will probably be a small group of captive apes whose only future is to see out their days like living fossils of a once great and plentiful creature.

Educate yourself as to how much palm oil you consume - you will be amazed. Find out what contains palm oil and what action is needed to ensure the public are better informed as to what their purchases in the supermarket mean for the environment.

Act responsibly, and when purchasing wood and wooden items, look out for the FSC stamp. The Forest Stewardship Council has developed an international labelling system upon which you can rely as a guarantee that the product comes from a well-managed resource.

Update - September 2016: A new IUCN Red List has seen the orangutan's status amended to 'Critically Endangered', one step from extinction.

would like to hear from you. They are a UK based Non-Governmental Organisation (NGO) working as the only authorised NGO with the Sepilok centre.

Pay Them a Visit

You can contribute by visiting the Sepilok Orang-utan Rehabilitation Centre in Malaysia where you can witness orangutans recently released back into the wild but still being fed regularly as they progress from captive patients to healthy animals living in the wild. Many Dive The World customers include this in their diving visit to the state whether to dive in Sipadan, Lankayan or Layang Layang. This centre, the biggest and first of its kind, may ultimately be their only hope for survival and your contributions (entry fee, donations, adoption programme) can help.

You can stay at the delightful Sepilok Nature Resort to enjoy this encounter.

... Everything was perfect, we had great time. The best parts of Dve The World's service are: fast answers to all requests, excellent communication skills and a high value for money ratio. Ciao Beef, hope to have other diving holidays with you and Dive The World!!! ... -- Andrea Urgolo, Italy.  [More customer reviews]