You have probably seen them before and not doubt been warned of the dangers they pose when protecting their young but how much do you know about trigger fish? Find out more about this common reef inhabitant and understand why it has torn off a few ears over the years and caused so many bruises - is it just misunderstood? The titan triggerfish is a beautiful and robust reef creature just waiting to be discovered ...

Known scientifically as Balistoides Viridescens, these solitary creatures have been known to attack divers and inflict serious injury. Luckier divers return with holes in their fins (the fish seems attracted to colourful fins, which actually reduces the risk of personal injury) while more misfortunate divers have been knocked out cold or suffered from bite wounds requiring medical attention.

Regularly spotted at the Phuket islands such as Racha Yai and certainly one of the more antagonistic species of fish found in Thai waters, titan triggerfish are not known as a diver's best friend. However, despite looking quite mean with their beady, swivelling eyes, they're quite easy to deal with, with the right approach.

Why the aggressive behaviour, one might wonder? Hard to say. While some triggerfish are merely reacting to what they perceive as threats to their nesting grounds - definitely a lesson for divers to respect the habitat of these fish - others seem to do so for the fun of it. This much is clear - titan triggerfish are extremely territorial by nature. The male stands guard over its nest and will charge at any divers or fish that cross into its territory (the zone in a full circle directly above its nest.

Bites should be taken seriously as they are ciguatoxic. Ciguatoxin is a natural poison which is found on some tropical reefs. It infects fish which feed on marine algae. While harmless to the fish, even small amounts can have a harmful effect on humans. In cases of extreme poisoning, it may cause heart attacks, paralysis or death. 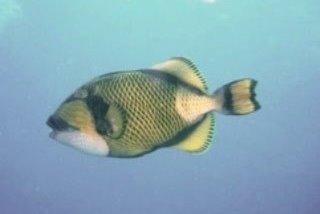 The balistoids are laterally compressed, generally rhomboid shaped fishes, although a few species such as the clown triggerfish, are slightly elongated. They have a non-protrusible upper jaw, with hard, specialised teeth that in most species are designed for cracking the shells of various hard-shelled invertebrates.

Its body is heavily scaled and is generally green to dark grey in colour, with yellow or green fins with black tips, and a lower jaw, dark grey or purple in colour. In Thailand, the fish are predominantly yellow in colour.

They have independently rotating eyes, and their pelvic fins are fused into a single spine. They have 2 dorsal fins, the first of which is comprised of 3 spines, and this is where the trigger fish derives its name. They can use this spine, along with the ventral spine, to lock themselves into coral heads or rock crevices when threatened, and once they do they are immovable!

Titans are also known as the "Black-tipped" or "Moustached Triggerfish" due to their appearance - they have dark markings above the mouth which look like a moustache - and black edgings on their fins.

Its snout comprises about a third of its total length and its mouth is small with chisel-like teeth. Titan triggerfish can accelerate for short distances at a fairly surprising speeds. They can generally be found in the Indian Ocean and central Pacific at depths of around 10 to 30 metres.

It is the largest member of its family. Most grow 40 - 60cm in length, although there have been reports of larger ones up to 75cm lurking around as well.

Titan triggerfish are often solitary, and diurnal, meaning they are day-time fish, sleeping at night.

The nest of the titan triggerfish is usually in a flat sandy area amongst the corals, an area that it will defend with a passion. Mating season is a particularly aggressive time during which the trigger fish becomes even more territorial than usual. The teeth, designed for crunching through hard shells and coral, can inflict serious wounds on any would-be intruders.

Titan triggerfish won't always resort to violence though, on occasion just swimming at the intruder, usually a diver or snorkeller, to provide them with an escort out of the nesting territory. However, should a colourful male titan happen to charge in your direction, it's best to do away with bravado and retreat, using your fins as a barrier between you and the fish.

Their territory extends upwards in the shape of a cone, which means acceding will put you further into its territory, making a horizontal swim away from the nesting area the best escape route.

Its body is heavily scaled and is generally green to dark grey in colour, with yellow or green fins with black tips, and a lower jaw, dark grey or purple in colour. In Thailand, the fish are predominantly yellow in colour.

Due to this intrusive style of feeding, titan triggerfish often have smaller fish groupies hanging about picking off left overs from successful kills and other scraps dislodged by their thrashing about.

The triggerfish search for mating partners and are known to do mating dances with the chosen one. Both will vigorously protect the nesting area.

Sexually distinctive, the titan triggerfish will lay eggs that are fertilised externally. Eggs are laid after some preparation of the nest. They create a depression in the sand of the chosen nesting area by fanning it with their caudal and dorsal fins.

Although nesting or not, the male is usually aggressive and can attack unprovoked; a female guarding her nest can be equally aggressive. They will deftly defend the nest even against intruders much bigger than themselves.

Titan triggerfish spawn for about 4 days a month. The male will guard the nest and blow water over the eggs, ensuring a good supply of fresh water and oxygen. Once the larvae hatch they will swim away, presumably into the protection afforded by the coral reef.

Early on in the life cycle, zooplankton will be the source of nourishment until such time as the juvenile has matured enough to take on other delicacies of the coral reef.

Although not much is known about what in particular preys on titans, one thing is for sure, they can defend themselves quite well.

At night or when threatened, the fish will wedge itself into a coral crevasse and erect its dorsal fin wedging itself in tight. The first spine is locked in place by the second spine and once that's in place, the fish is virtually immovable, resulting in the titan trigger fish not being considered an easy meal.

Not a pelagic species, titans general stick to the flatter parts of reefs.

More detailed information on diving destinations where you can find these fish:

... Dive The World provides a good method of communicating with the dive resorts, getting clients the information they want and the price is very competitive. For diving in SE Asia they are the best source of info that I know of ... -- Randy Wacker, Canada.  [More customer reviews]