The Most Beautiful Fish in the Sea?

One of the most colourful fish to encounter when diving, clown triggerfish make for an excellent photo opportunity. Unfortunately they are quite camera shy and are exceptionally good at turning their backs or moving away just as you are about to press the shutter!

It's worth persevering though as their colours and impossible-patterned markings really do illustrate just how creative nature can be. These marine creatures are very aptly named the 'Clowns' of the triggerfish family. 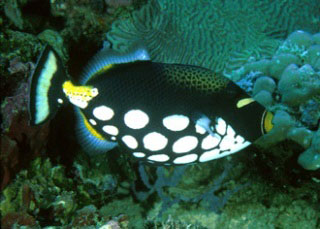 Trigger fish belong to the order Tetradontiformes '4-tooth bearing', and the family Balistidae, and are closely related to 9 other families, including cowfishes, filefishes, puffers and leatherjackets among others.

As implied by its scientific name, Balistoides conspicillum (Bloch & Schneider, 1801), the Clown triggerfish has fantastic colouration, making this species instantly recognisable when seen. The lower half of the body is dark with large white spots with the upper half, below and around its dorsal fin, being yellow with small black freckles. The eyes are generally masked with a white or yellow stripe crossing over the snout. The mouth of the clown trigger fish is bright yellow with a white line behind it.

Juvenile clown triggerfish have white spots on the upper half of the body as well as the lower, but these fade away as they reach maturity. However unlike the adults, the juveniles are rarely seen because of their cryptic habit of hiding in caves and crevices on the reef, so catching sight of a juvenile is a lucky occurrence.

These colourful triggerfish hide in crevices when in danger and, although normally not shy of scuba divers, they will retreat if you get too close. They are normally seen singularly and occasionally in pairs, and are fairly rare throughout their range.

Clown triggerfish feed upon crustaceans and mollusks by crushing them with powerful teeth. They are voracious eaters, and divers have reported seeing them devour beds of pearl oysters. They are also not averse to dragging large bits of coral out their way if they think that there is a particularly tasty morsel to be had.

When it's time for spawning, most triggerfish dig a shallow crater in the sand, where the female deposits the eggs. Both sexes can guard the nest until the eggs hatch and the larvae float away.

Should you see one circling a spot on the sand, chasing other fishes that approach this location and blowing jets of water at the spot, it is likely that the fish is guarding a nest there. Steer well clear of these nest guarders, as they are particularly aggressive, and have no hesitation in attacking and biting scuba divers.

Their territory is an inverted cone shape above the nest so remember to swim outwards rather than upwards if you need to take evasive action. This aggressive behaviour is not nearly as common with clown triggerfish as it is with titan triggerfish that regularly chase divers away from their nest areas, often snapping at his or her retreating fins.

Most of these fish reach an average size of 6 inches in length in an aquarium, and in the wild they grow to an adult size of 50 cm.

Just like most other fish on the reef, the clown triggerfish needs to be alert for larger marine life higher up the food chain, such as jacks and tuna.

The clown trigger fish can be found in the tropical and temperate waters of the Indo-West Pacific region, from South Africa (south to Aliwal Shoal) to the islands of the central Pacific Ocean.

They inhabit the inner and outer portions of a reef, wherever shellfish and other invertebrates are found, in depths ranging from the shallows down to 75 metres. They are mostly seen swimming openly near steep drop offs although occasionally you will see them in the shallower areas of the reefs.

The main threat to clown triggerfish is the marine aquarium trade that take them in large numbers to satisfy the demand for 'reef' aquariums. Unfortunately as juveniles they do not respond well to this and there is a high mortality rate leading to the aquarium suppliers taking larger numbers to cover this loss.

They are a ciguatoxic fish and are therefore rarely eaten by man.

These fish can be found at most of our destinations, so here we have selected just a few that offer the best probability of encounters:

... Dive The World service was good. We had some internal issues trying to decide on resorts and by the time we had made a decision, our preferred resort was not available. We were given a discount on our second choice which was positive. Quick response to questions when asked. Not many weaknesses ... -- Don and Liz Halina, Canada.  [More customer reviews]