Apex Predators of the Reef

Trevally are among the more common fish encountered by divers, in a variety of species. These powerful silvery predators patrol the reefs and are often seen preying on smaller fish, making exciting, sudden dashes around the reef and thrilling any on-looking scuba divers.

You can be gently finning alongside a colourful wall and then see a trevally or two swimming just off the reef. Then, in a flash of bright silver they will hurtle into a school of small reef fish and, almost as quickly, retreat into the blue with a tasty snack firmly secured in their jaws.

There are many species that you may encounter on scuba including giant, silver, gold-spotted, banded, blue, thicklip, black, bluefin, bigeye, golden, sand and diamond trevally. Trevallies belong to the jack family, Carangidae, which also includes pompanos, runners, amberjacks, pilotfish, jack mackerels and scads. 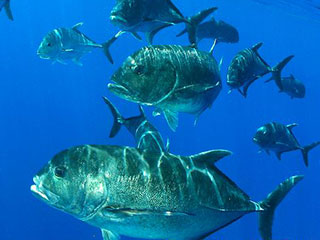 Giant trevallies are the largest of the genus, with some individuals reaching 170 cm in length, with a weight of 80 kg!

Golden trevallies can reach 120 cm in length, up to 15 kg, and they have a defining feature in their mouths: they are highly protractile and have no teeth. Juveniles show a bright yellow colour with vertical black crossbars all over their body. These bars generally alternate between broad and narrow.

Trevallies are powerful predatory fishes, usually more active during the day than at night. However this is site-dependent. In South Africa, for instance, they are more active at night. They can hunt as solitary individuals or in groups.

Trevallies also show different hunting techniques, from aggressive attacks to reef ambushes, and even foraging on chunks of prey left by larger predators.

Nature has gifted them with superior swimming abilities and power that they use when hunting prey. If the prey has not been killed by the first strike, they are then usually killed by the strike impact itself. The prey is eaten quickly as there is high competition with other specimens hunting together. Some species hunt individually (e.g. the giant trevally) but some also in schools, which increases efficiency. Group hunting seems to be a disadvantage only when single prey are present and close to the reef.

They usually target small fish, but also fusiliers and juvenile turtles have been found within the stomach of larger trevallies. Crustaceans and molluscs are also part of their diet.

Trevallies are threatened only by some tropical shark species and by humans. Most species don't have a commercial value in Western countries, but they do get caught and have value in third world countries and island nations.

They are also often targetted for recreational fishing. The giant trevally in particular is often killed to become a trophy on display.

Mature trevallies of both sexes gather around the offshore reefs during the spawning season, which generally lasts for about 4 months per year. Spawning events take place at specific stages of the lunar cycle.

They gather near the sea floor in vast schools of more than 1,000. Coloration changes mean 1 silver female is chased by 4 darker male would-be suitors until a pair sink to the sandy bottom where eggs and sperm are released.

The pair then swim away before rejoining the school with the males reverting to their silver colouring. The eggs are left to their pelagic destiny.

Trevally larvae are able to swim against a current when they measure 7-14 mm and feed on zooplankton while swimming. They avoid reefs and live pelagically, using jellyfish and other floating objects as protection. Some species are known to prefer estuarine conditions and various species are known to have a wide salinity tolerance.

In Asia, trevallies are common in the waters of India, Maldives and throughout south east Asia. They have been recorded as far north as Hong Kong, Taiwan and Japan, and as far south as the northern tip of New Zealand. In the Western Pacific, they have been found in Tonga, Polynesia and Hawaii.

Trevallies have only a few enemies under the water, but are threatened daily by humans, from both recreational fishing in tropical and sub-tropical waters and in some countries from commercial fishing. They are usually eaten fresh but can also be frozen up to 3 months.

Juvenile golden trevallies are used in marine aquaria, due to their bright yellow and black stripe coloration. Climate change, water pollution and reef destruction are also dangers, not only for these species but for all underwater creatures.

More detailed information on diving destinations for encounters with these mighty predators:


Dive The World Recommendations: Sipadan Island, the Maldives, Komodo and the Similan Islands.

... The information is excellent, very comprehensive. The booking process was very efficient, therefore no suggestions on how to improve. Dive The World staff replied quickly and concisely to all enquiries. ... -- Tim Pickering, Australia.  [More customer reviews]