The wobbegong! A quite rare form of shark whose name is believed to come from the aboriginal word for a shaggy beard, after the tasselled appearance of the species found in the western Pacific

There are 3 genus: Eucrossorhinus, Orectolobus and Sutorectus comprising 12 species, also known as carpet sharks. The most frequently sighted species include the following common names: tasselled (on which this article focusses), spotted, Japanese, ornate, Northern, Western, and cobbler wobbegongs. But these are quite rare animals, seen in only a small number of diving destinations.

These ornate, bottom-dwelling sharks are far removed from the usual idea of what a shark represents. Very little about how they look, live and feed is shark-like. So what are they and where can I scuba dive with wobbegongs? 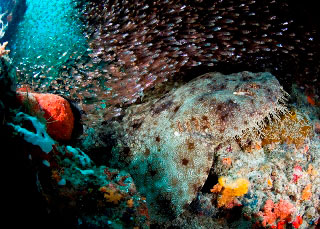 The wobbegong’s body is not sleek and powerful as with most sharks. Instead it is flat and wide with splotches of coloration providing a camouflage effect. They also have highly branched dermal lobes and whisker-like barbels around the mouth. They are difficult to spot on the ocean floor where they spend most of their time.

The wobbegong’s normal habitats include sandy bottoms, seagrass beds and coral reefs. In the daytime, these nocturnal sharks secret themselves under ledges in the reef and rocks. Small local movements over the reef appear like a clambering motion using their bottom fins and they have even been known to wriggle out of the water completely.

Wobbegongs are not considered dangerous to humans, but they will attack if provoked intentionally or otherwise. If stood upon or having their tail grabbed, they may bite in a sudden and fierce manner. They are very flexible and can easily whip around to snap at any hand that touches their tail. Not only can they bite hard and severely, but they cling on and can be very difficult to dislodge, making the experience torturous for the owner of the trapped limb.

Their hunting style is very unusual for a shark. It perches somewhere on the reef at night and will lie motionless, camouflaged against the substrate. When prey strays within range it will lunge up and attack using its large jaws and sharp teeth.

Their diet consists of smaller fish, octopus, crab, small or juvenile sharks, and lobster. Nocturnal fishes that share their caves such as sweepers, soldierfish and squirrelfish are known prey items of the tasselled wobbegong.

Daytime periods of inactivity for the nocturnal tasselled wobbegong are relatively safe. Since they are very flat-bodied, they can hide under low shelves which offer them protection from predation.

Exposed when hunting at night in the open, they can fall prey to other sharks, large reef fish and marine mammals.

Female wobbegongs are ovoviviparous, meaning they produce eggs but do not lay them. The eggs remain within the female’s body until the young hatch.

The pups, as many as 20 or more in one litter, are then born live. Very little is known about their lifespan in the wild.

Wobbegongs do not enjoy worldwide distribution but are limited to the tropical and temperate waters of the Pacific Ocean and the eastern Indian Ocean. They are most frequently spotted around Australia and Indonesia. Specifically, the tasselled wobbegong can be sighted in the western Pacific Ocean off eastern Indonesia (Waigeo, Aru), Papua New Guinea, and northern Australia including Barrow Island off Western Australia, the Northern Territory and northern Queensland. It is often observed residing in the northern Great Barrier Reef off the coast of Australia.

Unsurprisingly the Japanese wobbegong (Orectolobus japonicas) occurs as far north as the waters of Japan.

Wobbegongs are on the IUCN’s Near Threatened list. Dangers posed to the species come chiefly from a limited distribution range and habitat destruction caused by destructive fishing practices. They are also in danger of being bycatch.

In Australia the flesh of wobbegongs (and other sharks) is called flake and often sold as the fish in 'fish and chips'. Their tough skin has also been fashioned into a form of leather.

... Excellent and efficient booking process - the Dive The World staff are very responsive!! Dive The World makes it easy to search for dive excursions around the world by geographic region. It is very convenient to compare live aboards and plan trips accordingly. ... -- Robert Kottmann, USA.  [More customer reviews]