Your Guide to Diving in Phuket Newsletter

Regularly spotted at the Phuket diving islands such as Racha Yai and certainly one of the more antagonistic species of fish found in Thai waters, titan triggerfish are not known as a diver's best friend. However, despite looking quite mean with their beady, swivelling eyes, they're quite easy to deal with, with the right approach.

Known scientifically as Balistoides Viridescens, these solitary creatures have been known to attack divers and inflict serious injury. Luckier divers return with holes in their fins (the fish seems attracted to colourful fins, which actually reduces the risk of personal injury) while more misfortunate divers have been knocked out cold or suffered from bite wounds requiring medical attention. 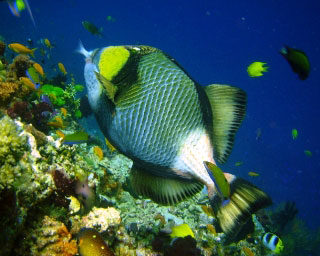 Why the aggressive behaviour, one might wonder? Hard to say. While some Triggerfish are merely reacting to what they perceive as threats to their nesting grounds - definitely a lesson for divers to respect the habitat of these fish - others seem to do so for the fun of it. This much is clear - that they are extremely territorial by nature. The male stands guard over its nest and will charge at any divers or fish that cross into its territory (the zone in a full circle directly above its nest.

Bites should be taken seriously as they are ciguatoxic. Ciguatoxin is a natural poison which is found on some tropical reefs. It infects fish which feed on marine algae. While harmless to the fish, even small amounts can have a harmful effect on humans. In cases of extreme poisoning, it may cause heart attacks, paralysis or death.

Titan triggerfish are also known as the "Blacktipped Triggerfish" or "Moustached Triggerfish" due to its appearance - it has dark markings above the mouth which looks like a moustache - and black edgings on its fins.

Its snout comprises about 1/3 of its total length and its mouth is small with chisel-like teeth. It can accelerate for short distances at a fairly surprising speed. They can generally be found in the Andaman Sea at depths of around 12 metres.

Its body colour is generally green to dark grey, with yellow or green fins with black tips, and a lower jaw, dark grey or purple in colour. In Thailand, the fish are predominantly yellow in colour.

Most grow 40 - 60 cm in length, although there have been reports of larger ones lurking around as well.

While they may enjoy taking a nibble out of divers, titan triggerfish tend to feed on hard corals, hard bodied benthic invertebrates and algae.

... Thanks for making our vacation so easy. I am already looking into our next trip and expect that you will be hearing from me again ... -- Lisa Yogiinka, China.  [More customer reviews]