Your Guide to Diving in Thailand Newsletter

There are few sights more awe inspiring for scuba divers than watching manta rays performing their graceful somersaults. These magnificent creatures are frequently seen feeding alone or in small groups near the surface at Thailand scuba diving sites such as Koh Bon, near the Similan Islands, Komodo in Indonesia, and other near shore waters near coral and rocky reefs.

They are capable of rapid speed and juveniles sometimes leap well clear of the water, landing with a loud slap, sometimes performing 2 or 3 of these jumps in succession. The act seems to be playing or social behaviour - the great, crashing splash of their re-entries can often be heard from miles away. Getting rid of parasites may also play a role, much like breeching whales.

Manta rays are strong pelagic swimmers, possibly able to cross the open ocean and so often host one or more clinging remora, or sucker fish. Remoras have their first dorsal fin modified into a sucking disc. While the remoras do not harm their host directly (apart from sore skin where attached), the manta does use more energy in swimming.

Seemingly inquisitive, manta rays sometimes approach and even solicit attention from divers, apparently enjoying the tactile stimulation provided by human contact as well as the bubbles from scuba units. In areas frequented by divers, however, mantas often become very wary and cease to approach. When approached rapidly or grasped, manta rays roll onto their backs, dive, or swim away rapidly, righting themselves only when some distance away.

Here are a few simple rules to increase your enjoyment and protect mantas from injury: 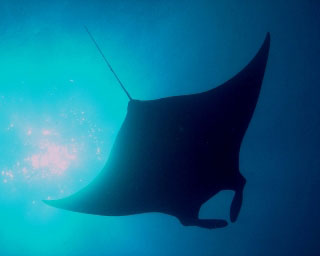 Manta rays grow to 6.7m wide, weigh up to 1,400kg, and are the largest of all rays. The Spanish word for blanket is manta and aptly describes the unique spherical body shape of this animal. Also known as "devil rays" with graceful pectoral 'wings', manta rays are easily recognised by their paddle-like cephalic lobes projecting forward from the front of the head (actually extensions of the pectoral fins, supported by radial cartilages), and a very broad, rectangular terminal mouth.

Mantas vary in colour from black, grey-blue, to red-brown on the upper surface of their cartilage body, sometimes with white shoulder patches and blotches, and almost pure white on the lower surface of their pectoral fins and body disc. Their body patterns show individual variation and helps identify individuals. There are also regional differences in manta ray colour patterns. For example, specimens from the eastern Pacific often feature dusky to mostly black undersurfaces, while those from the western Pacific are typically snow white underneath.

Although it's difficult not to recognise an adult manta ray, juveniles are similar to mobula rays (of which there are 9 species) that grow to 3 metres and share paddle-shaped cephalic lobes and gracefully curved pectoral wings. Mantas, now thought to be a single species, and mobulas are most readily distinguished by the position of the mouth - mantas have terminal mouths (located at the front of the head), whilst mobulas have sub-terminal mouths (located underneath the head, similar to many sharks).

Even though manta rays have up to 300 rows of small peg shaped teeth (the size of pin heads) only on the lower jaw, they really are gigantic filter-feeders, preying on planktonic crustaceans and small schooling bony fishes. The 2 fleshy lobes of cephalic fins are unrolled and held at a downward angle to create a funnel guiding prey into their enormous mouth. Feeding often occurs near or at the surface where plankton accumulates.

Manta rays are ovoviviparous with a usual litter size of 2 - each pup wrapped in a thin-shell that hatches inside the mother, later to be born alive. Birth occurs in relatively shallow water, where the young remain for several years before expanding their range further offshore. Like sharks and other rays, mantas are fertilized internally. Male manta rays have a pair of penis-like organs called claspers, along the inner part of their pelvic fins. During courtship, male mantas chase the female, eventually one grasping the tip of one of her pectoral wings between his teeth, and pressing his belly against hers. Then, the male flexes one of his claspers and inserts it into her vent. Copulation lasts about 90 seconds. The fertilized eggs develop inside a mother manta's body for an unknown length of time that may exceed 12 months.

Newborn manta rays are about 125cm wide and growth is rapid, doubling in size during the first year of life. Male mantas mature when they reach a size of about 4 metres, females at about 5 metres; it is unknown what age this is. Likewise, it is not known how long manta rays live, but best guesses are about 25 years.

Only large warm water sharks, such as the tiger shark are known to prey naturally upon manta rays.

A Devil of a Peril

Found in every tropical ocean, the great manta ray stands apart as the largest of all rays; but just as mantas are obtaining star status with scuba divers, promising increased eco-tourism revenues, their populations around the globe are in peril. 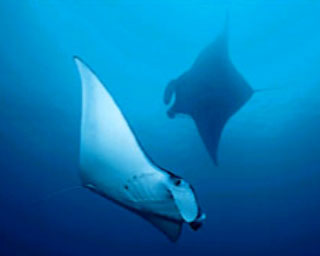 The harvest of manta rays in eastern Indonesia has increased exponentially in just a few years. It has been estimated that over 1,500 mantas have been taken over a period of 6 months. In the Philippines, increasing pressure on local fisheries has forced fishermen to look to the manta as an alternative meat source. Another factor leading to increased harvests of mantas is the new demand for brachial gill plates which are used in traditional Chinese medicine. Its skin has also been exploited for such as wallets and handbags. Overall this represents a 10-fold increase in farming over historic levels and it is feared that this increased manta ray harvest will spread to the Western Pacific.

In the Philippines fishermen are licensed to catch mantas using one-kilometre-long drift nets about 30m in height. These nets also catch dolphins and endangered turtles, which are being marketed as shark meat. This overexploitation of manta populations, together with low birth rates and small litters leaves manta rays highly vulnerable.

When it was discovered that entire populations of whale shark and manta ray had been decimated in the Philippines, a ban prohibiting the harvesting of mantas was imposed in 1998. But this was short-lived. 4 years later, due to the lack of resources to implement a sustainable management system, and political pressures from fisherman, the ban was lifted.

A delicate balance exists between the economic well being of small fishing villages, demand for Chinese medicine and the protection of mantas. Helping local groups protect ecosystems that are frequented by mantas for tourism may be the only viable solution. Conservation efforts need to work internationally and with local communities to protect the majestic manta ray.

... Ease of booking and costs could be settled quickly and efficiently. Nice website and good info on both the resorts and dive sites ... -- Bristi Basu, England.  [More customer reviews]