Many asthmatics want to dive, but unfortunately, there are a number of concerns about the effect of asthma on dive safety. Dive physicians have traditionally taken a very conservative approach to asthma in dive fitness assessments. Mention of the word "Asthma" and potential divers were ejected from the surgery faster than you could say, "but it wasn't serious and it's gone away now"

More recently, some dive physicians have begun to take a more liberal, informed consent approach in assessing previous or mild asthmatics for diving. Some ex-sufferers previously prevented from diving can now dive, after making an informed choice about the possible risks. 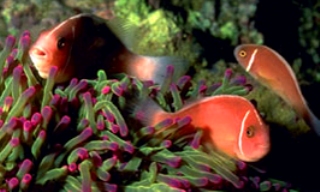 Asthma is a condition affecting medium to small airways in the lungs. In asthmatics, these airways are prone to narrowing, which impedes the flow of air into and, in particular, out of the small air sacs (alveoli) where gas exchange occurs.

The trigger for these events is often an allergic response to a specific stimulus, Some asthmatics also respond to physical stimuli such as exercise or a change from breathing warm air to cold air.

The result is that the patient feels short of breath and there may be an audible wheeze due to airway narrowing which can cause severe breathing difficulty, and asthma attacks can certainly be fatal.

Problems with Asthma in Diving

There are 3 main concerns about asthma and diving:

First, asthma may make divers more likely to suffer a dive-related illness. We are all taught that the most important rule in diving is to breathe normally and to never hold your breath. If a diver ascends while holding his breath, the expanding air can damage delicate lung tissue, and air may be introduced directly into the blood, travel to the brain and cause an arterial gas embolism (AGE). There is concern that an asthmatic may suffer narrowing or blocking of small airways during a dive, and that expansion of any trapped air during ascent may lead to the same problem. There is also concern that use of reliever medication, such as Ventolin, prior to diving may cause the lungs to be less efficient at filtering out the venous nitrogen bubbles we all have after dives. These bubbles may then circulate through the lungs and reach arteries where they might, in theory, be more likely to contribute to the development of decompression illness.

Second, it is recognised that an asthma attack in the water may severely compromise the diver's safety by incapacitating him and causing an inability to function effectively. Indeed, it is hard to argue that difficulty breathing would not be a decided disadvantage if you were caught in a current that was sweeping you away from your boat.

Third, it is a plausible concern that diving itself could precipitate asthma. Asthma can be precipitated by the exercise associated with diving, or by the irritant effect of breathing a cold, dry gas. It is also recognised that regulators frequently leak a little salt water, and that some of this may be nebulised into a mist during breathing. This mist can irritate the airways and precipitate narrowing in vulnerable individuals.

The problem with all these very plausible concerns is that we have no idea how truly significant they are as there has been very little historic research. There is some data from retrospective surveys and these reveal many asthmatics (including active asthmatics) do dive, and that while their relative risk in diving may be more, their absolute risk remains reasonably low. e.g. 1 survey indicated that asthmatic is twice as likely to suffer an AGE as a non-asthmatic. Sound bad? Maybe. But if the risk of AGE for a non-asthmatic is 1 in every 50,000 dives, then the risk for an asthmatic is 1 in 25,000; a clear illustration of the fact that not very much multiplied by 2 is still not very much.

Assessing Suitability of Asthmatics for Diving

In this day and age where people do not want to take responsibility for their own actions, the most prudent thing for a dive physician to do when an asthmatic walks into his surgery is to say "Bog off, you're unfit". This happens frequently, and who can blame the doctors?

However, while it might be defensive medicine, it is not necessarily good medicine. Indeed, such subjective pronouncements often motivate the candidate to go to another doctor and lie about having asthma.

There is now an alternative informed consent basis of assessment. Fundamentally, this means clearly and comprehensively explaining the risks of diving to the candidate, and letting him make an informed choice about whether to proceed. However, there are some important provisos. In the context of asthma, most dive physicians would agree that the more active the asthma, the greater the risk in diving. Those candidates who suffer serious attacks, wheeze relatively often or who use reliever medications regularly, cannot be considered for diving, even on an informed consent basis, because rightly or wrongly, the risks are perceived to be too high. On the other hand, previous asthmatics and milder cases may be subject to little extra risk, and it is reasonable to let them, as intelligent adults, make up their own minds on the matter.

Every day of our lives we make decisions that inherently involve weighing risk against benefit. We choose to get on planes, we choose to play rugby, we choose to ride bicycles on busy roads, all because we decide the benefit outweighs the risk. There is no reason diving should be any different in this regard, although dive candidates are much less well-informed about its inherent risks than they are about these other intuitively obvious risk situations. It is the dive physician's role in this setting to sufficiently educate candidates so they can make an informed choice.

A sensible approach to the asthmatic dive candidate is to first take a detailed history of his problem. The obvious active asthmatics are told they cannot dive, and the reasons are clearly explained. Asthmatics who have not experienced symptoms of asthma or have not used medication for years are usually able to dive without any special investigations.

The most problematic are mild asthmatics i.e. those candidates who wheeze once or twice a year when they have colds; or who wheeze a little in the spring when certain pollens are around, etc. With these candidates, a long discussion about the potential risks in diving implied by their asthmatic history, is usually followed with tests to check that neither exercise nor the breathing of nebulised salt water (at the same concentration as sea water) provoke airway narrowing. If these tests are negative and patients exhibit a clear understanding of the issues and wish to proceed, then we should be happy for them to dive. Unfortunately, to conduct and document this process properly is a time consuming and expensive exercise, but at least it's better than being told to "clear off" without so much as an explanation.