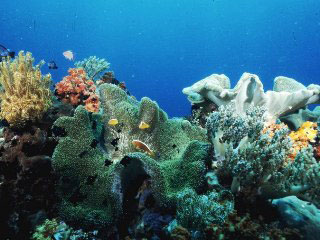 Coral reefs around the world are under siege - FACT. Threats from over-fishing, urban coastal encroachment and rising sea temperatures are destroying sensitive corals and devastating the marine life they support.

According to The United Nations, in the last 4 years 10% of the world's reefs have died, and nearly a quarter are sick and suffering. Think about that for a second ... More than half of the living reefs are seriously threatened, and scientists estimate that if today's trends continue mankind will cause the irreversible loss of reef formations and related fish species within 40 years.

Fortunately, there is a growing dedicated global effort to reversing this decline and to finding new - and sustainable - ways to manage the last of Earth's remaining coral reefs.

• Coral reefs are home to more than 25 percent of all marine life - yet occupy less than 1% of the ocean floors.

• Coral reefs have been around 100 million years and are the largest living structures on earth. Australia's Great Barrier Reef is more than 2,000 km long and can be seen from outer space.

• Scientists have found as many as 3,000 different species living on one reef in Indonesia.

• Coral reefs protect shorelines from erosion and storm damage. Without reefs, many islands, in the Banda Sea for example, and low lying mainland would be underwater.

• Coral reefs are a tremendous medical resource, providing chemical compounds used in antihistamines, antibiotics and other medications for illnesses ranging from asthma to leukaemia and heart disease. Indeed, more than half of all new cancer drug research focuses on marine organisms.

• More than 350 million people worldwide depend on corals for food and survival.

• Corals are animals-not rocks or plants-and they come in 2 types, hard and soft.

• Some deep water corals grow very slowly-as little as 30 cm in 1,000 years, while some shallow water corals may grow up to 15 cm per year.

• More than 14 million hectares/35 million acres of coral reefs have been destroyed by human activity - 10 percent of the world's reefs have died during the last 4 years alone, a number that could rise to 20-30 percent by 2010 without immediate and decisive action to preserve and sustain those that are left.

• Global warming is perhaps the most serious threat to healthy coral reefs. Scientists expect sea temperatures to rise several degrees in the next 20 years. When water temperatures get too high, corals turn white or bleach and eventually die.

• More than 75 percent of the earth's people live in coastal areas, bringing to pristine coral reefs such threats as over-fishing, pollution and direct physical damage. Asia's population is expected to double in the next 25 years - the threat of further reef over-exploitation grows as well.

• Fishing with explosives, as in Burma and Thailand, and poisons in Indonesia not only kills fish but reefs as well. In the Philippines, about 180,000 kg of cyanide is dumped into the ocean each year, badly degrading local reefs.

• Sedimentation caused by run-off from poorly planned and managed construction, logging or mining, muddy reef waters with silt, cutting them off from the sunlight they need to survive. There are now no coastal reefs remaining in Phuket.

• Water pollution from sewage, oil and other chemicals can poison coral reefs. Ordinary rubbish dumped in the ocean can also kill coral reef life - plastic bags have been found in the stomachs of reef fish and turtles. Both these degrading activities are taking place in Phi Phi Islands.

• Coastal development, which involves altering coastline habitats and the cutting of mangrove forests, also threatens the ocean's fragile ecosystem. The small group of Thailand dugongs is under serious threat at Koh Turatao due to this very problem.

• Selfish and corrupt national marine park officials allowing fishing boats into supposedly protected waters, to plunder and pillage sensitive and irreplaceable resources. Take a look at the Similan Islands in Thailand for a good example. The surrounding waters light up like a Christmas tree at night, there are so many fishing boats there.

• Recreational tourist activities such as boating, scuba diving and fishing can damage coral reefs if people are careless about grabbing, walking on, or collecting coral. Take a look at the footpaths trampled through the reef beds by surface air-assisted divers at coral Island in Phuket for a very disturbing example.

Reef rescue - what we can do to help

Some of the steps we can take are to:

• Reduce your use of chemical pesticides and fertilisers - they often end up in the watershed and the ocean.

• Follow all local regulations and customs when visiting coral reefs and, when diving or snorkelling. Never touch or stand on a coral reef as even the slightest contact can harm these sensitive systems, especially when repeated by hundreds of divers!

• Recycle - this is one of the biggest things all of us can do to reduce humanity's destruction of the earth and the oceans.

• Support pet shops that sell certified marine species that were not captured by damaging fishing practices.

• Ask your local representatives to increase funding for coral reef research and restoration.

• Never leave rubbish on the beach or in the water.

• Never anchor on a reef.

• Volunteer with organisations working to clean up local waters, and remove invasive species - even if you don't live near the ocean, remember that the health of all waterways (rivers, lakes, bays) affect the ocean, thereby affecting us all.

Komodo is getting a helping hand up life's creative ladder with reef restoration. The Komodo Foundation recently installed a bio-reef system at 3 locations in the Komodo buffer zone off western Flores.

Here's how the artificial reef works - A steel skeletal structure is placed on the seabed with small specimens of living coral attached with wire. When an electrical current is applied, hydrogen bubbles start to form. This triggers a chemical reaction in the seawater that in time removes rust, and at the same time coats the steel with a form of calcium carbonate resembling natural reef, which attracts coral. The ultimate goal is to transform this steel structure in to a multi-coloured self-supporting coral reef structure.

Artificial reefs have been around awhile, but this system uses renewable electricity such as solar power, and is an efficient and cost-effective solution within the reach of poorer areas suffering from coral damage, such as Indonesia.

For the islands of Bidadadri, Punggu and Kukusan in the Komodo National Park buffer zone, the primary devastation has been due to dynamite fishing and a recent crown-of-thorns infestation. Each has wire racks installed and solar panel powering. Now the reefs have a healthy chance of recovering to there former glories.

... Thank you for taking the time to correspond with me in depth during the preparation of the trip ... -- Tim Pope, Santa Barbera.  [More customer reviews]