Turtles are among the most loved sea-dwelling creatures. This is due both to their graceful movement, cute appearance and personality as well as their declining numbers and their need for human protection.

There are several different types of turtles throughout the world so here we concentrate on those you are most likely to see in dive destinations covered by Dive the World particularly Thailand, Malaysia, Indonesia and Fiji. These are commonly referred to as Green Turtles, Hawksbills, Olive Ridleys and Leatherbacks. 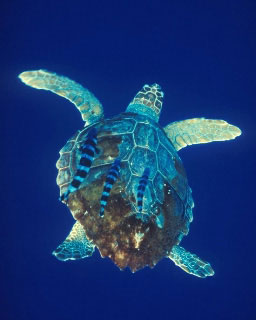 Size differs with species, Olive Ridleys being the smallest at around 60 cms in length and weighing around 45 kgs when fully mature. Leatherbacks on the other hand can grow to as much as 1.9 metres in length and have been known to weigh in at a whopping 916 kg!

Sea turtles are instantly recognizable by their large, streamlined shell and (unlike the land-based turtles) by their non-retractile head and limbs. Front flippers are used primarily for propulsion through the water while hind flippers act as stabilising rudders.

Depending on species coloration may be olive-green, yellow, greenish-brown, or black. Interestingly Green Turtles are so-called because of the colour of their body fat rather than their external appearance.

So how do you tell them apart? Well there are numerous differences between the species but as an introduction let's just look at one way you can identify which is which.

Green Turtles are easily distinguished from others because they have a single pair of prefrontal scales (scales in front of the eyes), rather than 2 pairs as the other turtles have.

Olive Ridleys are olive in colour and look out for the 2 pairs of prefrontal scales and the standard mouth shape.

A Hawksbill has a narrow head with jaws meeting at an acute angle and with its upper jaw protruding out and curving slightly down much like the bill of a hawk, funnily enough.

The vegetarian diet of the Green Turtle consists mostly of algae and sea grass. Olive Ridleys use their powerful jaws to crunch through the exoskeletons of crabs and molluscs. Soft-bodied animals such as jellyfish, squid and tunicates are also eaten by Olive Ridleys as well as by Hawksbills and Leatherbacks. 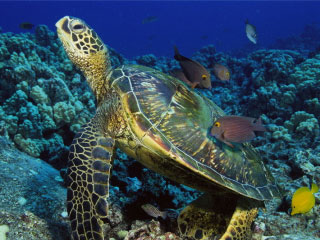 Mating time usually occurs several weeks before nesting season at a time when the company of females is a much sought-after prize. Several males may court a single female and it is a common sight to see a mating couple being rudely jostled by one or more males who want in on the action. At times like these it helps a mating male to keep such unwelcome interlopers at bay by clinging firmly to the female with claws on the front flippers which secure the passionate embrace.

This can be repeated several times a season and, through an incredible sperm storage system within the female's oviducts, she may be able to lay several clutches without having to go through the nasty business of mating again - neat trick, huh?.

When they emerge from their nests the little hatchlings make instinctively for the water guided most probably by the light of the moon. This explains how on beaches with strong un-natural light the little turtles often find themselves heading for the nearest bar rather than the sea.

At long last, when the turtle has fully matured, it will return to the beach of its birth and the cycle of mating, laying eggs, hatching, and the babies running for their lives will be repeated all over again.

The vast majority of hatchlings will, of course, die young, falling prey to dogs, seabirds, crabs and hungry fish. Those that do make it will remain solitary until they too feel the urge to mate.

Those that negotiate the difficult early years and make it to adulthood encounter few predators, mostly large sharks in particular Tiger sharks.

All of the 4 species featured here can be found in the Indo-Pacific region. Other types of turtle are indigenous to specific areas for example the Black Turtle to the Americas and the Flatback to Australian waters.

Loss of breeding grounds due to beach development is a particular concern given that some beaches which once witnessed thousands of turtles coming ashore to lay their eggs now see but a few. Human development, bright lights, rubbish and activity can all discourage females from nesting. 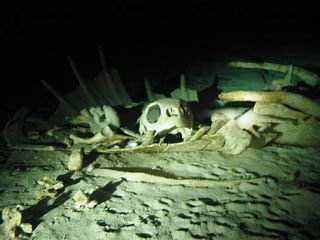 Discarded flotsam such as plastic bags are often mistaken by the turtles as jellyfish with deadly consequences. Shrimp nets and other fishing apparatus also account for great numbers of turtles who become entangled and just like we would, run out of air and drown.

On a local scale the resorts on Sipadan Island, for example, have been closed to tourists since January 2005 allowing an island which was previously full of nesting turtles to be given the chance to return to its former status. Countless other resorts in such spots have accommodation raised on stilts to allow the turtles free movement. Many also adhere to strict rules regarding external lights at night and guests behaviour in relation to nesting.

However the intentional and accidental killing goes on, outweighed by commercial reasons. Steps are being taken to reverse attitudes and trends in countries where the meat and products are considered exotic - but this may not happen overnight and as the saying goes 'when the buying stops the killing can too'.

It is clear is that local population numbers all record dwindling turtle populations across every species and the forecast for the future of the turtles on current rates of killing is bleak. Although a CITES listing has slowed their decline much more needs to be done to reverse attitudes and therefore preserve the turtle for generations to come.

Where Can You Dive With Turtles?

Turtles can be spotted throughout Asian waters so here are a few examples of great options available through Dive The World:

Malaysia: Resorts at which to stay for diving with turtles include those in the Sipadan area such as Mabul Water Bungalows.

Thailand: The Similans hosts several sites where turtle spotting is common such as Donald Duck Bay, North Point and Elephant Head Rock. You can dive these from liveaboard cruises in Thailand.

Indonesia: Turtles are also among the sights you can expect when diving in Raja Ampat, Indonesia although you may find yourself distracted with all the other big-fish action around. The best way to dive Raja Ampat is by dive safari liveaboards such as MV Pindito.