Diving is very much a sport that can be enjoyed regardless of sex, but the reality is that women and men are different. So what aspects of scuba diving do women need to pay attention to that men don't?

We are often asked about whether menstruation should be a concern for female divers. Would sharks sense it? Would it put the diver at greater risk of attack or of decompression sickness? Well, in theory women may be more susceptible to the effects of nitrogen because of the physiological effects of menstruation such as fluid retention, but there is little evidence to support the theory.

Diving under medication is generally considered unwise and it might be advisable for women to avoid the use of oral contraceptives when diving. However, again any causal link between the 2 is yet to be scientifically demonstrated, and most consider this to be over-cautious.

Medical advice tends to be that menstruating females may wish to exercise some caution and err on the side of conservatism in terms of depth and frequency of dives.

Many women are concerned that menstruating might put them at risk from shark attack. Sharks indeed have a highly developed olfactory system, said to be capable of detecting chemicals dissolved in water down to a 10 trillionth of a molecule per litre for certain amino acids. So even the smallest quantities can be picked up by a shark. However, just as sharks differ greatly, so too do types of bodily fluids. Menstrual blood is a complex fluid with very different chemical properties to systemic blood. Experiments have shown that sharks are simply not as interested in menstrual blood as they are if an injury to a limb is releasing systemic blood from veins or arteries into the water.

On another reproductive note, diving is generally considered as an unwarranted risk when it comes to pregnant women. As everyone knows, various changes go on in the human body when diving. Additional nitrogen in the blood may damage both mother and unborn child, and the effects of the increased pressure could adversely affect circulation, with both these risks being considered greater the longer into term the woman is. Given the uncertainties of the above it is unsurprising that most women simply follow medical advice and avoid the sport when they are gestating.

Women are shaped differently from men (unless you are in Phuket, where it is just all too confusing!)

A woman's hips and thighs tend to be where her strength is concentrated, which is generally good news for diving - finning and dive ladder egress come to mind. However a lesser strength of upper body can sometimes mean that smaller women may struggle a little with heavy equipment. Using smaller and lighter tanks can counteract this problem. Or, as we all know, a bat of the eyelids can cause that nearby beefcake to lend a gallant helping hand!

Women tend to have a greater proportion of subcutaneous fat than the standard male form, although there is no evidence to suggest that this predisposes women to decompression sickness. DCS has so many factors that diving within accepted recreational limits is likely to keep women just as safe from ill effects as it does for their male counterparts.

Smaller lungs might seem at first to be another handicap when it comes to diving. However, in fact it often means that women enjoy the type of air efficiency that men would love to have. Often women can enjoy longer times underwater, since they take longer to drain their tanks than men, whose each breath draws more air. 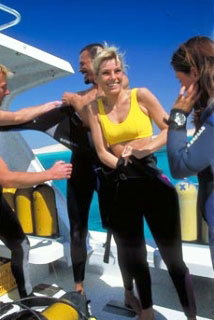 Given our differing body shapes, women may also have a few more things to bear in mind when it comes to equipment selection.

When you go shopping for dive gear you will notice that for the most part there are no female versions e.g. what does a female regulator look like? When it comes to wetsuits however make sure you buy a female one otherwise there could be air pockets where there shouldn't be and tight stretches in awkward places. Comfort is king when selecting dive equipment, so if you can find one that fits your body snugly off the peg, then great. If not, then consider a custom-made wetsuit which can make all your curves look just right!

If you're buying a full length wetsuit, you may also like to consider buying some small ankle weights. These can offset the positive buoyancy effects of ladies calves and neoprene, that can cause some women to struggle to swim in a horizontal position.

There are also many buoyancy control devices (BCDs) designed for the female form, and indeed some even have a bodice to ensure a superior fit. So check out the big brands for female BCDs. Since they are a piece of equipment which does not have to exactly mould too much with your body it is much easier for many women to find a suitable BCD than an off-the-peg wetsuit.

As humankind evolves, one thing we are losing is our hair.

Presently that is much more visible among the male of the species than the fairer sex. For most, a swim cap or a simple pony tail will suffice, otherwise you might end up looking like some sort of underwater medusa. Comb-in conditioners or olive oil can help to maintain softness. However, colour can often be the greatest concern with salt water and sun being responsible for leaving coloured hair in a washed out state. Often it is a case of simply planning ahead. If you don't want to go for the short-cut look, then plan your colouring job for after your return, bring a few softening products and plenty of scrunchies.

So there are a few issues that women have to consider when it comes to scuba diving. However, there is nothing to suggest that, with a little care and preparation, the underwater world is any less inviting and rewarding an arena for women than it is for men. So get out there and enjoy your diving!