It was the Pixar animation Finding Nemo that shot this colourful character to fame. Having always been close to the hearts of divers, the clownfish became an overnight celebrity and possibly the fish most recognised by divers and non-divers alike. 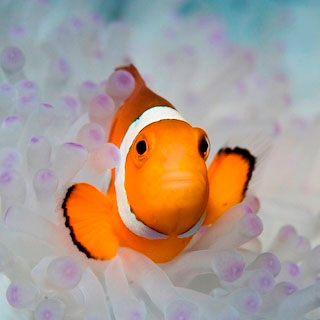 Any given tropical reef is home to at least a few species of anemone with their gently swaying tentacles and they, in turn, are usually home to a clownfish or two.

It's difficult to pass up an opportunity to interact with the playful little fish, rubbing up against the anemone's tentacles and darting forward as if in attack, only to retract again for another bout.

Clown fish usually come in a family of sorts with 3 or 4 members. A female, a mating male and 1 or 2 non mating males who occasionally come out for a gander. Clearly script-worthy subjects, Dive The World takes a look to see what these characters are like off screen.

Thanks to Finding Nemo, even 2-year olds can now identify clownfish. Roundish fins as opposed to sharp, bright orange, 3 vertical white stripes, flecks of black and a detail the movie might have missed, a single nostril.

Like most clowns, the clownfish provides amusement and laughter, and is likely the reason for their name. They playfully dart in and out, charging divers much bigger than themselves with brave abandon, only to high-tail it back to their anemone safe haven.

However, the clown fish is but 1 of about 30 species of anemonefish, so if you quit clowning around, you might see several different types on 1 dive.

Closely related, but not quite the clown we know and love, is the false clownfish (Amphiprion ocellaris). It's not so easy to spot the differences though, as the false clown fish is characterised by 10 (as opposed to 11) dorsal spines. It also has a taller anterior dorsal fin, and the flecks of black around the white parts and on the fins are a little thinner. You'll need a keen eye to differentiate this clown.

A little easier to distinguish from the rest of the family is the brown to red body of the Spinecheek anemonefish. A white stripe runs down the centre of the spine, with 2 pale white bands on its cheeks, making the origin of its name quite obvious.

Tomato anemonefish (Amphiprion frenatus) is a colourfully named cousin. Especially the juveniles tend to be a dark red, but can be blackish. Amongst juveniles 2 or 3 narrow white sidebars are present, while mature fish usually only have 1.

Then you may also have wondered about Clark's anemonefish, or yellowtail clownfish, (Amphiprion clarki) and how it differs from the clownfish. The former has vivid stripes usually, white, black and yellow in colour. There is a definite variation in the pattern according to geographical location. Also, the body is always darker than the tail and 2 white bands are visible, 1 just above the anus and 1 behind the eye. 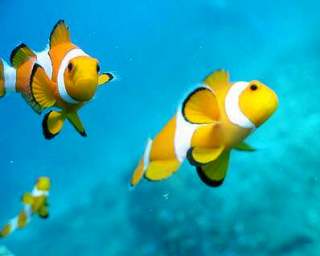 Sea anemones and clown fish live in symbiotic harmony. Even though the anemones stinging cells trap fish as food, the clownfish has a membrane of mucous protecting it against the otherwise lethal anemone.

Some theories suggest that the clownfish membrane is sugar based, and therefore the protein-seeking anemone doesn't identify it as food.

Another theory is that the clown fish, with its odd movements, simply doesn't act like food and that's why it escapes being on the menu. The latter is likely demonstrated when a juvenile clown fish, that possesses no mucus membrane, also seeks refuge in the anemone without any dire consequences.

Although it may seem as if clownfish do not contribute to the symbiotic relationship, scientists believe the clown fish pull their weight by removing parasites from the anemone. It is also believed that through its unique movements, the fish is responsible for circulating fresh water around the body of the anemone.

Clownfish that have adopted a sea anemone as their home will never stray far from it during their whole life and will defend it against attack with dogged determination.

The clownfish's diet is nothing funny, although its eating habits suggest behaviour which is opportunistic rather than predatory. The clown fish hangs around waiting for the anemone to have dinner first before it dines on what's left, uneaten, undigested or excreted.

The clownfish has also been observed munching on delicacies such as parasites, crustaceans, molluscs, the occasional speck of plankton or the odd dead tentacle that it finds on or near its home anemone.

If you were a male clownfish and there was a shortage of females, what would you do? Laugh about it and change your sex of course!

In the clownfish scheme of things a reproducing female heads the 'family' and is partnered by a mating male. 2 non mating males patiently await their turn in the wings. Should the female meet an early demise, the mating male simply turns female and calls a non-mating male to step up to the plate. Like a pyramid scheme with a twist.

The clown fish lays its eggs on a roughly flat surface usually near their host anemone at any time throughout the year. Although the female heads this house, both parents are active in watching over the hatchlings, fanning them with fresh water for up to 7 days. As a survival mechanism, the eggs hatch after dark when it's much safer for the new and vulnerable to come to life. 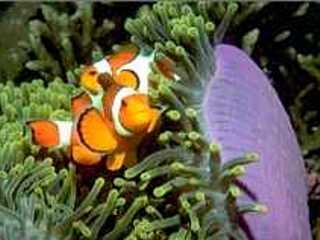 The first thing a hatched baby clownfish does is rise to the surface where it will live the planktonic stage of its life. During this stage it lives amongst the planktonic rafters of the ocean at one with that environment and feeding within it. This stage last 8 - 10 days.

After the trials and tribulations of life amongst the ocean plankton, real life begins for the clown fish as it descends to the bottom substrate to seek out shelter on that perfect anemone.

All clownfish are born male, and unless a spot higher up in the hierarchy happens to be available, the juvenile will always join an anemone as a non-mating male. Only when they've grown large enough for mature gonads, would they be considered sexually mature and could they be in the running to unseat the dominant male.

The clown fish is a sought after menu item of most fish, or it would be if it wasn't for the protection afforded to it by the venomous tentacles of its chosen dwelling. A clownfish is, however, quite vulnerable away from the anemones protective tentacles, which explains why it's never spotted far from it.

Clown fish tend to stick to the warmer waters of tropical reefs and are found in the Pacific Ocean (Fiji), Australia's Great Barrier Reef, the Red Sea and the Indian Ocean (Thailand, the Maldives and Burma). They are not present in the Atlantic or Caribbean.

Part of the purpose of the clownfish's plankton stage is possibly related to distribution and several species overlap in various locations. It wouldn't be out of place in Indonesia and Malaysia, for instance, to spot a variety of clownfish on a single dive.

Besides being cute and a famous star of a popular movie, clown fish have escaped the human threat for a number of reasons: they stick to quiet spots of the reef, they're not exactly dinner worthy for humans and they hang around in small groups.

Unfortunately due to that very stardom, the demand for them as salt water aquarium pets has also increased. Often they have to live without anemones, as anemones are difficult to maintain in aquariums.

Many reefs have been damaged by overzealous entrepreneurs trying to meet market demand, although more and more clownfish are aquarium bred.

A glimmer of hope is governments that have cottoned on to this trend and are now restricting the number of clown fish that may be removed as well as the method of removing them.

But clown fish, as with many other reef inhabitants, remain in danger as their very homes are vulnerable to pollution, destructive fishing techniques and climate change.

Most of the quality dive sites that Dive The World recommends in the Indian Ocean and Pacific Ocean will yield at least a few clownfish.