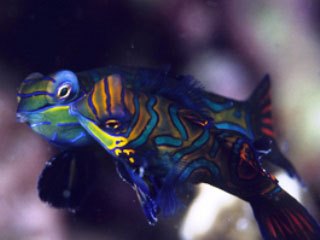 Forgoing your sunset cocktails and scuba diving into the twilight zone will reward you with the amazing sight of mandarinfish mating. Specifically if you are in the Lembeh Strait or tropical waters at Kapalai. These small fish make up for their size with stunningly psychedelic colours in detailed patterns, and splendidly living up to their scientific name of Synchiropus splendidus.

Much sought after by underwater photographers, there is a small window of opportunity at dusk as these creatures are very shy and seem to dislike bright light.

The beauty of their bright colours is hard to describe and best seen for yourself. Creative mixes of orange, blue, yellow, green and purple seemingly painted in ripples along their bodies reminiscent of the robes of Imperial Chinese officers, otherwise known as 'mandarins'. Their swimming movement can be likened to a hummingbird as they tend to hover while fluttering their fins at lightning speeds. This behaviour is strikingly different from the way they hop along the coral formations.

Also distinguished by their uniquely flat and wide heads, mandarin fish are very small, only growing up to 6 cm in length. The males are larger than the females with a much longer 1st dorsal spine. They both have 8 dorsal soft rays and 4 dorsal spines and are easily differentiated from the picturesque dragonet due to their lack of spots. Instead they are decorated with intricate bands of colours.

These little creatures are fussy eaters who inspect their food in a leisurely manner before consuming it. Favouring small invertebrates and crustaceans, their diet mainly consists of small worms, small crustaceans and protozoans.

With eyes set on the sides of their faces, their peripheral vision gives them an advantage when searching out their meals, but their careful approach often means they lose out to more aggressive fish who snap up the tasty morsels from right under their 'noses'.

Sunset heralds their courtship rituals and the more serious scuba divers enter the water to witness the colourful and fascinating performance. Many groups of up to 5 female mandarinfish gather in their territory on the coral, while the males fertilise a number of female groups in 1 night.

Coupling takes place after a female has been won over, most often by the largest and strongest male. Then they position themselves with abdomens touching and the female resting on the male's pelvic fin. Joined in this way they ecstatically ascend above the reef and release a mist of almost 200 eggs and sperm.

No social mores restrict smaller males from frantically releasing sperm simultaneously and thereby hoping to get in on the action. The act done, they all rapidly disperse, abandoning their offspring to the whims of the current. Within 24 hours tiny 1 mm larvae hatch to feed on plankton for 2 weeks prior to establishing their territory on the reef, which becomes their home for the duration of their 15 year lifespan. 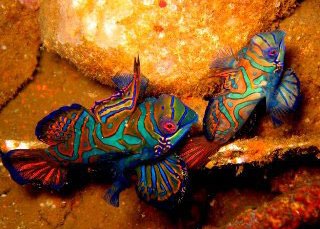 Mandarinfish are targeted by scorpionfish who ambush them at their most vulnerable during their mating activities. The noxious slimy mucous which replaces scales on their skin discourages most marine species and safeguards them from parasites. Any other interested predators are warned off by their dazzling colouration.

Gentle breathing is required when seeking out these non-aggressive, retiring creatures as they are easily frightened and quickly scurry back to their refuges. Living mostly in pairs and groups, they prefer dead and broken coral in sheltered lagoons or on reef crests.

Sadly they form part of the flourishing aquarium industry. Their endearing behaviour and brilliant colouring make them the choice of many would-be owners, despite their picky eating habits and inability to adapt to most artificial water environments, meaning they don't often last in captivity. Indiscriminate and destructive fishing methods are also responsible for endangering their marine habitats.

Dive The World's best recommendations for meeting these fascinating creatures while scuba diving is the Coral Triangle and specifically Kapalai and Mabul in Malaysia and the Lembeh Strait and the Banda Islands in Indonesia.