Beauty and Grace in Motion

Encountering a leopard shark on a dive is an enthralling experience as these graceful creatures are very docile and will allow you to admire and photograph them from a relatively close distance. 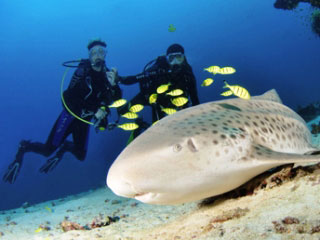 As always with any marine creature, following a few simple steps can enrich your encounter and that of others divers, and prevent disturbing the shark:

• Do not touch the shark. They are normally sleeping through the day and are not used to human contact.

• Approach cautiously and do not stay too close as this could frighten the shark and then it will simply swim away.

Leopard sharks are so-named because of their sandy colouring with black spots. They can grow up to almost 2 ½ metres in length and have a distinguished feature of a very long caudal or tail fin – which is almost as long as their body.

The pectoral or side fins are large and round, and there are 2 long spineless dorsal or back fins set close together. The snout is round shaped and large with tiny barbells or whiskers hanging from the nostrils that are used to detect prey. The eyes are very small and situated on each side of the head with spiracle holes directly behind which feed water to the gills.

Leopard sharks are almost always accompanied by remoras, a type of sucker fish which feed off dead skin and parasites.

Leopard sharks are harmless and very docile, mainly because they are nocturnal and tend to sleep during daylight hours. Most divers spot them resting on the sandy sea bottom. They have the unusual ability of being able to draw water over their gills so they don't need to be moving in order to breathe.

Hunting for prey at night, the leopard shark searches in cracks and crevices for crustaceans such as crabs and shrimps, as well as gastropod snails, bi-valve molluscs and sea snakes. Sometimes they may eat small bony fish too. The jaws are small and designed for holding and crushing.

Leopards sharks, like all male sharks, have 2 reproductive organs located along the inside of the pelvic fins. These tube-like organs are called claspers and are inserted into the female's reproductive tract during copulation.

As they are oviparous, young sharks develop in dark-coloured leathery eggs which are laid by the mother in January or February. Hairy fibre tufts on the egg case help to keep them gripped to the sea floor. The young are fed from a yolk sac inside the egg until they hatch after 170 days incubation when they are around 20-25 cm long.

Juvenile leopard sharks look completely different to adults and have a dark brown to purple black colouring with pale coloured blotches or stripes which gave rise to their other name ‘Zebra sharks’. These young sharks are around 25 cm long and live in groups in shallow waters for protection. As they grow to between 50-90 cm, the zebra banding fades and at over 90 cm they have their full leopard markings and move to deeper waters. They reach maturity at around 4 years old when they are about 1.7 metres long.

Leopard sharks have no predators except the bigger species of shark. As is often the case with larger marine creatures, humans pose the biggest threat to their survival.

The leopard shark lives in the Indo-Western Pacific region. It can be found in South African waters and the Red Sea, in the Andaman Sea in Burma and Thailand, in the waters off Malaysia, Vietnam, Indonesia and the Philippines, in Palau, Yong and Fiji, south to Australia and north to China and Japan.

As it is a bottom-dweller, the leopard shark spends most of its time on sandy sea beds at a maximum depth of 65 metres. Often found on coral reefs and in lagoons and channels that provide shelter.

Due to the pressures of fishing leopard sharks are currently listed as ‘vulnerable’ and numbers have drastically declined. They are fished for their fresh meat, the fins are sold for shark fin soup or traditional Chinese medicine, and the liver is used to make vitamins.

It has been scientifically substantiated that sharks are vital for maintaining healthy reef and ocean eco-systems. Over the last few years many conservation organisations have been working and campaigning to protect sharks worldwide. However, lack of patrols and law enforcement has done little to help in some parts of the world.