The tawny nurse shark is a rather unusual fish. You have probably seen them lying on a sandy seabed or huddling together. Their distinctive mouths and whiskers make them easy to identify from other sharks. Where are their teeth? Are they dangerous? Let’s find out … 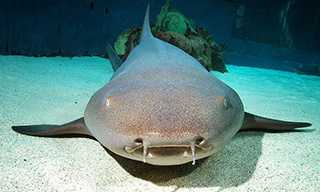 There used to be several species of carpet shark, with the nurse shark being the last surviving member. There were 39 species named after their ornately patterned skin. Tawny nurse sharks' skin colour varies from a reddish-brown to blueish-grey, with the chameleonic ability to modify their colour according to the environment.

The tawny nurse shark has tiny eyes, a squarish snout and a broad, flattened head with a cylindrical, ridge-free body, quite similar to the nurse shark found in the Atlantic and East Pacific. Their most distinguishing feature is their pectoral fins which are sickle-shaped. They also have very soft skin and the Greek term ‘Nebrius’ means ‘skin of a fawn’. They have barbels and 30 rows of overlapping teeth!

They are often seen resting on the sea floor where they can remain motionless for long periods. They breathe via buccal pumping, a process of using their cheek muscles to pull water in and over their gills. They tend to be calmer than other sharks, although can strike when being handled, which is when their size and strength command respect.

Unlike other sharks, tawny nurse sharks thrive in aquariums and are easily handfed. They can produce a grunting sound, most often in between spits of water at aggressors, particularly fishermen.

These nocturnal sharks prey at night, slowly prowling over short ranges. They feed by moving along the bottom and then creating a strong suction action to inhale their meal. They can also use brute force to attack prey on reefs. Among their favourite meals are octopus, surgeonfish, sea urchins, crabs and lobsters.

Males and females both become sexually active when they attain the length of about 2.5 metres. Their reproductive rates are low and little is known about the frequency of their reproduction. 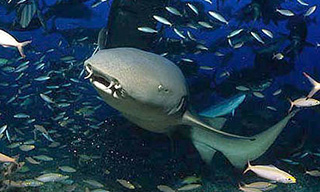 Tawny nurse sharks are aplacental viviparous, meaning they ‘hatch’ from egg capsules before birth. In the womb they feed on eggs produced by the ovary. Up to 8 can be born live, normally measuring around 40 cm.

Juveniles have small dark spots on their skin, although little is known about their young lives. Some evidence suggests they can stay with their mother until around a year old. The young are known to rest on their pectoral fins which are tucked in under their bodies.

Excluding humans, tawny nurse sharks have few natural predators but they include bull sharks, great hammerheads and tiger sharks. Oddly their greatest enemy may come from within, with 5 species of tapeworms having been found in their intestines.

Tawny nurse sharks can be found on seagrass beds, rocky and coral reefs and sandy flats, from very shallow water to around 70m. Normally they stay within recreational scuba diving limits! They are found throughout the Indo-Pacific region, from South Africa to the Maldives, and from Australia to Japan.

Their local habitats are under threat from unsustainable fishing practices like fish bombing and poisoning. They are also frequently caught by sport fishermen and commercial fisheries, either on purpose or as by-catch by trawlers, gill nets and long line fishing.

The meat is used for fish meal and its liver used for oil and vitamins, its fins are used in the Oriental shark fin trade, and its skin for purses.

The tawny nurse shark is classified as vulnerable on the IUCN (International Union of Conservation of Nature) Red List.

... I had a very good attention from your people, who were very professional and attentive ... Nothing to complain but on the contrary, good service ... -- Marcio Dos Santos, Portugal.  [More customer reviews]