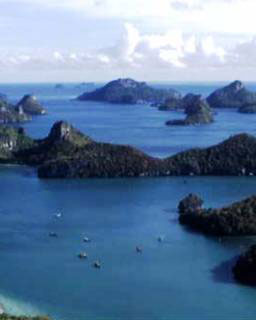 Mu Koh Ang Thong National Park is an archipelago in the Gulf of Thailand consisting of 42 separate and small islands. All the islands occur in the Ang Thong district, of Amphur Samui, Surat Thani Province. The park covers a total area of 102 km² of which about only 18 km² is land. The park does not encompass the entire island chain, its jurisdiction covers only about 82% of the total area. This Thailand national park was established on 12th November 1980. 'Ang thong' means Golden Bowl in Thai. (and Mu Koh means 'group of islands').

Most of the islands consist of limestone mountains which rise from the sea to 10-400 metres above sea level, with many strange erosion-formed cliff faces, deserted beaches and rainforest areas. The islands are visible from Koh Samui but they are geographically quite different, rising much more dramatically upwards.

The coral development on the islands is not extensive and is restricted to a narrow band encircling each island close to the shore, especially on the southwestern and northeastern sides. Although the northwestern side of the islands is the area most influenced by the monsoon, in sheltered spots some good corals develop. These include elephant's tusk coral, brain coral, staghorn coral and in deeper water, plate corals of the genus Pavona, and flower corals of the genus Goniopora.

Animals found inhabiting these reefs include; Butterflyfish, Angelfish, Parrotfish, Stingray, Black tip shark, Grouper and Cowrie shells. In areas where the water is not so clear or is subjected to strong currents the species diversity is poor and is dominated by Seaworms, Crabs and brown seaweeds, of the genus Sargassum and Turbinaria. In places with steep rocky shorelines or where the water is very turbid, coral cannot survive. In these areas sedentary marine life is prevalent including; Sea fans, Oysters, Clams and Mussels, which can be seen covering the exposed rock surfaces.

The surrounding seas are a major spawning ground for the short-bodied mackerel which are a popular Thai meal. Mackerel, anchovy and squid are all caught commercially in the area.

The islands of the park are covered in forest, of which there are 4 types:

Mu Koh Angthong National Park receives approximately 2,000 mm. of rain fall in a year. The best time for visiting the islands is between February and October, when the sea is calm, suitable for swimming, snorkeling and sailing. The water is clearest around March/April time. This is also the hottest time of the year.

During November and December the Gulf of Thailand can experience large waves and strong wind, making boat travel to Ang Thong National Park hazardous so the park office is temporarily closed each year from 1 November to 23 December.

Around the Angthong Islands 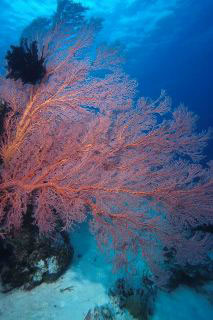 Some of the more notable island attractions are:

Kha Bay on Wua Talap Island is where the national park HQ is located. There is a small visitors centre and restroom facilities here. In front of the office is a clean white beach that's good for swimming. The viewpoint at the top of the mountain, about 500 metres above sea level, offers views of all the Angthong islands. Short boating trips and snorkeling trails have also been designated. Bua Bok Cave, 1 km from the office, has beautiful stalagmite and stalactite formations.

Thale Nai (or Lake Nai) in the mountains, is on Mae Ko Island. It is a large natural pond surrounded by limestone mountain. The area has an underwater hole connected to the outer sea. Mae Ko Island also has a pretty beach.

Samsao Island, opposite Mae Ko Island, has one of the best coral reefs in the area as well as a natural stone bridge that curves out into the sea, and white sandy beaches suitable for camping and swimming.

The sea surrounding the islands is shallow, mostly around 10 metres deep. The islands rise up out of the water and are thus surrounded by water which is relatively shallow. The water is affected by the turbid river water run-off from the mainland. The river water does not encounter deep water and therefore does not reach a velocity sufficient to carry sediment away; instead it settles, making the water around the islands fairly turbid all year round.

... Dive The World's strengths were prompt response for any requests and seeking proper alternatives when my original preference is not available ... -- Seung An Park, South Korea.  [More customer reviews]