Indonesia Tourism - Things to Do in Sulawesi

Celebes, the 'Spice Island' is an oddly shaped island in the north of Indonesia and is home to world-famous dive destinations such as the Lembeh Strait, Bunaken and Bangka (all near Manado), and Wakatobi - places high on the wishlist of scuba divers everywhere.

You always know the diving is good where there are lots of underwater photographers, and most make trips to Sulawesi. With the amazing array of macro-life and sheer numbers and variety of fish to be found in this most colourful underwater world, it is little wonder that so many come back here for diving vacations year after year. For them, there is nowhere quite like Sulawesi.

It is believed that the name 'Sulawesi' originates from "sula" and "besi" combining to mean island of iron, due most likely to the rich iron deposits in the Danau Matano region. The island lies to the east of Borneo, to the west of the Moluccas, and has a common border with the Philippines due north. Makassar (Ujung Pandang) in the south and Manado in the north are the 2 main cities, both having good connections to the rest of Indonesia.

The island is divided into 5 provinces: South, Southeast, Central, Gorontalo and North Sulawesi, it has a coastline estimated at some 5,650 km and an overall area of around 190,000 square kilometres. Unlike the other regions of Indonesia there are few active volcanoes here, just some on the north east and south east parts. The island is surrounded by deep waters. The Sulawesi Sea north of the island reaches an approximate depth of 6,200m. This is why the surrounding waters of the island offer the chance to dive with big pelagics as well as some of the finest and most colourful coral scenes on earth.

• View a map of Sulawesi

North Sulawesi is a great place to take in some Minahasan culture such as the main traditional dances. The most exciting is a war dance called the Cakalele a word derived from the words for "fight" and "shout". That says it all. Warriors bedecked in blood red outfits with an array of hornbill beaks and feathers on their heads stomp around in goggle-eyed fury. They scream and engage each other in a fight which thankfully these days has no more grisly purpose than to entertain tourists. 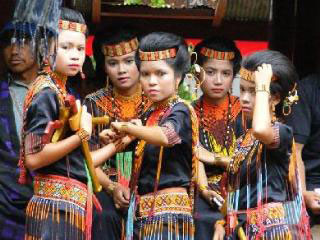 In the south, a little over 11 km from Makassar is the magnificent Ballalompoa Museum which houses a vast display of royal regalia including a remarkable stone-studded gold crown weighing 1,769 grams. This you must specifically request to see.

Anti-colonial hero, Sultan Hasanuddin (1629-1690) has his huge crypt along with other kings of Gowa) in a secluded cemetery about 8 km from Makassar. Just outside the cemetery is the Tomaurung stone on which the kings of Gowa were, in all their magnificence, crowned. Nearby is the oldest mosque in the area which was built in 1603.

140 km from the capital you will find the largest cave in South Sulawesi, the legendary cave of Mampu. Amazing stalagmites rise up from the floor and stalactites grow down from the ceiling (tights come down!) and there are innumerable tales to hear about those formations that resemble animals, spirits and legendary figures of the past.

The delightful Bantimurung waterfalls are about 41 km from the Makassar. In addition to this fantastic cascade are the brightly-coloured ornithoid butterflies (indigenous to this area) which are considered among the most beautiful in the world.

The Moramo Waterfall in the south east is widely believed to be the finest example in Indonesia. It stands at a height of some 100 metres traversing a 2 km plateau and has 127 separate terraced plumes. In all, an awe-inspiring scene. Only 65 km east of Kendari, Moramo Waterfalls is easily accessible by car, or by making the very pleasant crossing of Moramo Bay by boat.

First-time visitors should make sure to take a trip to the Torajan communities of Tan Toraja in the South. Here are the famous Toraja Tombs; man made caves cut into sheer cliff faces, with eerie effigies on suspended balconies staring out across the jungle. This is a great place to visit but can get busy during funeral high season in July and August.

Although November to April normally sees the wet season in Sulawesi, in the central and northern parts the rain is more evenly spread during the whole year. The southeast province tends to see the smallest rainfall. The climate and temperature also vary a lot between lowland and highland. This allows for cool, misty walks in the hillsides and working on that tan by the beach.

Both the cities of Makassar and Manado have a good number of hotels and restaurants as well as bars and karaoke lounges, and are really the only option on the island for any kind of nightlife.

Throughout the island you will find plenty of simple Rumah Makans selling inexpensive Chinese and Indonesian dishes with baked fish always high on the agenda.

Spices are what the north is known for and you can buy vanilla, cinnamon, and nutmeg in souvenir shops throughout the region. Cloves are also omni-present and, for a change, why not take home a figurine made of cloves as a holiday memento?

Blue minibuses (Mikrolets) are the most popular form of transportation in most areas of Sulawesi. Check out the front windscreen to see the destination, and unless you are travelling a great distance these tend to cost almost nothing.

There is a pretty good bus service in the north of the island. Get to any bus station around Manado via Pasar 45 for travel destinations outside town. Makassar and the south west is also well served but it should be noted that overland journeys here can take a very long time. Buses to Gorontalo (about 10 hrs) leave several times a day from Malalayang terminal in Manado, south of town. The highway goes all the way to Makassar, so give the buses a try if you can tolerate the 3 day haul. Allow for possible delays during wet weather.

Trundling along in a traditional horse-drawn cart is surely the most picturesque mode of transport for holiday makers in the north. Say Cheese!

Some taxis don't use meters (Dian Taxis do), so if you need a taxi, negotiate wisely. On Sundays, late at night and during rush hours taxis can be hard to find. Using a Kijang in the south west is probably your best bet as the bus service can be erratic.

Another option for touring Sulawesi is to hire a car with driver (rates per hour or per day).

Ojek is the name for a motorbike taxi which, although quick and convenient can sometimes be expensive.

Boats sail on a fortnightly basis from Makassar and Manado to various destinations around the island and are often a better choice than overland trips.

Among the 13 million who live on the island there are over 50 different languages. The principal ethnic groups are the Minahasa in the north, Bugis in the south, and Toraja in Central Sulawesi. The highest profile tribe here are the Toraja, known for their unique funerals and offerings.

Due to the proximity of the Philippines, North Sulawesi is pre-dominantly Christian. Most in the south are Muslim, despite the late arrival of Islam in the 17th century. In the central region the tribes maintain their old, traditional religions. The 19th century Ban Hin Kiong temple, the oldest in east Indonesia, is the worship place of Chinese Buddhist believers and can be found on Jalan Panjaitan in the centre of Manado.

In February a traditional Chinese parade dating from the 14th century is held to mark Toa Peh Kong.

There is evidence of Indonesia's earliest inhabitants throughout this island, whose history is a catalogue of internal and external battles.

As early as 670 AD the leaders of the different disparate tribes of the north, who all spoke different languages, met by a stone called Watu Pinabetengan. It was there that they founded a community of independent states bound together to fight any common enemies that might attack.

Sulawesi was given the name of Celebes by the Portuguese, who in 1512 were the first European arrivals, shortly followed by Spanish missionaries preaching their way down from the Philippines.

1530 saw the first kingdom on the island, Gowa, whose capital was Makassar (then renamed Ujung Pandang for some years). Makassar was a busy port and a centre for the trade with the eastern parts of the Indonesia. In the early 1600's a battle raged between Gowa and Bone their rival in the southern area where the Bugis people ruled. The triumph of Gowa saw Islam spread to the whole of South Sulawesi.

Not until the middle of the 1960's did a period of sustained peace come about here and since then, the people of the island have been enjoying economic dividends in the form of rapid growth and prosperity unprecedented in Indonesia.

... I am able to confidently book online ahead of time and can enjoy the rest of my vacation knowing the dive trip is in good hands ... -- Marilynne Crawford, USA.  [More customer reviews]